Goodbye to Daisy, Missionary of the Holy Face

Our dear friend and fellow pilgrim, Daisy Neves, went into the arms of our Lord on March 29, 2019.  Daisy joined us on our first pilgrimage in October 2008 and continued to travel with us on six additional pilgrimages.  So, she traveled with us seven times — our first pilgrimage, four Easter pilgrimages, the Beatification of John Paul II, and our first Foundation Pilgrimage to Russia in July 2014.  After joining us on our first pilgrimage, she called me to share her thoughts.  She said, “Deb, you and Robert have created something extraordinary. I have traveled on over 25 pilgrimages in my life and your pilgrimage was unique.  It was filled with wonderful encounters and there was room for the unexpected.  You must continue to do more and I will come.” After Daisy’s call, we agreed that we should plan another pilgrimage, some day in the indeterminate future.  Yet, she persisted, calling us again and urging us to continue.  So, we finally decided to schedule our first Easter pilgrimage, and, as they say, the rest is history… 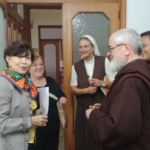 Daisy returned to the shrine three more times with Inside the Vatican Pilgrimages, where her growing devotion to the Holy Face of Jesus was nurtured, and inspired her to bring this devotion to places in the world where it had previously been little-known. (Photo, left – Daisy Neves with Fr. Carmine Cucinelli, Sr. Petra-Maria Steiner and her son Erwin during her last visit to the Shrine of Manoppello, October 2018)

Daisy taught me and all she encountered how to be a better person just by her presence; she was her own person and stayed true to herself, yet, first true to her beloved, Jesus.  We stayed in touch every few months during these past 11 years, and mostly she would share news of the new territories to which her mission brought the devotion to the Holy Face — the United States, the Philippines, Italy, Indonesia, Canada and France.  In the Philippines, there are churches built and dedicated to the Holy Face of Jesus, all because of a simple soul: Daisy.  She was always filled with joy, whether enthusiastically sharing with strangers her devotion to the Holy Face, or persuading us pilgrims with a smile, despite our running late to the Vienna airport, that she had to stop for “a little something” before we continued on to Rome on our first Urbi et Orbi Foundation Pilgrimage in July 2014.

The extraordinary way in which Daisy lived her life for Jesus is an example for us all.  To the many pilgrims who knew her by traveling with her on any of her seven pilgrimages, her humble but joyful witness showed us that all we need to do is take one little step, then another, and another… and before we realize it, we have created a beautiful work for God!

Below is a letter from Peter Anderson  from Tuesday, May 14, 2019.
On Saturday, I went to the funeral of Daisy Neves at St. Madeleine Sophie parish.  I have known Daisy for a number of years.  She was truly a remarkable person and in many ways a saint.  I am sure that you know about the Holy Face image in Manoppello, Italy.  Pope Benedict made a special pilgrimage to see the image in 2006.  The image is within the archdiocese of the very well-known Archbishop Bruno Forte of Chieti-Vasto.  The Archbishop is a great supporter of the image as shown by the following interview of him.
https://www.catholicnewsagency.com/news/an-encounter-with-the-manoppello-image-of-the-face-of-christ-95030
Daisy did so much to spread the devotion to the Holy Face worldwide.  After she died at the end of March, the rector of the basilica where the image is located conferred on her the title, “Missionary of the Holy Face.”  On April 22, Il Centro, the largest newspaper in the Abruzzo region (one of the states of Italy) published a story on Daisy entitled, “Goodbye to Daisy, Missionary of the Holy Face.  She brought the Holy Face to the USA and the Philippines.”  I have pasted below a photocopy of the story with an English translation that I obtained on the Internet.    If the contribution of Daisy was so recognized in Italy, wouldn’t it be good if Daisy story was also known in her home archdiocese of Seattle?  I think that it would be a wonderful story for the Northwest Catholic.  I thought that Archbishop Sartain might be interested in this story as well.
There are so many stories to tell about Daisy’s missionary work involving the image.  Not only did she spread the devotion in the US and the Philippines, but also in Lebanon and Italy.  A book by Paul Badde (one of the experts on the image), entitled The Holy Face of Manoppello, has recently been published.  Daisy is a very important character in his story.  Daisy was blessed with certain financial resources that she used to promote the image, including sending the rector of the basilica on trips to spread devotion to the image in various parts of the world.  One amazing story in the book especially caught my attention.  As part of the effort to promote the image in Italy, an replica of the image was brought to St. Peter’s in Rome.  Daisy was very much involved in this effort.  Part of Badde’s description is as follows: Daisy “invited the entire Manoppello community to come to Rome to dine together on Saturday, January 16 [2016] at La Vittoria restaurant [at her expense].  It was an unforgettable celebration:  about four hundred citizens of Manoppello made their way to Rome by bus and car for this Omnis Terra Sunday of mercy.”
The original image is enshrined in a large and beautiful metal frame surmounted with a crown.  Before Daisy died of cancer, she had a local artist prepare two exact copies of this elaborate frame.  On the day before Daisy’s last and final stay at Swedish Hospital (where she died), she and a relative placed in the Blessed Sacrament chapel at St. Madeleine’s one of the frames with a beautiful and transparent exact replica of the image.  It is now there permanently above the tabernacle.
People in the Seattle area should really know about her story!!
Yours in the Risen Lord,
Peter Anderson 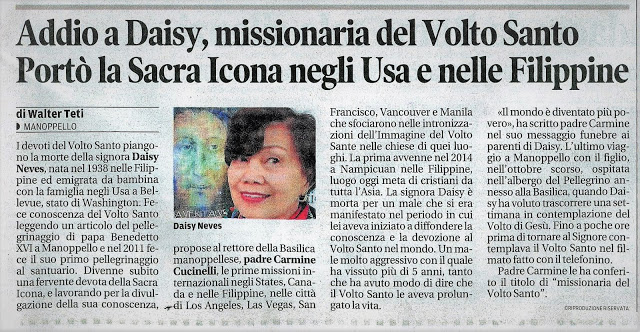 Article on Daisy Neves Appears in Il Centro Newspaper of Abruzzo, April 22, 2019
I am very grateful to Antonio Bini for sending a copy of the article by Walter Teti which appeared last week (April 22, 2019) in Il Centro, the newspaper of Abruzzo, Italy.  What follows is my translation of the article. Goodbye to Daisy, Missionary of the Holy Face.  She Brought the Holy Face to the USA and the Philippinesby Walter TetiThe faithful devoted to the Holy Face are shedding tears upon the death of Mrs. Daisy Neves, born in 1938 in the Philippines and immigrant as a young child with her family to Bellevue, Washington state, in the USA.  Coming to know of the Holy Face upon reading an article about the pilgrimage of Pope Benedict XVI to Manoppello, she immediately became fervently devoted to the Sacred Icon and worked for the promotion of knowledge of it. Daisy proposed to the rector of the Basilica of Manoppello, Fr. Carmine Cucinelli, the first international missions to the United States, Canada and the Philippines, to the cities of Los Angeles, Las Vegas, San Francisco, Vancouver and Manila, which resulted in the enthronements of the Image of the Holy Face in churches of those localities.  The first enthronement occurred in 2014 at Nampicuan in the Philippines, which today is the goal of Christians from throughout Asia.Daisy died as a result of an illness which appeared during the period in which she began to spread in the world knowledge and devotion to the Holy Face.  A very aggressive illness, with which she lived for more than five years, so much so that she came to say that the Holy Face prolonged her life. “The world has become poorer”, wrote Fr. Carmine in his funeral message to Daisy’s relatives.  During her last visit to Manoppello, accompanied by her son, she stayed at the Pilgrim Hotel adjacent to the Basilica.  She wished to spend a week in contemplation of the Face of Jesus.  Until just a few days before returning to the Lord she contemplated the Holy Face on a video she made with her cellphone. Fr Carmine has conferred on her the tile of “Missionary of the Holy Face”.
Katie Carr2020-02-03T07:30:35-05:00June 6th, 2019|Blog, Encounters, Meet a Pilgrim, Way of the Pilgrim|0 Comments