“What is a dowry if not the riches that a woman brings to her husband?
What are the riches of the Church, in a particular place, if not her saints?” -Leonie Caldecott

We have carefully budgeted our Classic Pilgrimages for travelers so that they can experience the unique qualities of Inside the Vatican Pilgrimages at our most affordable price, without sacrificing Inside the Vatican integrity and style. This pilgrimage is limited to 22 pilgrims. We cap the number of pilgrims because we want to keep each pilgrimage as intimate as possible.

In 2020, England was re-dedicated by its Catholic Church as the “Dowry of Mary” — as it was called in more ancient times — in an effort to deepen and promote devotion to the Mother of God in England. The title originated in the medieval period, when devotion to Mary was particularly strong.  It was believed that England belonged in some special way to Mary, who was seen as the country’s “protectress” and who, through her powers of intercession, acted as the country’s defender or guardian.

Walsingham is one of the oldest shrines to the Mother of God; and in pre-Reformation times, it ranked with Jerusalem, Rome and Compostela as one of the most visited shrines in Christendom. The message of Our Lady at Walsingham is very simple: she asks us to “share her joy at the Annunciation,” where her Son became our Savior. In preparation for the 2020 commemoration, a statue of Our Lady of Walsingham went “on tour,” visiting all of the Catholic cathedrals of England.  Join us on this pilgrimage as we, too,  journey through England, both outwardly and inwardly seeking Our Lady, and deepening our own devotion to her. 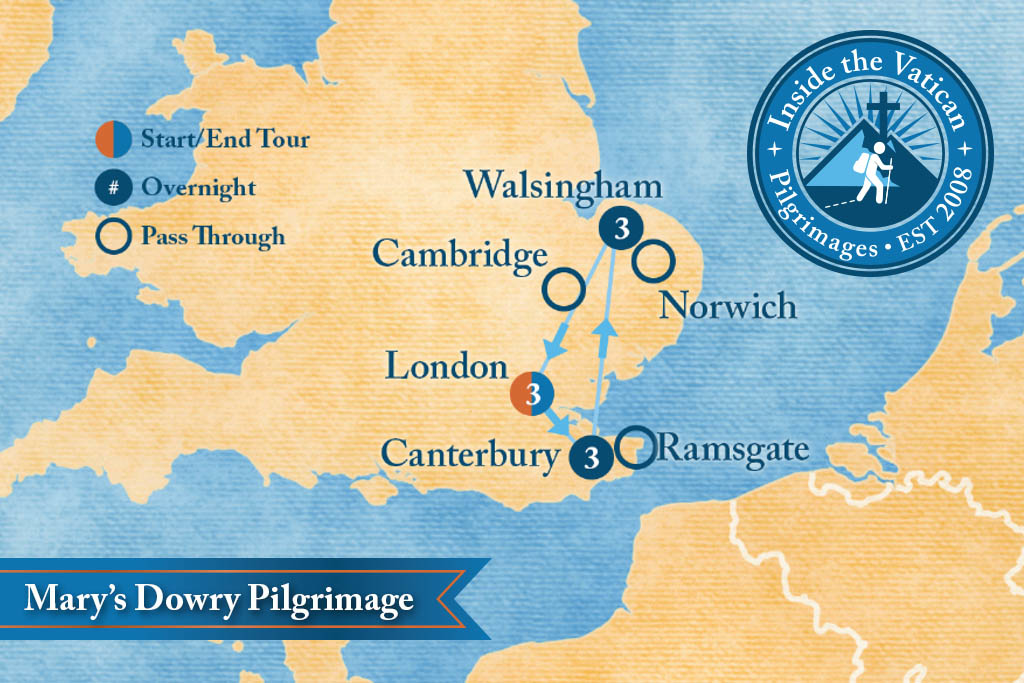 The Information and Registration Packet is not yet available. Contact us for more information.