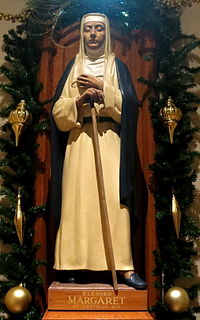 Statue at her shrine in Saint Patrick’s Church in Ohio.

Citta di Castello in Umbria – Sixteenth-century walls circumscribe and embrace this city of the Upper Tiber Valley, and give it a charming urban character.  Located east of Arezzo and north of Perugia, the city is well known for its quaint commercial areas.  Though originally a thriving pre-Roman town, its glory now is found in its well-preserved medieval and Renaissance buildings.  The city is easy to walk around, sprinkled with small piazzas and enlivened with street markets alongside modern shops.  The Monastery of St. Veronica Giuliani (Monastero Santo Veronica Giuliani) and the Church of San Domenico (Chiesa di San Domenico) are not major tourist sights in the city, but they house two of Italy’s great mystical saints. (Heater, 201)

In 1287, Blessed Margaret was born in the Castle of Metola to an honored soldier and a noble mother.  The day of her birth was expected to be a day of joy and that a son would be born.  However, upon Margaret’s birth, the parents were ashamed of her.  She had been born blind, lame, and ugly.  For these reasons, her parents sought to hide her from the world.

Until she was six, Margaret was allowed to walk about her parents’ house, as long as she did not meet with anyone who did not live there.  When she was six, her parents decided to “imprison” her in the local church of Metola.  But, in 1305, the area in which the church was located was attacked; so, Margaret’s father arranged for her to stay in a vault within the family palace.  Two years after moving their daughter into the vault, Margaret’s parents heard of miracles being done at the tomb of Fra Giacomo in Citta di Castello.  They decided to take her there and pray at the tomb.  But, when the daughter’s physical appearance did not change, they abandoned her.

Having been left by her parents in the Church of St. Francis, Blessed Margaret made some friends, who helped her to beg for food and find shelter when she needed it.

After a year of begging had passed, Margaret was invited to join a local convent, where she stayed for another two years.  However, Blessed Margaret’s strict adherence to the Rule of the convent disturbed the other nuns.  And so, at the end of two years, was asked to leave.

In 1311, Blessed Margaret joined the Order of Penance of St. Dominic, being the first young, unmarried woman to do so.  She remained a part of this order until her death, taking care of the sick and disabled as well as the imprisoned.

Margaret died on April 13, 1320 at the age of 33 and her body was placed in the Church of San Domenico.  In 1558, the body of Blessed Margaret was found to be incorrupt and remains so to this day.  She was beatified in 1609.

Blessed Margaret is the patroness of the unwanted and the disabled.

A Pilgrim’s Prayer to Bl. Margaret

With your inner eye,

Teach me to see the purity of spirit.

With your inner beauty,

Teach me to love my soul

And the souls of others.

With your heightened surrender,

Teach me acceptance and resignation

To all that God sends me.

Guide me to be heroic for God.

Teach me constancy and peace.

With your great heart,

Be an example to me of how to love

Always in any situation.

Prod me into the joy

Which comes from surrendering