Hero of the Sacred Mountain

Featured above is the Holy Altar in Sotto il Monte,  St John XXIII

Do not walk through time without leaving worthy evidence of your passage.— St John XXIII

The “Hero of the Sacred Mountain,” or as more affectionately called by the faithful of his time, “good Pope John” —  was born Angelo Roncalli on November 25, 1881, to a farming family in a little village outside of  Bergamo in Northern Italy.  The story is told of his pregnant mother taking her young children on a short pilgrimage to the shrine of the Madonna delle Caneve where she lifted Angelo frequently so he could see the Madonna and told him that she had consecrated him wholly to the Madonna. Having learned to read and write, Angelo kept a diary for sixty seven years chronicling his earthly pilgrimage seeking perfection as he journeyed back to the Father.  His diaries and other writings were compiled into the published work entitled, Journal of a  Soul.

Linda Vardey describes his life in her book, Traveling with the Saints in Italy, as follows:

It is a miraculous story of how a soul thirsting for perfection, who began “life under the mountain” (the name of his village being Sotto Il Monte), pulled himself and all Christians up a spiritual mountain to view their lives of faith from a higher and different perspective. After three years of preparation for the Second Vatican Council, Pope John XII wrote that “we are now on the slopes of the sacred mountain.” He reached the pinnacle by embracing the world like a great-grandfather, making everyone feel part of one family. [page 251] 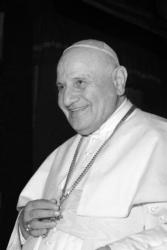 Pope John XXIII, who served as pope from 1958-1963, is seen in this undated photo released by the Vatican in December 2010. (CNS photo/Vatican)

Whoever has a heart full of love always has something to give. –  St. John XXIII

Reading through his diaries one notices his studious imitation of certain saints  to grow in holiness.  One of his favorites is St. Charles Borromeo, the sixteenth-century bishop of Milan and founder of his seminary.  Others include Francis de Sales; John Berchmans; Gregory Babarigo, who reformed the seminary after Borromeo and whom Angelo, when pope, canonized; Philip Neri; Ignatius of Loyola, founder of the Jesuits; and Catherine of Siena. The lessons he learned from them is  that holiness was not dependent on the sensation but on the little things and that “holy detachment” allowed them to be able to hear  God’s voice. All they did, he wrote, was to “cast themselves blindly into all that God wanted them to do…” [Vardey, page 254]

Consult not your fears but your hopes and your dreams. Think not about your frustrations, but about your unfulfilled potential.Concern yourself not with what you tried and failed in, but with what it is still possible for you to do. – St. John XXIII

Beginning in seminary he began to identify, develop and practice a series of disciplines for his interior journey that would allow him to grow in holiness–to perfection.  His daily writings are replete with self-chastisement for not being fully focused during the rosary or for exhibiting too much of self instead of allowing others to express more. He reviewed his successes and failures in his established disciplines daily. Always he reminded himself of all that  Christ provided for him, even when he had forgotten Christ.

As Angelo continued to study, was ordained and accepted the various appointments including serving as an army chaplain, in the Vatican, consecrated bishop, papal nuncio to France, cardinal and patriarch of Venice and ultimately, Pope, he continued to improve and follow those disciplines he developed as a young seminarian. He died on June 3, 1963 and was canonized on April 27, 2014. His feast day is October 11. As we have discovered in reviewing the lives of other saints, this one too, always points us to Christ.

In the hour of farewell, or, better, of leave-taking, I repeat once more that what matters most in this life is: our blessed Jesus Christ, his holy Church, his Gospel, and in the Gospel above all else the Our Father according to the mind and heart of Jesus, and the truth and goodness of his Gospel, goodness which must be meek and kind, hardworking and patient, unconquerable and victorious. – St. John XXIII

Blessed John, Papa John, our good pope, Guide us as we step in your footsteps to become closer to God, to touch the truth of what it is we need to learn in our lives.  To become courageous, surrendered, humble, holy and open to all that will come our way according to the will of God. Pray for our intention, and guide us with your wisdom, your experience and acceptance of everything coming from God in the moment, in the heart of  Christ, in exactly where we are meant to be. Help us with our responsibilities, with the healing of our families, with the necessary spiritual virtues in leadership. In service in ministry, in shepherding, in parenting, in seeing all as one in divine unity,  our planet one family of love. Pray for our protection, for the reign of good and righteousness, for justice to overcome evil, for the light of God’s grace, for the teachings of Christ to live and be practiced, starting with me. [page 285]

In Traveling with the Saints in Italy — Contemporary Pilgrimages on Ancient Paths, Lucinda Vardey further describes the life of this saint and his spiritual discipline in greater detail along with the twelve other Italian saints. She also suggests routes to sacred sites in Italy that may include their homes, places of worship, monasteries, schools or where they served Our Lord so that you may make your own pilgrimage in the steps of these saints.

Traveling with the Saints in Italy — Contemporary Pilgrimages on Ancient Paths, Lucinda Vardey, Castle Quay Books Canada, 2005.  LINK to Amazon to read more about this book and to purchase a copy for your own use.

Journal of a Soul, the Autobiography of Pope John XXIII, First Image Books Edition, published 1980. First published in Italian under the title Giovanni XXIII II Giornale  dell’ Anima. Copyright 1964 Edizioni di Storia e Letteratura. LINK to Amazon to read more about this book and to purchase a copy for your own use. 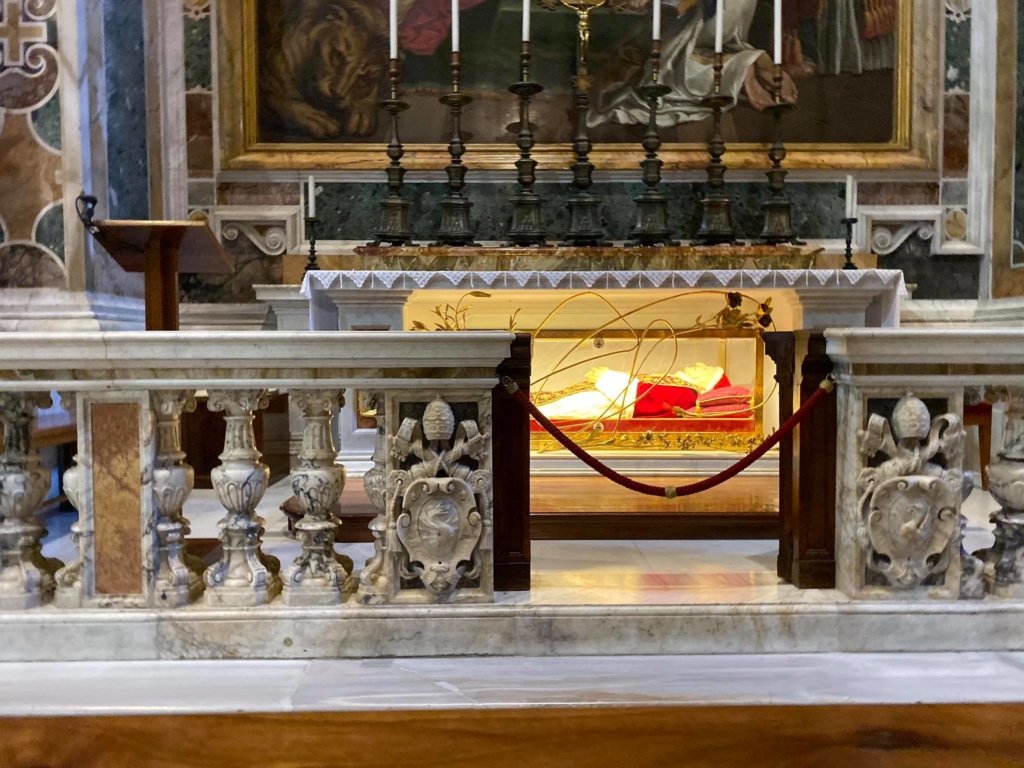 Photo above is of St John XXIII where he lies in St. Peter’s Basilica. During our 25th Anniversary of Inside the Vatican magazine pilgrimage (October 2019) we stopped to venerate this saint while on a private tour led by Archbishop Kabonga.  We visit St. Peter’s  Basilica during all our pilgrimages in Italy.

Our pilgrimages through Italy also include other sites where Pope St John XXIII lived, pilgrimaged, served and worshipped.  Join as we follow in the footsteps of the faithful into the heart of the Church.  Click HERE to view all our upcoming pilgrimages!