Photo above of Church and Monastery built on site of where Our Lady appeared, Lezajsk, Poland

1578, Our Lady Appears in Lezajsk, Poland

1578 Our Lady of Lezajsk, Poland, the story as told on the website Mother-Mary.org:

One day Thomas Michaelek, a simple but pious man, had gone, as was his custom, to make up a bundle of sticks to be used as fuel in a wood near the town, when suddenly he witnessed, on a spot where he went to pray, a marvelously bright splendor and within it the Blessed Mother with our Lord Jesus and St. Joseph.  At the same time he heard a voice that seemed to come from the lips of the Blessed Virgin, and it said to him: “Thomas, I have chosen this place; on it my Son shall be honored, and everyone who shall invoke me here shall experience my intercession. Go to the rulers of the city and tell them that it is my will and command, and also that of my Son, that they build here a church dedicated to me.”

Now Thomas was a very humble man and deemed himself unworthy of a heavenly vision. So, fearing some diabolical illusion, he kept the revelation secret. Only sometime after this, when Our Lady had reminded him twice, he asked the rulers of the city to allow him to set up a cross on the spot where the Blessed Mother had stood.

​Soon the people of the neighborhood began to gather together at the holy place, and the Queen of Heaven, faithful to her promise, heard the prayers of the pious people.

​Afterwards it happened that another dweller in this place, Sebastian Talarczyk, who was tending his cattle near the spot, saw the Blessed Virgin clad in white and surrounded by a great light. He went immediately to the city and informed the ecclesiastical authorities of what he had seen. The parish priest went to the spot, clothed with his priestly garments and with a great procession, and they built there a small wooden church under the invocation of St. Ann.

​Not long afterwards, in the year 1606, the bishop of the diocese, M. Potrokonski, seeing that the small wooden church could not contain the worshipers of the Blessed Virgin, who went to that place, set himself, with the help of the pious king, Sigismund III., to build a magnificent church there with a monastery attached to it; and he brought to that place the Fathers of St. Bernard. 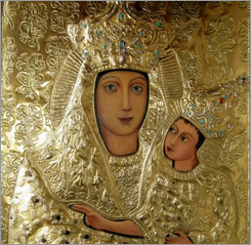 The image of the Blessed Virgin was painted by an artist brought from the city, and as he was very devout to the Immaculate Conception, the work, with the assistance of the Blessed Virgin, was a wonderful achievement. From that time, the people, who were very devout to the Immaculate Virgin, went in crowds to Lazajsk, principally on the day of her feast; and Our Holy Mother rewarded them liberally with her favors, in proof whereof are numerous votive offerings suspended around her image. After a canonical investigation the bishop of the diocese, Henry Firliz, on the 20th of November, confirmed the truth of the miracles formed there.

​When, later on, the renown of the miracles and graces obtained on that spot was ever more and more noised abroad, Pope Benedict XIV., a great servant of Mary, gave leave to crown the miraculous image, thus satisfying the requests of the clergy, the nobility and the pious people. 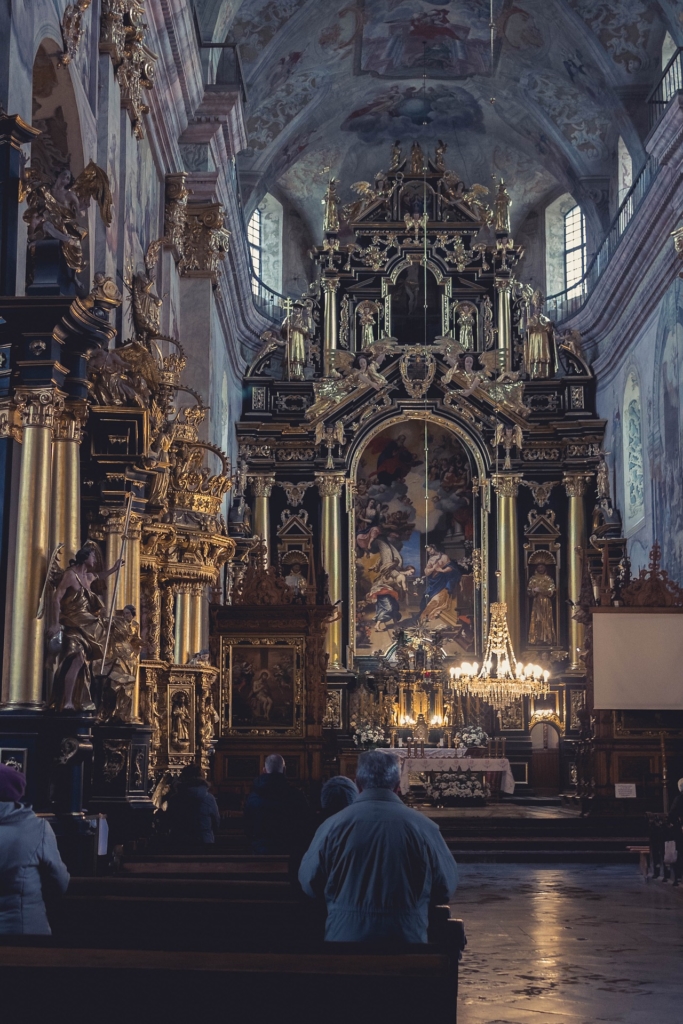 Inside view of the church in Lezajsk, Poland

​All the outlay for increasing the splendor of this solemnity was furnished by Joseph Potocki, the Hetman of the Crown, who also at his own expense purchased two golden crowns for the image. The crowns were blessed by Pope Benedict XIV.  But the pious Hetman did not live to see the coronation. His son, Stanislaus, the Senator, accomplished the work which his father had begun, sparing neither money nor trouble to make this solemnity most splendid and memorable.

​On the 8th of September, 1752, the bishop, W. Sierakowski, in the midst of a large body of clergy and surrounded by the Polish nobility and an innumerable throng of the faithful, performed the solemn ceremony and crowned the image of the Blessed Virgin. [1]

The series of events of this apparition site indicates that it is important to follow exactly the instructions that the Blessed Virgin gives so that all the graces she intends for that site flow fully and without diminution.  While Our Lady heard the prayers of the faithful who came to the site when only a cross was in place, the graces — healings and miracles — increased once the church was built as Our Lady originally instructed.