Our Lady of the Snows

Above, Basilica di Santa Maria Maggiore or Basilica of Saint Mary Major, Rome
Usually, when one talks about devotion to the Mother of Jesus under a particular title, there is a link, either to one of Mary’s qualities (Sorrowful Mother, Mother of Mercy, Seat of Wisdom) or to one of her apparitions (Our Lady of Lourdes, Our Lady of Guadalupe, Our Lady of Fatima.) Devotion to Mary under the title of Our Lady of the Snows is one of the oldest devotions to Mary. It has direct ties to the legend about a snowfall that occurred in Rome in 352 A.D. A wealthy, childless Roman couple with a great devotion to Mary asked what they should do with their property since they had no children to whom to bequeath it.
Mary appeared in a dream to them that she wanted a church built in her honor and that the site for this church would be covered with snow. The next morning the husband approached his friend, then Pope Liberius (352-366), and was amazed to learn that the Virgin Mary had also appeared to Pope Liberius advising him that a miraculous snowfall would occur that would outline where the church was to be built in her honor.  The next day, on August 5, a hot sultry morning, Esquiline Hill was covered with snow and the people rushed to stake off the outline before the snow melted.  A church to honor Mary was built on the hill in 358 A.D. Restored and refurbished many times, this church, now the magnificent Basilica of St. Mary Major, still stands today as the seat of devotion to Our Lady of the Snows in the Catholic Church.

The legend is long celebrated by the release a shower of white rose petals from the basilica’s dome every August 5.  Below is a video of coverage of the celebration from today, August 5, 2019:

The Story of the Dedication of Saint Mary Major Basilica

First raised at the order of Pope Liberius in the mid-fourth century, the Liberian basilica was rebuilt by Pope Sixtus III shortly after the Council of Ephesus affirmed Mary’s title as Mother of God in 431. Rededicated at that time to the Mother of God, St. Mary Major is the largest church in the world honoring God through Mary. Standing atop one of Rome’s seven hills, the Esquiline, it has survived many restorations without losing its character as an early Roman basilica. Its interior retains three naves divided by colonnades in the style of Constantine’s era. Fifth-century mosaics on its walls testify to its antiquity.

The basilica is also home to a few remnants of the humble crib in which Christ was laid at His birth. These pieces of the manger were carried to Rome by Christians fleeing the Muslin conquest of the Holy Land in the 7th century. They are preserved in a silver reliquary resembling an ordinary manger, upon which lies an image of the Infant Jesus.  The Holy Crib is the object of particular devotion and veneration during the liturgical ceremonies of Christmas eve and Midnight Mass. On Christmas morning there is a  procession in honor of the Holy  Crib of the Infant Jesus, which culminates in the exposition of the sacred relic on the high altar. 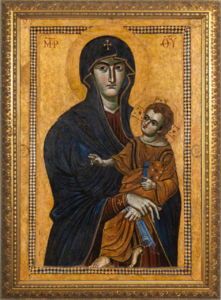 Another venerable treasure is the icon of Our Lady under the invocation of Salus Populi Romani literally translated as “health (or salvation) of the Roman people.” According to tradition, this image of Mary embracing Jesus as a young boy was the work of the evangelist St. Luke, who painted it on a tabletop made by Our Lord himself in St. Joseph’s carpentry shop.  this miraculous icon has been carried in processions around Rome on many occasions. In 593 the newly-elected St  Gregory the Great had the icon carried in public procession through the streets of  Rome praying for an end to the Black Plague.  Pope St. Pius V followed his example in 1571 to pray for victory during the Battle of Lepanto, as did Pope Gregory XVI in 1837 to pray for the end of the cholera epidemic.

Two popes are entombed here: Sixtus V and Saint Pius V. In addition, the relics of Saint Jerome, a Doctor of the  church rest here… although it is uncertain whether they are under the Papal Alter within the main body of the church or within the confessio of the chapel of the right transept.

St. Mary Major is one of only four basilicas that hold the title of “major basilica” and known as patriarchal cathedrals in memory of the first centers of the Church. St. John Lateran represents Rome, the See of Peter; St. Paul Outside the Walls, the See of Alexandria, allegedly the see presided over by Mark; St. Peter’s, the See of Constantinople; and St. Mary’s, the See of Antioch, where Mary is supposed to have spent most of her later life. These four major basilicas along with the Basilica of St. Lawrence-outside-the-Walls were referred to as the “patriarchal basilicas” of Rome and were associate with the five ancient patriarchates.

The title of “major basilica” was introduced in 1300 by Pope Boniface VIII.  With the promulgation of the bull Antiquorum fida relatio, he instituted the Holy Year and set the conditions for its indulgences. Boniface VIII renewed certain “great remissions and indulgences for sins” which were to be obtained “by visiting the city of Rome and the venerable basilica of the Prince of the Apostles.” He offered “not only full and copious, but the most full, pardon of all their sins: to those who fulfilled certain conditions: first, as truly penitent, they had to confess their sins and, second, they had to visit on pilgrimage the basilicas of  St. Peter and Saint Paul, the respective burial sites of the apostles Pope Saint Peter and Saint Paul.

In the second jubilee year in 1350,  Pope Clement VI designated a third major basilica, Saint John in the Lateran, the Cathedral of Rome and encouraged the faithful to make daily visits to it in addition to the basilicas of St. Peter and St. Paul.  Finally, for the next jubilee year in 1390, the Basilica of Saint Mary Major, the oldest church in Rome dedicated to the Blessed Virgin, was added to the list. Visiting these four churches has remained one of the conditions for gaining the Roman Jubilee indulgence.

These four major basilicas are distinguished by their having a holy door — traditionally an entrance portal that are normally sealed by mortar and cement from the inside so that they cannot be opened. They are ceremoniously opened during Jubilee years designated by the Pope, for pilgrims who enter through those doors may piously gain the plenary indulgences attached with the Jubilee year celebrations.

During our pilgrimages that include Rome, we visit all four major basilicas and venerate the Salus Populi Romani while at the Basilica of St. Mary Major.  Click HERE to view our pilgrimages through Italy.  In fact, there are two pilgrimages in Italy scheduled for this October!  Time to register is ending soon! 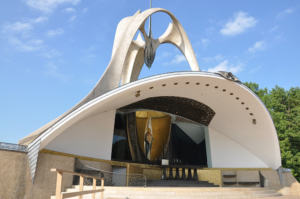 There is also a National Shrine to Our Lady of the Snows located here in the United States, in Belleville, IL near St. Louis.  Be sure to put this on your “must visit” list the next time you are in the area or make a special pilgrimage.

Sources, click on the titles to be take to the pages for more information as to the devotion, the legend or the history of the basilica:

The National Shrine to Our Lady of the Snows