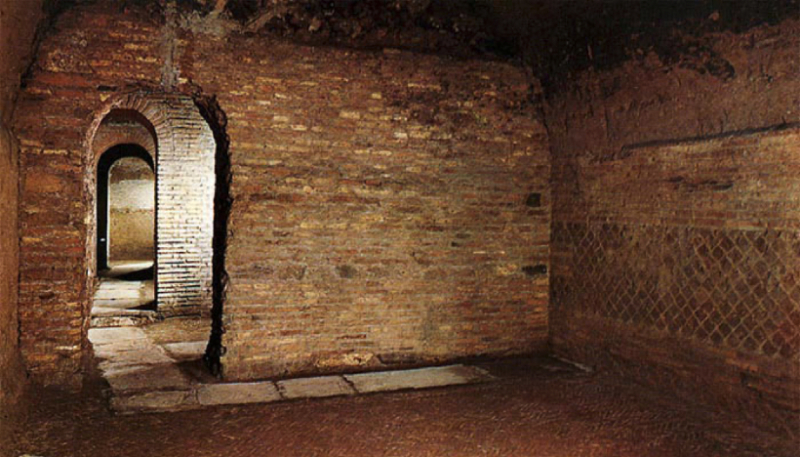 Three Churches in One

S. Clemente is not one church but three, constructed one above the other, resting on the remains of even earlier Roman habitations. in fact, it is an ideal example of how titular churches evolved in early Christianity.

S. Clemente’s complicated journey backwards in time begins at the lowest point of the basilica complex. Two levels below the present church, the visitor enters a musty tufa-walled corridor and peers through an iron grille into a dark tunnel five metres below. The sound of rushing water is constant and disquieting.

When in AD64 a great fire engulfed the narrow streets and crowded apartment buildings between Rome’s Coelian and Oppian Hills, the first stratum of S. Clemente was reduced to smouldering rubble. Through the grille can be seen a section of orange brick wall and piece of brick pavement (discovered during the construction in 1912-14 of a tunnel to drain a lake located under the basilica), identified as the charred remains of houses destroyed by the fire. The ruins of these gutted dwellings were filled in and used as the foundations for a later residential area. It was the new Flavian dynasty, in an attempt to gain the people’s goodwill after Nero’s misdeeds, who acquired the land here and began an ambitious building programme, including the Colosseum, or Flavian Amphitheatre (built in approximately AD70-75), about 300 metres away.

The first corridor leads into a labyrinth of dark and mouldy chambers, tunnels and niches. Thick tufa walls alternate with brick surfaces in diamond patterns (the Roman opus reticulatum), and the floors are composed of herringbone tiles. Here, still two floors below street level, are the foundations of two buildings separated from one another by a narrow passageway: on one side a brick insula or apartment complex, and on the other the ground-floor rooms of a first-century mansion, or perhaps a warehouse, surrounding an open courtyard.

Most historians infer, from both tradition and ancient records, that the large building raised on the ravages of the great fire belonged to the consul-martyr Titus Flavius Clemens. (Some recent scholars claim instead that it was the Roman Mint.) According to the Roman historians Suetonius and Dio Cassius, Clemens was executed by Domitian in AD95, for ‘godliness’ and ‘following Jewish practices’ – obviously Christian worship and disrespect for Roman deities. It was Clemens’ wife, Flavia Domitilla, or her niece of the same name, who started the Catacomb of Domitilla. The open interior courtyard of the Flavian villa (or warehouse) would have been ideal for Christian gatherings. The church built here centuries later was identified as the Titulus Clementis, and later named after Pope St. Clement (88-97) who, according to tradition, had served as a slave in the first-century household.