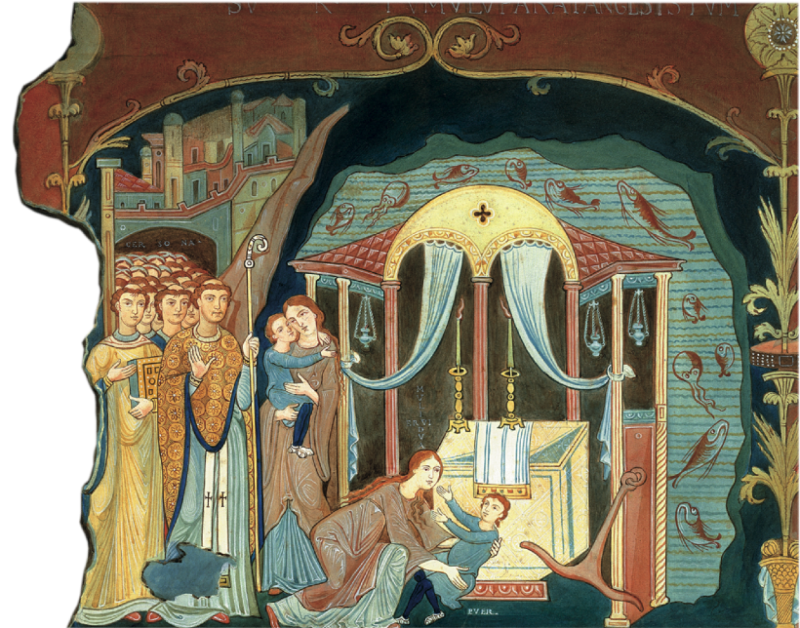 fresco of small child whisked away by the waves

The St. Clement frescoes in the fourth-century basilica have links to the church’s first-century origins. The historical Pope St. Clement, to whom the church is dedicated, was the third successor of St. Peter as Bishop of Rome. According to legend, St. Clement was banished by Trajan (98-117) to the Crimean mines, where he converted so many soldiers and fellow prisoners that the Romans tied an anchor to his neck and threw him into the Black Sea. Rescued by angels and conveyed to an underwater tomb, the saint was revealed to believers once every year by a miraculous ebbing of the tides. A delightful fresco (commissioned by a local family named de Rapiza in the eleventh century) in the narthex of the fourth-century church shows how, on one of these occasions, a small child was whisked away by the waves, to be recovered safe and sound at the next year’s ebbing.

Across from this, another fresco shows the Slavic missionaries, Sts. Cyril (826-69) and Methodius (815-85), who supposedly recovered St. Clement’s body from the Crimean Sea, solemnly escorting the saint’s remains to be interred in Rome in the church of his name. When St. Cyril died in Rome some years later, he was also buried in S. Clemente, where his tomb became a place of pilgrimage for many Slavic Catholics.

Another – humorous – fresco located in the nave of the fourth-century church tells the story of a jealous husband, complaining of his wife’s constant attendance at St. Clement’s Masses, and making a fool of himself by mistaking a ponderous column for the saintly Pope. His surprising expletive (‘Fili dele pute’) is the earliest known writing in the Italian vernacular.

Pope St. Clement was also the author of a famous document which marked a turning point in the life of the Roman Church. In his letter to the Corinthians (AD96), known as ‘First Clement’, he appealed to the Corinthian Church to reinstate a group of deposed presbyters. Speaking in the name of the Roman Church, he insisted on the principles of order, discipline and respect for authority. Clement’s ideas prevailed, resulting by the late second century in a solidly organized Roman Church, with a Pope (Bishop of Rome) in Apostolic succession, a hierarchical clergy and official Church property.