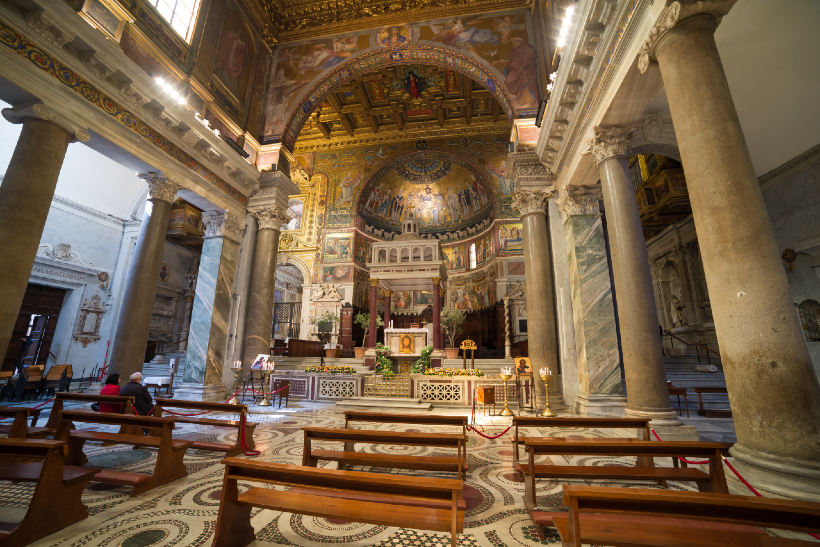 The piazza of S. Maria in Trastevere is always a magical scene. As in imperial days, the square is a gathering place for people form different countries – artists, writers and tourists who read their foreign newspapers in the sunny cafes across form the church. The Trasteverini, who pride themselves on being one of Rome’s earliest and most ‘populare‘ (in the sense of simple and down to earth) neighbourhood communities, meet to gossip after Mass and to watch their children chase balloons around the central fountain. On Sundays, weddings, first communions and local military concerts draw the local residents in bustling crowds to the ancient square.

Above the lively piazza, sparkling thirteenth-century mosaics parade lamp-bearing virgins in jewelled and golden robes across the church’s portal, built by Carlo Fontana in 1702, four Baroque statues of S. Maria’s favoured saints, Calixtus, Cornelius, Pope Julius and Calepodius (their relics are beneath the main altar inside), gesticulate gracefully in flowing robes.

S. Maria in Trastevere is a palimpsest of the spiritual and artistic history the church has experienced over the last 2,000 years. The front doors have stone cornices dating from the imperial age, and the granite pillars of the nave were taken from the Baths of Caracalla. Close inspection of the columns reveals the heads of several pagan female deities peering from their classical capitals.

Under the portal there are sarcophagi from the third and fourth centuries and some architectural decoration from the eighth and ninth centuries, when the church was first restored. The Medici coat-of-arms in a side chapel honours one of Italy’s most powerful Renaissance families, while the Altemps Chapel, built by Maritno Longhi the Elder in 1584-5, commemorates the Council of Trent, which ushered in the Catholic Counter-Reformation. The gilded ceiling dates form the seventeenth century, and the paintings of saints on the nave walls were done in the nineteenth century under Pope Pius IX (1846-78).

The monument’s prevailing character, however, is medieval. The church was almost completely rebuilt by Pope Innocent II (1130-43) around 1140. (He came from Trastevere’s powerful Papareschi family and is buried in the left aisle of the church.) The profound spirituality of the twelfth-century world is evoked by the basilican interior (three aisles divided by twenty-one massive pillars supporting a flat wooden roof), the Romanesque campanile, the handsome mosaic pavement (redone in the nineteenth century), the sombre tomb of Trastevere’s pre-eminent medieval Cardinal, Pietro Stefaneschi (d. 1417) – and, above all, the splendid mosaics over the altar.

It was in the twelfth century that the cult of Mary spread throughout Europe, as churches and cathedrals were built in her honour, and S. Maria’s mosaics have a special place in the history of Marian worship. They are considered the first example of the ‘glorification’ of the Virgin, in which Mary is shown as a youthful and queenly spouse – rather than as a Madonna with Child – enthroned and on an equal footing with Christ the King. On Mary’s right are St. Calixtus, St. Lawrence, and Pope Innocent II, holding a model of his church; to Christ’s left are St. Peter, St. Cornelius, Pope Julius I, and St. Calepodius. Around the apse the thirteenth-century master Pietro Cavallini added another series of famous mosaics (c. 1290) on the life of the Virgin. Over the main nave, in the centre of the coffered ceiling, is Domenichino’s Assumption of the Virgin, painted in 1617.

A SENSE OF COMMUNITY

The sense of community which must have characterized St. Calixtus’ early Christian congregation is still evident in the parish of S. Maria in Trastevere today. The neighbourhood is one of the few in Rome to celebrate its own festival. During the Festa di Noiantri (meaning ‘we others’), a large doll-like statue of the Madonna, dressed in a new gown every year, is paraded through quarter’s crowded streets. When the church’s precious sixth- (or seventh-, no one is quite sure) century icon of the Madonna came ‘home’ in May 1993, after many years of restoration, the entire piazza was covered by a floral decoration representing the image. The painting was paraded with appropriate pomp and fanfare and displayed on a warm spring night in front of the illuminated basilica, before returning to its own chapel to the left of the main altar.

As in the days of early Christianity, the Trastevere parish is devoted to service to the city’s poor. It is said that Rome’s female patron saint, Frances of Rome (1384-1440), came to the basilica to pray for strength to assist the needy. Now the Community of Sant’ Egidio, with its headquarters around the corner from the basilica’s back door, is well known for its charitable activities among the city’s hungry and homeless. The community runs a soup kitchen, feeding about 1,600 a day, and a centre for abandoned children – as well as a weekly communal prayer and Scripture reading service – where Rome’s first Christian congregation would have felt quite at home.