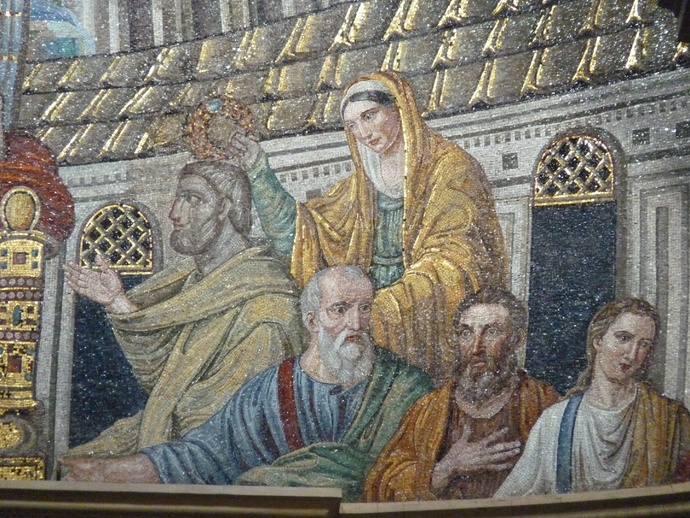 St. Prassede was substantially renovated by its titular Cardinals St. Charles Borromeo (1564–84) and Ludovico Pico della Mirandola (1728–31) and contains many treasures from different periods, among these a very early sculpture by Gianlorenzo Bernini (1598–1680), a funerary bust of G. B. Santoni, executed in 1615 when the artist was only seventeen, and another moving funerary monument by Arnolfo di Cambio (1245–1303) for Cardinal Anchier de Troyes, a titular Cardinal of St. Prassede assassinated inside the church in 1286 during a popular uprising.

A stone tablet on one of the right-nave piers commemorates the remains of about 2,300 martyrs which Pope Paschal I had brought form catacombs outside Rome. The relics now repose in the crypt, in four sculpted sarcophagi. (The sarcophagus on the lower right contains the bodies of Sts. Pudenziana and Prassede.) In a niche to the back of the chapel of Zeno is displayed a marble column, to which, according to tradition, Christ was tied for scourging. The column was brought to Rome in 1223 by Giovanni Colonna, Papal legate to Constantinople and titular Cardinal of the church.

The nave frescoes depicting angels and scenes from Christ’s Passion were made between 1594 and 1600 by artists from the Roman Mannerist school: Paris Nogari, Baldassare Croce and Giovanni Balducci. More frescoes, by Cavalier d’Arpino, decorate the middle left-nave chapel, and in the chapel to the left of the presbytery is a Scourging of Christ attributed to Giulio Romano.