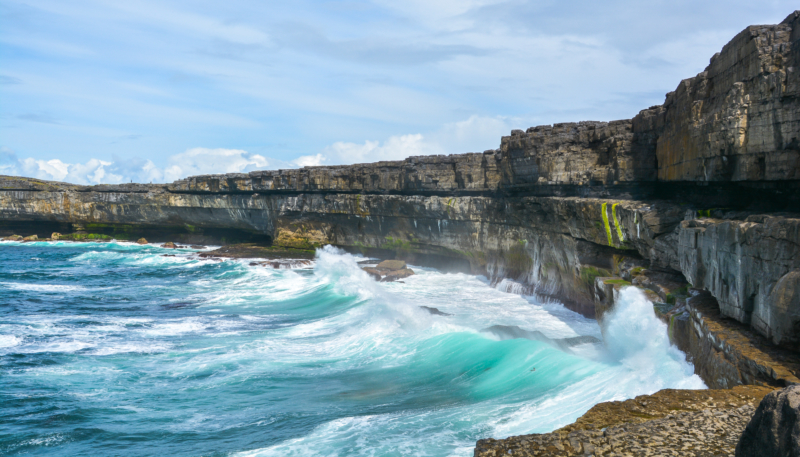 Of all the Irish saints, St. Patrick is the most famous.  His early life was filled with difficulty and hardship as is illustrated by the quote below.

The Ireland of Patrick’s fifth century was rural with an agricultural society based on pasture and tillage… There were no cities or towns.  Forests and bogs were extensive.  Lakes and rivers overflowed.  Although the population was of mixed races from different invasions over centuries, the Irish language of the Celtic people had replaced the others.  Society was stratified.  Government was aristocratic.  Order devolved on individual aristocrats… Irish raiders took advantage of the crumbling Roman Empire to mount attacks on Britain and Gaul and bring slaves to Ireland.  On one such raid, probably in western Britain, Patrick was taken captive at the age of sixteen. (Armagh, 9).

After he converted to Christianity and escaped captivity, Patrick became a bishop and was sent back to Ireland as a missionary.

Later, Patrick returned to Ireland as a missionary bishop…  Ireland, however, had already come under the influence of the Roman Empire.  Sailors, visitors, slaves, traders and the little Irish colonies in Britain ensured some knowledge of Roman civilization.  Christians inevitably were among the newcomers to Ireland even before the end of the fourth century…  St. Patrick concentrated his mission in north Connacht and Ulster…  It was a mission fraught with difficulty, hardly officially recognized, embittered by accusations, apparently from British church authorities, that he was an unworthy bishop because of a sin of his youth and allegations of profiting.  Patrick’s reply to these accusations is a simple spiritual one.  He received his mission from God….  It would have been the aim of the Romanized Briton Patrick to follow in the footsteps of the bishops who had come before him, to establish episcopal rule, to found his own Christian community and give to the ‘barbarian’ Irish society the moral, spiritual and aesthetic values of Christianity. (Armagh, 9-10).

Patrick himself in his Confession gave thanks for the success of his mission: ‘How then does it happen that in Ireland a people who in their ignorance of God always worshipped false gods and unclean things in the past, have now become a people of the Lord and are called children of God?  How is it that the sons and daughters of Irish chieftains are seen to be monks and virgins dedicated to Christ?’ (Armagh, 12).

Join us on pilgrimage to Ireland this summer! Learn more here!