“Have caution in not allowing yourself to be struck down by adversity nor becoming vain by prosperity.” – St. Clare

Born on July 16, 1194, to Favorino Sciffi, Count of Sasso-Rosso and his wife Ortolana.  Traditional accounts say that Clare’s father was a wealthy representative of an ancient Roman family, who owned a large palace in Assisi and a castle on the slope of Mount Subiaso.  As a young girl, Clare dedicated herself to prayer. At 18 years of age, she heard St. Francis of Assisi preach during a Lenten service in the church of San Giorgio and asked him to help her live according to the Gospel. On Palm Sunday in 1212, Clare left her father’s home and went to the chapel of the Porziuncula to meet with Francis. While there, Clare’s hair was cut off and she was given a plain robe and veil in exchange for her rich gown.

Clare joined the convent of the Benedictine nuns of San Paulo, near Bastia, under Francis’ orders. When her father found her and attempted to force her back into his home, she refused and professed that she would have no other husband than Jesus Christ. In order to give her the greater solitude she desired, Francis sent Clare to Sant’ Angelo in Panzo, another Benedictine nuns monastery. Her younger sister Catarina (later took the name of Agnes) joined her. Other women joined them, and they became known as the “Poor Ladies of San Damiano”. They lived a simple life of poverty, austerity and seclusion from the world, according to a Rule which Francis gave them as a Second Order.

San Damiano became the centre of Clare’s new religious order. San Damiano was long thought to be the first house of this order, however, recent scholarship strongly suggests that San Damiano actually joined an existing network of women’s religious houses organized by Hugolino (who later became Pope Gregory IX). Hugolino wanted San Damiano as part of the order he founded because of the prestige of Clare’s monastery. San Damiano emerged as the most important house in the order, and Clare became its undisputed leader. By 1263, just ten years after Clare’s death, the order had become known as the Order of St. Clare.

In 1228, when Gregory IX offered Clare a dispensation from the vow of strict poverty, she replied: “I need to be absolved from my sins, but not from the obligation of following Christ.” Accordingly, the Pope granted them the Privilegium Pauperitatis — that nobody could oblige them to accept any possession.  Clare fought attempts by prelates to impose the Rule of St. Benedict on her order.  She preferred the stricter rule of St. Francis and sought to imitate Francis’ virtues and way of life so much so that she was sometimes titled alter Franciscus, another Francis.

Unlike the Franciscan friars, whose members moved around the country to preach, Saint Clare’s sisters lived in enclosure, since an itinerant life was hardly conceivable at the time for women. Their life consisted of manual labour and prayer. The nuns went barefoot, slept on the ground, ate no meat and observed almost complete silence.

It is recorded that separately in September 1240 and June 1241, a pair of armies attacked the monastery of San Damiano and the town of Assisi. Both targets were successfully defended as Clare prayed to Christ, present in the Blessed Sacrament. In one instance, she walked out to the yard with the Blessed Sacrament in her hands, placing it on the wall in sight of the armies. The attacking armies were suddenly frightened and fled the area.

Two days prior to her death, the Pope confirmed that Clare’s rule would serve as the governing rule for her Order. Her remains were interred at the chapel of San Giorgio while a church to hold her remains was constructed. At her funeral, Pope Innocent IV insisted the friars perform the Office for the Virgin Saints as opposed to the Office for the Dead. This move by Pope Innocent ensured that the canonization process for Clare would begin shortly after her funeral. Pope Innocent was cautioned by multiple advisors against having the Office for the Virgin Saints performed at Clare’s funeral. The most vocal of these advisors was Cardinal Raynaldus who would later become Pope Alexander IV, who in two years time would canonize Clare. At Pope Innocent’s request the canonization process for Clare began immediately. While the whole process took two years, the examination of Clare’s miracles took just six days. On 26 September 1255, Pope Alexander IV canonized Clare as Saint Clare of Assisi. 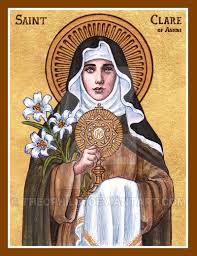 Some 600 years later in 1872, Saint Clare’s relics were transferred to a newly constructed shrine in the crypt of the Basilica of Saint Clare, where her relics can still be venerated today.

St. Clare was designated as the patron saint of television in 1958 by Pope Pius XII, because when St. Clare was very ill, she could not attend mass and was reportedly able to see and hear it on the wall in her room. Her feast day is August 11. She is also the patroness of eye disease, goldsmiths, and laundry.

Clare is often pictured carrying a monstrance or pyx, to commemorate the time she warded off the soldiers at the gates of her convent with the Blessed Sacrament.

Click on the following to view the specific details of the pilgrimages mentioned above:

Classic: The Greatest Holy Presences, Celebrating 25 Years of Inside the Vatican Magazine, October 4 – 12, 2019

Classic: Women Saints Through the Centuries with Barbara Heil, October 14 – 21, 2019