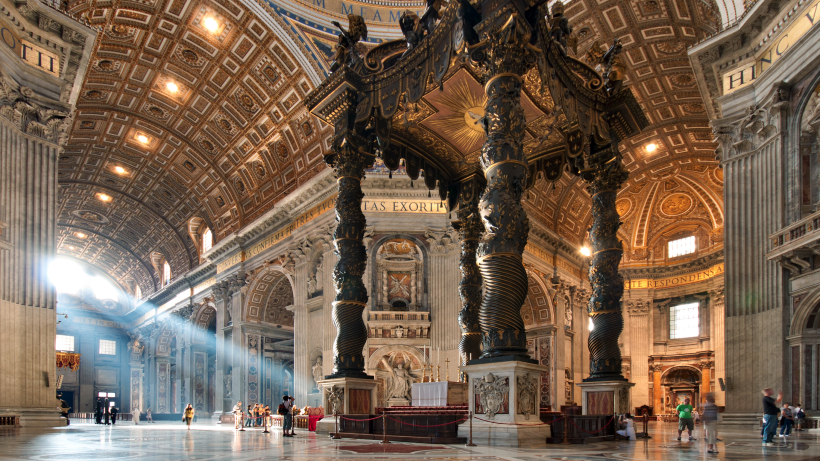 the Baldacchino in St. Peter’s Basilica

The Baldacchino is a work of art made in the Baroque period by Bernini.  Baroque art is an art of action.  The action emphasized in the Baldacchino is the descent of the Holy Spirit.  Bernini shows us the descent in the three symbols of the Holy Spirit: the dove in the center of the ceiling, fire in the gold which surrounds the dove, and wind seen in the tassels flowing outward.

The appearance of the Holy Spirit’s descent can also be seen in the twisting pillars.  These strange looking columns are Greek or Eastern style columns.  Bernini chose these forms for two reasons.  First, to remind us of the Old St. Peter’s Basilica, which was built by Emperor Constantine.  Second, to give the giant bronze construction the appearance of being lighter than it is.  These pillars add to the action of the descent by giving it that lighter-than-air feeling, as if it is just floating there while the Holy Spirit comes down to us.

Another instance of note concerning the baldacchino is its purpose and the direction it faces.  Notice, in the photo above, that the baldacchino stands over the main altar in St. Peter’s Basilica.  The purpose of the bronze structure is to draw attention to the main altar, which is, by tradition, supposed to face eastward toward the rising Son.  St. Peter’s main altar does face towards the orient, but it does even more than that.  It faces towards us as well.  The Basilica is positioned in such a way that the main gate faces east.  Thus, when the Pope offers mass towards the rising Son, he also offers it towards those entering the church.