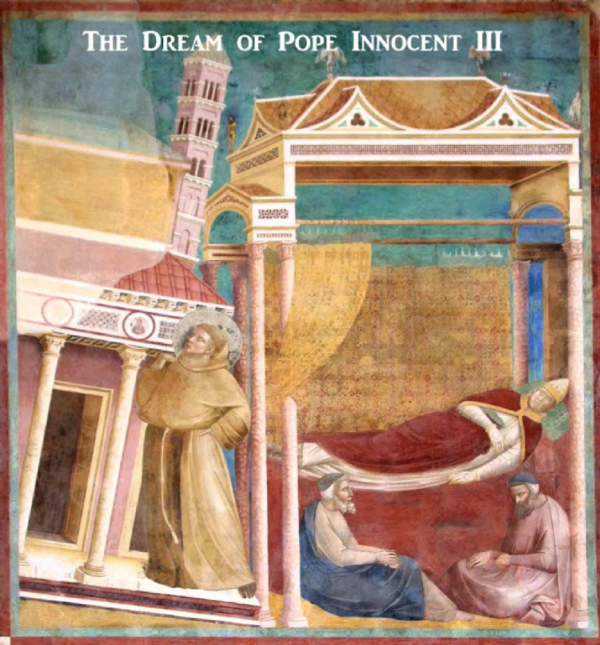 Beneath the triumphal arch in the middle of the transept stands the Gothic Papal altar, which contains a wooden altar where the earliest Popes, from St. Peter to St. Sylvester, supposedly celebrated the Mass, and silver busts with alleged relics from the heads of St. Peter and St. Paul. The tabernacle, known to be the last Gothic work executed in Rome, was designed by Giovanni di Stefano in 1367, and surmounted by bright frescoes painted by Barna da Siena in 1369. The confessio below contains the tomb of Pope Martin V (1417–31), responsible for many of the basilica’s most important embellishments.

Entering the transept, we pass from the Middle Ages to the height of late sixteenth-century Mannerism. Pope Clement VIII (1592–1605) employed his favourite architect, Giacomo della Porta (1539–1602), and painter, Cavalier d’Arpino (1568–1640); (see his famous Ascension in the right transept altar) to direct the works. Top Mannerist painters of the day (Cesare Nebbia, Paris Nogari, Cristoforo Roncalli, agostino Ciampelli, etc.) executed a series of frescoes around the entire left and right transepts, which tell the story of Constantine and St. John Lateran.

To the left of the apse is the nineteenth-century tomb of Pope Innocent III (1198–1216), moved here from Perugia in 1891. It is fitting that Innocent’s remains lie in St. John Lateran for it was here that the powerful Pope approved the Franciscan Order, after a frightening dream in which he saw St. Francis holding upon his shoulders a collapsing Lateran basilica.

No visitor should miss the lovely cloister (1215–30), reached from a door off the left transept. This was designed by Pietro Vassalletto and his son, who also worked on the cloister in St. Paul Outside the Walls. The abundant mosaics, delicate arches with paired spiral and smooth columns, and oddly ‘primitive’ animal and floral motifs are. typical of the Vassalletto duo.

This is one of Rome’s most peaceful and evocative spots. Bypassed by the tourist crowds, aired by soft breezes and the scent of flowers, the Vassalletto corridors also offer the pilgrim a wealth of unexpected surprises. Displayed along and upon the ancient brick walls are fragments from the original basilica, carved sarcophagi, a thirteenth-century Papal throne, and touching inscriptions from the earliest Christian burial sites.

The Baptistry, around the back and right of the basilica, was originally built by Constantine, transformed into an octagonal brick building by Pope Sixtus III (432–40), and substantially restored by Pope Urban VIII (1623–44). This structure breathes the spirit of a different age, and should enjoyed at length.

The bronze doors in the right-hand chapel have been praised by Dante and others down through the ages because of the wonderful ‘singing’ sound they make when they open and close. The left-hand chapel dates from the fifth century and has rich fifth-century mosaics on the vault. The shrine was built by Pope Hilarius (461–8) in fulfillment of a vow to St. John the Evangelist, in whose tomb the then Papal legate had hidden during a dangerous riot in Ephesus.

The original narthex and entrance form another chapel (opposite the entrance), and here can be sensed the atmosphere of Constantine’s days. To the left another chapel has seventh-century mosaics – very rare for Rome and partially obscured by a Baroque altar.

We will be going to visit the Basilica of St. John Lateran in our upcoming Journey Toward the Face of Christ pilgrimage this coming May/June 2022.