The Catacombs of St. Calixtus part 3 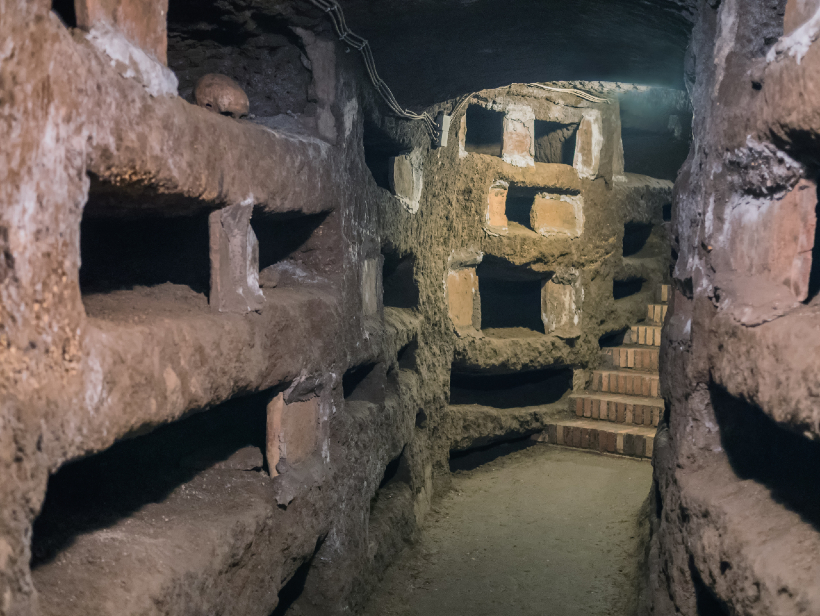 THE SHRINE OF ST. CECILIA

Next to the Crypt of the Popes is the shrine of St. Cecilia, one of the most popular early women martyrs.  In brief, St. Cecilia was of the patrician Cecili family, upon whose estates the Calixtus Complex was excavated, and was first buried in these catacombs and then moved to her former Trastevere house.  The most wondrous aspect of St. Cecilia’s history is that when her grave was opened during St. Clement VIII’s pontificate (1592-1605), her body was found to be perfectly intact.  The artist Stefano Maderno was there, and immediately made a beautiful marble statue.  A copy (the original is in the Trastevere church), funded by the twentieth-century American, Edith Cecilia McBride, now lies in the Calixtian Crypt.  The shrine is also decorated with some interesting eight- to ninth-century frescoes: a wide-eyed Christ with a huge Bible, and the famous orante, a female figure with outstretched arms, representing, according to Church historians, the beatific soul after death.

THE CHAMBERS OF THE SACRAMENTS

Here and there along the corridors are small chambers with several floor tombs, vault ceilings and delicate fresco decorations.  These were family mausoleums, called ‘crypts of the sacraments’.  The third-century paintings convey a light and almost happy spirit, expressing a serene confidence that the families reunited here in death will enjoy peace together in heaven.

The scenes in these chambers often represent early Christianity’s two main sacraments – Baptism and the Eucharist – or scenes from the Old and New Testaments.  Everything is symbolic here: Holy Communion is prefigured by Christ’s multiplication of the loaves; Jonah and the whale symbolize death and resurrection.

In these catacombs we find many secret Christian signs, known only to the faithful: the anchor as hope; a palm branch for martyrdom; fruit and flower baskets for paradise; a peacock for immortality; a ship as the Church.  The most ubiquitous catacomb image is that of the Good Shepherd.  Christ is referred to by a monogram composed of the first two letters of the Greek spelling for Jesus Christ, or by a fish.  Nowhere is he shown on the Cross.

The symbols used by the early Christian Church in Rome have an almost naive candour which appeals even today.  Carved into the walls of underground cemeteries and gathering places in Christian homes, these signs are emblematic.  The faithful were keeping a low profile in the age of persecutions, and the simple pictures refer only indirectly to Jesus and to Christian tenets of faith.  The sign of the cross was not widely used until the sixth century.  For identification, Christians often used the fish symbol, the explanation being that the first letters of the Greek words for ‘Jesus Christ, Son of God, the Saviour,’ formed the Greek word fish (ichthys).  Symbols from nature such as the dove, the vine and grapes, sheep and shepherds suggest to us today the serene and almost ‘happy’ attitude with which believers regarded their life on earth and in the world to come.