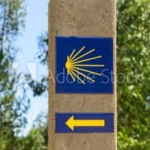 One activity that we encourage you to do is to read accounts of pilgrimages for insight and inspiration.  One of the books on our list of recommended reads is by Fr. Dave Pivonka, T.O.R., entitled, Hiking the Camino, 500 Miles With Jesus. In this book, he details the physical reality of walking every day for thirty-one days, life along the El Camino, encounters with other pilgrims—the lessons learned from his time with them—and reflections from his own contemplation and prayers as he walks every day with Christ.  He chose to walk the El Camino de Compestela (Spain) during the tenth year anniversary of his ordination as a priest in celebration and to deepen his relationship with Christ. (Photo, left is of an El Camino path marker)

We chose this as our first book to review because last week Father Pivonka was elected as the new President of Franciscan University of Stuebenville.   Congratulations to a fellow pilgrim and may his work continue to be blessed!  This LINK to the university site details his qualifications and experience that led to his selection as president.

He mentions early in the book that part of his preparation for the El Camino was reading about saints that may have walked this pilgrim path and to our delight, he mentioned a favorite of ours, St. Francis of Assisi. While biographical accounts vary on whether  St. Francis actually visited Santiago, he did walk frequently  between Rome and Assisi and today there exists a pilgrim path known as “The Way of St. Francis” (or Via Francigena di San Francesco and Cammino di Francesco in Italian) that covers 529 kilometers from La Verna through Assisi to Rieta in Umbria.  Many pilgrims make this self-guided journey every year. We include visits to Assisi in several of our Italy pilgrimages to encounter both St. Francis and St. Clare.  LINK to our Italy pilgrimages.

Fr. Pivonka opens his heart and shares deep revelations and reflections from his pilgrimage. Here are some excerpts from his book that highlight several of them:

First, a reflection on beginning a pilgrimage and trusting he had done enough to prepare (are you ever truly prepared?)

There are moments in life when we simply have to start walking. We often don’t know exactly where we are going or how we are going to get there, but we know that if we are going to move on, if we are going to arrive at our destination, we must begin to walk.  And so I was ready to begin, having little idea what lay ahead but trusting that God would lead me.

The first lesson learned came in relation to the weight of his pack. He was so concerned with it until he finally realized that maybe that is where he needed to begin.

Lord, perhaps this is where we begin. Not with my pack but with my heart, my very life. What is it that you want me to get rid of? How do you want to strip me? How do you want to empty me? What excess luggage am I carrying in my soul?… as St. Paul reminds me, it is not about me but Christ who lives in me (see Galatians 2:20).. I could sense that in fact I was carrying things that he might be inviting me to leave behind. I prayed for the grace to say yes.

Another lesson with packs.  Another pilgrim’s pack seemed so much smaller than his and he thought it would be so much easier to complete the pilgrimage if he such a small pack. Then, out of curiosity, he picked up that pilgrim’s pack.  It was so much heavier than his. Why and how? He never found out, however, upon reflection he saw how each pilgrim’s pack represented the cross that each person has to carry.

When I embrace my cross, I find Jesus.  Our God knows what it is to suffer. The one who accepted the weight of humanity’s cross on his back so that my cross would not break me, he really does know; he does understand. My cross has been chosen out of love for me, and I continually pray for the grace to accept it in the love with which it was given, I pray that carrying my cross will lead me to Jesus and his deep love for me. Amazing, isn’t it? All of this from Pablo’s little backpack.

Also, a lesson in observing the way men and women wash clothes at the end of each day.  The pilgrims would gather at a wash basin and take turns washing the clothes that had been worn that day so that  they would be ready for the next day (usually each pilgrim only brings two sets of clothes). He noted that women really worked at cleaning their clothes while the men, included himself, didn’t really wash their clothes, they just did a quick rinse so that they didn’t “stink” so much.

I realized that a lot of the time when I repent for my sin and go to confession, it is not because I truly want to be clean; rather it is because I don’t want to “stink”anymore. I don’t want to feel guilty or feel bad.  Sadly, I fear, I have often used confession as a “quick rinse cycle”…I hope that I never use the confessional as a “quick wash” cycle, without remembering what Jesus did that allowed me to be forgiven. I want to approach the sacrament with a radical awareness that confession is a result of Jesus’ death. I pray that, when I go to confession, I am motivated to be pure and clean, the same way some of my fellow pilgrims were motivated to actually wash their clothes.

There are other lessons to be found in his book as well.  However, it is the final lesson that drives home the point of what a pilgrimage can do in drawing you closer to Christ.

For the last few days of the Camino, I felt a yearning in my heart that I could not explain. It was a tugging deep within me that was always present but vaguely outside of me…. As I drew closer to Santiago, it became clearer to me what was happening… It was both a longing for and a being called to. While I was experiencing Christ as I walked, I was increasingly being consumed by the reality that he was waiting for me in Santiago.

He arrives in Santiago, finds a eucharistic adoration chapel and kneels in front of the Blessed Sacrament.

I felt as if my chest had been torn open, and light—rich, living, healing light—flooded my very being. The One who is wholly eternal consumed the place where I too am eternal, my soul. At that moment there was a union or communion that was as real as any other personal encounter that I have ever experienced…  I was in awe. There were no more words, no more prayers of petition, no more questions, no more wonderings about what was to come—only presence, only love.

He ends his reflections noting that since walking the Camino and seeing Christ so clearly there, he still sees Him, in places where he did not recognize Him before and he now experiences Him in ways that he had missed in the past.

I have come to understand more fully that all of life reveals Jesus… It is not He who changed but rather I.

Yes, transformation… our hope is that the pilgrimage experience will bring about a “metanoia” — the Greek word for a “change of heart,” a stirring of the spirit created by the rich experiences of our journey. And then, we hope, we may bring this greater understanding and this new spirit back with us, into our own life’s journey.