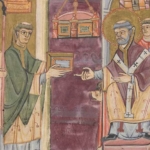 Today is the feast day of St. Augustine of Canterbury!   This saint lived in the sixth century and died on May 26, 604. He was a Benedictine monk commissioned by Pope Gregory the Great to lead a mission (known as the Gregorian Mission) to travel to Britain to christianize KingÆthelberht and his Kingdom of Kent.  The king was married to a  Christian princess, Bertha, daughter of the Charibert I, the King of France.  Augustine was successful in his mission and converted many of the king’s subjects.  He was appointed the first Archbishop of Canterbury and became known as the “Apostle to the English” and a founder of the English Church. (Photo left is a medieval drawing of St. Augustine and Pope Gregory the Great.)

Augustine also established a monastery, St Augustine’s Abbey, on land donated by KingÆthelberht. This foundation has often been claimed as the first Benedictine abbey outside of Italy although there is no evidence that the Rule of St. Benedict was being followed at the time of its foundation. It is also believed that he founded a school (many believe it is 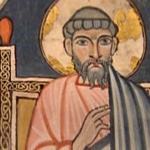 the King’s School in Canterbury making it the oldest existing school) from which teachers were sent to support the mission. He also played a pivotal role in the appointment of the Bishops of London and of Rochester and also worked to unite the scattered Christians throughout the kingdom.

Although at the time of his death, the mission barely extended beyond Kent, his undertaking introduced a more active missionary style into the British Isles. Despite the earlier presence of Christians in Ireland and Wales, no efforts had been made to try to convert the Saxon invaders. Augustine was sent to convert the descendants of those invaders, and eventually became the decisive influence in Christianity in the British Isles. Much of his success came about because of Augustine’s close relationship with King Æthelberht, which gave the archbishop time to establish himself. (Photo above right, early depiction of St. Augustine)

In 2020, we pilgrimage to England celebrating with the English Catholics as they re-dedicate England as the Dowry of Mary.  On our second day in England we travel to Ramsgate where Augustine landed to begin his mission. Here we will visit the Shrine of St. Augustine and attend Sunday Mass in the Extraordinary Form.

We will also tour Canterbury Cathedral, originally founded in 597 by St. Augustine. It is one of the oldest Christian churches in England. Canterbury has been an important spiritual center since the time of St. Augustine; however, it became a major pilgrimage destination after the martyrdom of St. Thomas À Becket in 1170. This is perhaps most famously 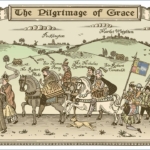 demonstrated in Geoffrey Chaucer’s The Canterbury Tales, which revolves around a group of pilgrims journeying to see the holy relics of this great saint in the Canterbury Cathedral. The cathedral continues to play a central role in English Christianity as it functions as the cathedral of the Archbishop of Canterbury, the leader of the Church of England. (Photo left is a depiction of the pilgrimage described in The Canterbury Tales)

Journey with us to this historic pilgrimage destination and the role it plays in the re-dedication of England as the Dowry of Mary.  Follow this LINK for more details.

St Augustine of Canterbury, pray for us!