“To live is to change, and to be perfect is to have changed often.”

The quote is by Blessed John Henry Newman, the 19th-century’s most important English-speaking theologian, a man who spent half his life as an Anglican and the second half as a Roman Catholic.  He was a priest, popular preacher, writer and eminent theologian in both Churches.  On February 19, 2019, Pope Francis authorized the Congregation for the Causes of Saints to issue a decree attributing a miracle to the intercession of the Blessed Cardinal John Henry Newman. He is expected to be canonized a saint later this year.  Newman was a man that experienced a “metanoia”, he changed and changed often.

Born in London, England on February 21, 1801, he studied at Oxford’s Trinity College, was a tutor at Oriel College, and for 17 years was vicar of the university church, St. Mary the Virgin.  After 1833, Newman was a prominent member of the Oxford Movement, which emphasized the Church’s debt to the Church Fathers and challenged any tendency to consider truth as completely subjective. During our “In the Footsteps of St. Thomas More and Bl. John Henry Newman” pilgrimage, we spend time in Oxford to visit the International Centre of Newman Friends and sites where Newman lived, prayed and studied prior to his conversion. (Photo, below left of the International Centre of Newman Friends) 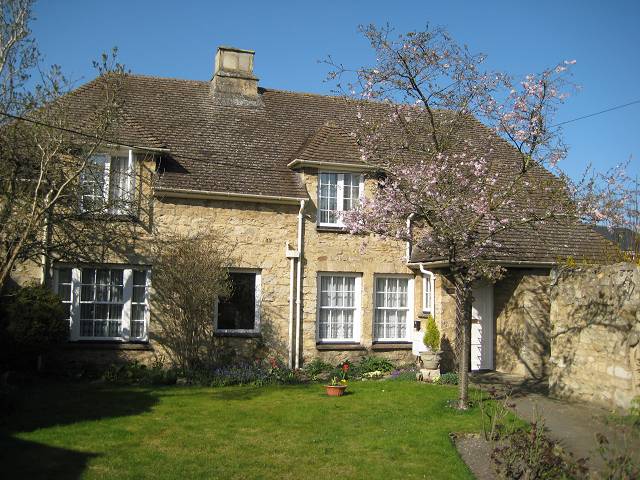 Two years later he was ordained a Catholic priest in Rome and joined the Congregation of the Oratory, founded three centuries earlier by Saint Philip Neri. Returning to England, Newman founded Oratory houses in Birmingham and London and for seven years served as rector of the Catholic University of Ireland.  We will tour the Birmingham Oratory found by and home to Newman for most of his later life except for four years spent in Ireland.  His private papers are also housed here.

Before Newman, Catholic theology tended to ignore history, preferring instead to draw deductions from first principles—much as plane geometry does. After Newman, the lived experience of believers was recognized as a key part of theological reflection.

Newman eventually wrote 40 books and 21,000 letters that survive. Most famous are his book-length Essay on the Development of Christian Doctrine, On Consulting the Faithful in Matters of Doctrine, Apologia Pro Vita Sua—his spiritual autobiography up to 1864—and Essay on the Grammar of Assent. He accepted Vatican I’s teaching on papal infallibility while noting its limits, which many people who favored that definition were reluctant to do.

When Newman was named a cardinal in 1879, he took as his motto “Cor ad cor loquitur”—“Heart speaks to heart.” He was buried in Rednal 11 years later. After his grave was exhumed in 2008, a new tomb was prepared at the Oratory church in Birmingham. (Photo, below left of inside of Birmingham Oratory) 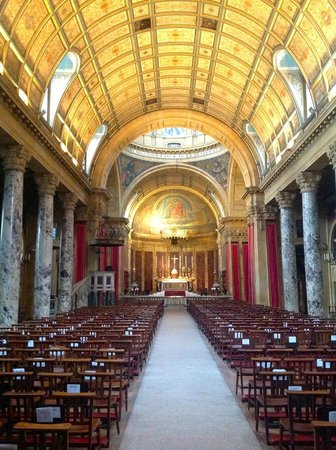 John Henry Newman has been called the “absent Father of Vatican II” because his writings on conscience, religious liberty, Scripture, the vocation of lay people, the relation of Church and State, and other topics were extremely influential in the shaping of the Council’s documents. Although Newman was not always understood or appreciated, he steadfastly preached the Good News by word and example.

His legacy continues… three years after Newman died, a Newman Club for Catholic students began at the University of Pennsylvania in Philadelphia. In time, his name was linked to ministry centers at many public and private colleges and universities in the United States.   In 1993 the Cardinal Newman Society was established with Blessed John Henry Cardinal Newman as its patron to promote and defend faithful Catholic education.  Newman was a lifelong advocate for education that teaches students to reason and discover truth. He came to realize that a genuine commitment to truth, including the Truth that is revealed by God, requires a strong Catholic foundation and adherence to the teachings of the Church.  to promote and defend faithful Catholic education. The Society seeks to fulfill its mission in numerous ways, including supporting education that is faithful to the teaching and tradition of the Catholic Church; producing and disseminating research and publications on developments and best practices in Catholic education; and keeping Catholic leaders and families informed.

For more information about the pilgrimage, click this LINK to “In the Footsteps of St Thomas More and Bl. John Henry Newman”