The canonization date has been set! 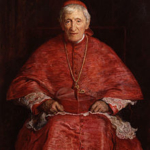 [The featured photo above is of Cardinal Newman in Rome]

Two weeks ago was the feast day of Bl. John Henry Cardinal Newman and we dedicated a blog post telling part of this man’s story and his importance in the Catholic history of England and of the Universal Church.  Recently, it was announced that October 13, 2019 has been set as the date for his canonization along with four other Blesseds:  Indian Blessed Mariam Thresia Chiramel Mankidiyan, founder of the Congregation of the Sisters of the Holy Family; Italian Blessed Josephine Vannini, foundress of the Daughters of St. Camillus; Brazilian Blessed Irmã Dulce Pontes of the Congregation of the Missionary Sisters of the Immaculate Conception of the Mother of God; and Swiss Blessed Marguerite Bays, virgin and Third Order Franciscan.
As reported by the National Catholic Register, the date for canonization may have been selected for the following reasons:

The Indian bishops will be in Rome for their ad limina visit during that time, and so the canonization of Blessed Mariam Thresia Chiramel Mankidiyan would coincide well with their visit.

It also falls during the Oct. 6-27 Pan-Amazonian Synod when many bishops will be in Rome.

Another reason the date of the canonization is timely is this coming November marks the 10th anniversary of Pope Benedict XVI’s Apostolic Constitution Anglicanorum coetibus which provided personal ordinariates for Anglicans entering into full communion with the Catholic Church. Blessed John Henry Newman was a convert from Anglicanism.

To coincide with the anniversary, the Congregation for the Doctrine of the Faith is holding a symposium on Oct. 15 at the Pontifical Gregorian University in Rome where ecclesial and ecumenical implications of the document will be discussed.

Finally, the identity of the woman who received a miraculous healing attributed to Bl. John Henry Newman’s intercession, has been revealed.  The link to the full story as retold by Crux online magazine is HERE. 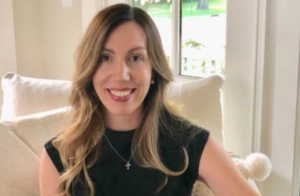 In short, Melissa Villalobos of Chicago, told Chicago Catholic that in 2011, “my husband brought home a couple of holy cards with Cardinal Newman’s picture on them. I put one in the family room and one in our master bedroom.”

“I would pass his picture in the house and I would say little prayers to him for whatever our family’s needs were at the time – the children, my husband, myself. I really started to develop a very constant dialogue with him,” said Villalobos, a mother of seven.

Her prayers had a miraculous result in 2013 when she started bleeding during the first trimester of a pregnancy. At the time she had four children – ages 6, 5, 3 and 1 – and a previous pregnancy that had ended in miscarriage.

“When I went to the doctor, he did an ultrasound and he said the placenta had become partially detached from the uterine wall, so there was a hole in the placenta and that hole was allowing blood to escape,” she said.

Villalobos also developed a subchorionic hematoma, which is a blood clot in the fetal membrane. It was two-and-a-half times the size of the baby.

Her condition reached a crisis point and she found herself alone on the floor of her bathroom, bleeding and unable to move or call for help.  She prayed to Bl John Henry Newman to make the bleeding stop.  And it did.

She got off the floor and verified there was no more bleeding and said, “‘Thank you, Cardinal Newman. Thank you.’ Just then the scent of roses filled the bathroom,” Villalobos said. “The strongest scent of roses I’ve ever smelled.”

“I thought to myself in that moment, ‘Oh my goodness! My baby is OK. I’m OK. My four children are OK. We’re all OK.’ And I said, ‘Thank you, Cardinal Newman,’” Villalobos said.

That afternoon Villalobos’ cure was confirmed during a weekly ultrasound. The doctor told her everything was “perfect” and there was no more hole in the placenta.   The baby was born at full term on December 27, 2013 with no medical problems.

“I was cured through Newman’s intercession so that I could continue an ordinary life, if you will, but at the same time be completely devoted to him and especially God himself and our church,” she said.

Her comment reminds us of a quote made by John Henry Newman:

“God has created me to do Him some definite service. He has committed some work to me which He has not committed to another. I have my mission. I may never know it in this life, but I shall be told it in the next. I am a link in a chain, a bond of connection between persons.

He has not created me for naught. I shall do good; I shall do His work. I shall be an angel of peace, a preacher of truth in my own place, while not intending it if I do but keep His commandments.

Inside the Vatican Pilgrimages will be in Rome for the canonization!  The date falls between two pilgrimages we are leading during the month of October that journey through Italy: the “Celebrating 25 Years of Inside the Vatican magazine, October 4-12″  and “Women Saints Through the Centuries with Barbara Heil, October 14-22.”  Thank you, Holy Spirit for directing our pilgrim paths to England in the footsteps of this “stone of faith” whose life is a path marker to Christ and to Rome to witness his canonization.

For more information on the pilgrimages mentioned above or to England, click HERE.