Christ’s Passion: On the Steps of Pontius Pilate 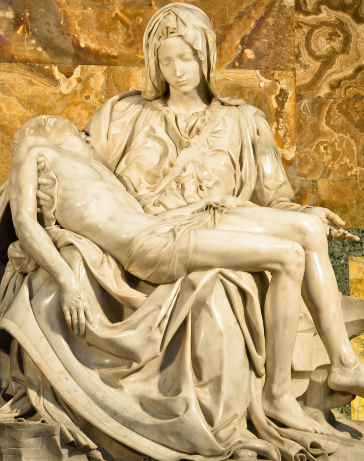 (Photo: Sculpture of Pieta by Michaelangelo)

Now Jesus stood before the governor; and the governor asked him, “Are you the King of the Jews?”  Jesus said to him, “You have said so.” But when he was accused by the chief priests and elders, he made no answer.  Then Pilate said to him, “Do you not hear how many things they testify against you?” But he gave him no answer, not even to a single charge; so that the governor wondered greatly.  Now at the feast the governor was accustomed to release for the crowd any one prisoner whom they wanted. And they had then a notorious prisoner, called Barabbas. So when they had gathered, Pilate said to them, “Whom do you want me to release for you, Barabbas or Jesus who is called Christ?”  For he knew that it was out of envy that they had delivered him up. Besides, while he was sitting on the judgement seat, his wife sent word to him, “Have nothing to do with that righteous man, for I have suffered much over him today in a dream.” Now the chief priests and the elders persuaded the people to ask for Barabbas and destroy Jesus.  The governor again said to them, “Which of the two do you want me to release for you?” And they said, “Barabbas.” Pilate said to them, “Then what shall I do with Jesus who is called Christ?” They all said, “Let him be crucified.” (Mt 27:11-22)

The Holy Stairs, upon which this conversation was held, were brought to Rome by St. Helena in the year 326AD. They are a series of 28 white marble steps located near the Basilica of St. John Lateran, which many pilgrims, and even some popes, have climbed on their knees, an act which has had an indulgence connected to it. The white marble was exposed for the first time in 300 years during the spring of 2019, but was then recovered with wood.

Our Easter pilgrimage in 2021 will take you to see the Holy Stairs in Rome, where you also may ascend.