Painting: Patron Madonna and protector of the Pinè plateau.

Ex-voto picture of the Pinetan community of 1737, with the image of the first sanctuary (Author: Niccolò Dorigatti – 18th century)

James Moser, a pious peasant from Montagnaga, had gone several times to the sanctuary of Our Lady of Caravaggio at the beginning of the eighteenth century. On one of his trips he brought an image of  the Madonna that was exposed on an altar of the church of Montagnaga – dedicated to St. Anna – on May 26 of each year. The story of Caravaggio’s graces and feasts aroused many’s desire to go to the famous Bergamo sanctuary. Among others there was also a young woman named Domenica Targa (9 August 1699 – 24 October 1764), born in a small town near Montagnaga called Guardia. However, it was difficult for her to obtain the consent of her parents.

Towards midday on Saturday 14 May 1729, Domenica stood with her herds in the “Palustel” basin (today called “Comparsa”). Suddenly, all the beasts, as if caught by terror, start to flee in disorientation. Domenica, who was reciting the rosary, comes out in an exclamation: “Jesus, Mary, help me!”. As soon as the invocation was pronounced, he saw before her a beautiful Lady in snow-white robes, who said: “My daughter, what are you doing?”  Domenica replied, “I say the rosary.”  The Lady praised her and, after making her express her ardent desire to go to Caravaggio, added: “Obey me. Don’t go to Caravaggio. Instead, on the evening of the feast of the Ascension, (that year was May 26), visit the church of St. Anna, where the painting of the Blessed Virgin of Caravaggio will be exhibited.

“Who knows if my parents will allow me to go to Montagnaga at that time!” observed the girl. “Don’t worry, they’ll allow you for sure!” added the beautiful Lady, and disappeared.

On May 26, 1729, Ascension Day, Domenica was permitted by her parents to to attend the function in the church of Montagnaga. The litanies of the Saints were sung that day to obtain the gift of rain. At the invocation “Omnes sancti Martyres”, Domenica  bent over on her right side, and remained in that position, oblivious as to what was happening around her, until the function was finished. When the priests, coming out of the sacristy, called her back to reality, she complained that she had been removed from a sweet vision: she saw the Blessed Virgin with the Child in her arms; on the right she had the rosary and was inviting her to manifest her appearance to all the people present. Domenica did experience great skepticism from some.

The zealous James Moser had the Trentino painter, Elena Zambaiti ,prepare a new and larger picture of the apparition of the Madonna to the visionary Giovanetta Varoli, witness of the apparitions that were at the origin of the famous Sanctuary in the Bergamasco. It is the sacred image that is still venerated in Montagnaga di Pinè. The altar was rebuilt in the form in which it is seen today. Everything was prepared with such zeal and speed, that already on September 8 of the same year 1729 it was possible to proceed to the blessing of the new altar. A solemn rite had been arranged with the participation of the parish priest of Pinè.

The third apparition occurred on September 8, 1729.  The people of Montagnaga were already gathered in the church, when the Virgin she appeared to the Seer with the Child on her arms, but this time wounded and bleeding, and was followed by the Sts. Joachim, Anna and St. Joseph. The Blessed Virgin herself blessed the picture, and then – after imposing on Sunday to cry three times “the Blessed Virgin comes” – she assured that this would be the place where she would welcome the prayers of her devotees. Showing, then, the wounds of his divine Child, he explained that they were caused by sins, and urged to pray a lot for the conversion of sinners. Of course, once again, Domenica Targa encountered skepticism, especially on the part of the parish priest of Baselga.  Two days later, the Blessed Virgin again appeared to Domenica urging her to share all her confessor who would help her.  In fact it was so. The diocesan Authority promoted a regular canonical process, which lasted several years, and which ended with the authorization to solemnly celebrate the feast of the apparition of Mary in Montagnaga on May 26.

The fifth and final apparition occurred in the church of St. Anna in Montagnaga, on May 26, 1730. Wrapped in a very bright light, and surrounded by a crowd of virgins, the Madonna invoked the blessing of the Lord over the multitude of present and made some healings. Domenica died on October 24, 1764. (Right below, photo of painting of Apparition of the Blessed Virgin to Caravaggio. Thaumaturgical image, emblem of the sanctuary.) 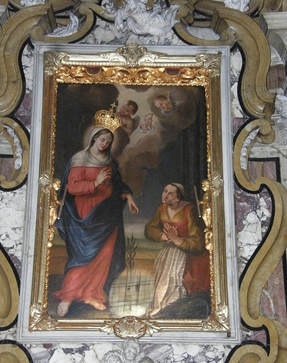 Here are some expressions taken from episcopal documents in this regard:

“… There is a duty to give thanks to the Blessed Virgin because she has deigned to show herself on one of our mountains, and there she declared she wanted to be venerated in particular. … To make us feel the assiduous presence of her maternal providence, she uses to show herself among her peoples in the places she chooses where to preferably accept the gifts of her faithful and rain the fruits of her powerful intercession more widely. We also have one of these lucky places on a peak in the Pinè hills; whence we are obliged to give thanks to the Virgin who deigned to leave a sign of special affection among us … “ : thus Bishop Eugenio Carlo Valussi in announcing to the Diocese the coronation of the” Madonna di Caravaggio in Pinè “on 13 July 1894.

The Bishop himself accompanied the request for consent to this act – addressed to the Chapter of St. Peter’s Basilica in Rome – with a report on the events of Montagnaga that began with these words: “ In Montagnaga di Pinè an image of the glorious Mother is venerated of God under the title of Madonna di Caravaggio. On the origin and relative cult of this thaumaturga Imagine we have information deduced from an ancient manuscript dictated by the lucky Shepherdess, to whom the Blessed Virgin appeared, and by the process established by the Royal Curia of Trento, which following this up to the year 1730 he granted permission to celebrate the feast of the Apparition with distinct solemnity on May 26, and later extended the same permit to May 14 of each year “.(At this point he briefly informed about the apparitions that had taken place).

Later, when in 1929 the opportunity arose to solemnly celebrate the second centenary of the apparitions, Bishop Celestino Endrici dedicated his pastoral letter of Lent to exhort the people to that same conversion to which even Our Lady would have exhorted in her apparitions in Montagnaga.

Whoever arrives in Montagnaga as a pilgrim and accepts its tradition of Marian apparitions in all simplicity, surely remains built on it.

Those who arrive as a tourist, skeptical about extraordinary religious phenomena, do not worry about it: visiting the places impregnated by the faith of multitudes of pilgrims will still leave pleasant sensations of serenity and inner peace in him too. Pinè is good for everyone. It is good for the heart. [2]