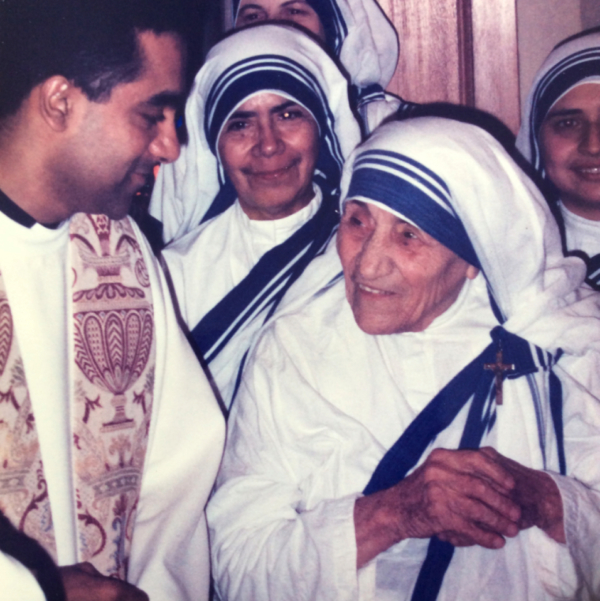 “I thirst.”  These were the words of Jesus on the cross.  These were also the words which called Mother Teresa to go to Kolkata and live for the poor.  What does Jesus thirst for?  At the time of the crucifixion, the Roman soldiers at the foot of the cross thought he thirsted for water and gave him vinegar to drink.  But St. Teresa of Kolkata and her role model, St. Therese of Lisieux, knew that Our Lord thirsts for souls.  While St. Therese of Lisieux was called to quench this thirst by remaining in her monastery and praying, St. Theresa of Kolkata was called to go out and live for the poor.

When she first heard this call, Mother Theresa gave all these excuses, “I am not capable,” and “I am not worthy.”  And Our Lord replied, “I want to use you for my glory, will you refuse?”  She could not.  Mother Theresa of Kolkata went on to found the Missionaries of Charity, whose aim was to quench the great thirst of Jesus Christ.  Those who joined professed four vows: chastity, poverty, obedience, and living wholly for the poor.  They fulfilled their mission in three ways: living a life of charity, living in deep prayer and penance, and accepting all sufferings.  In these things, St. Teresa of Kolkata led by example.

The example of both Mother Theresa of Kolkata and St. Therese of Lisieux show us that even the simplest and smallest of tasks, if done with great love, can give glory to God.

Resource: our Virtual Pilgrimage on St. Teresa of Kolkata (coming soon to YouTube)