The Basilica of St. Paul 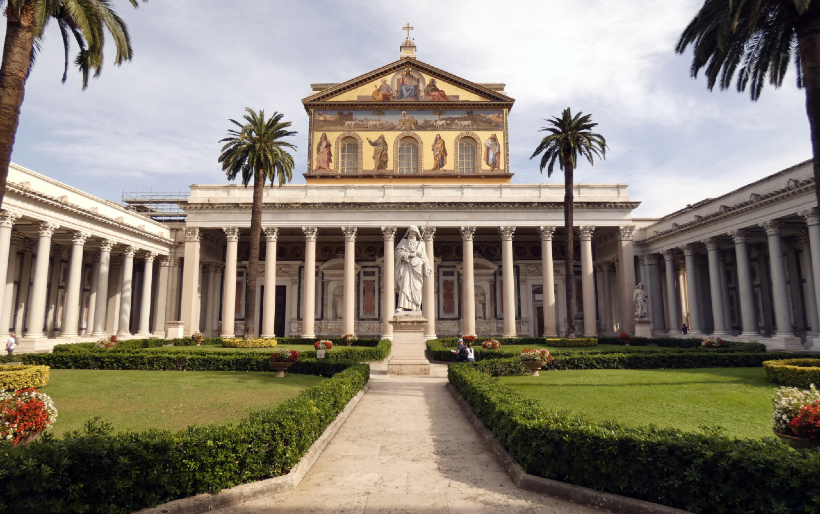 courtyard of St. Paul’s Outside the Wall

The Basilica of St. Paul is also known as St. Paul’s Outside the Wall.  St. Paul’s was built outside the walls of Vatican City quite simply because that is where St. Paul died.  The building itself was erected in the year 64 AD. During the 8th century, the church was modified to face St. Peter’s Basilica.  Another change occurred at the end of the reign of Pope Pius VII, in 1823, when a fire broke out and most of the structure was burned and collapsed.  Then, during the reigns of the next two popes, Gregory XVI and Leo XII, St. Paul’s was rebuilt and finished in 1854.  The reconstruction remained as close to the 8th century rebuilding as possible with some additions due to the generous donations of many.

So, what is a basilica?  Why do we build them?  A basilica is a pagan building whose main purposes were to focus on the emperor and show off his wealth.  Today, they have been christened.  We build them to focus on our emperor, God, and to show off his wealth both in heaven and on earth.  In St. Peter’s, there are statues of the saints and St. Paul’s holds the collection of papal portraits.  The beautiful mediums are used to demonstrate the wealth of God on earth.  And the images depicted call us to remember the wealth of God in heaven.

Resources: our Virtual Pilgrimage to St. Paul’s Outside the Wall (coming soon to YouTube)