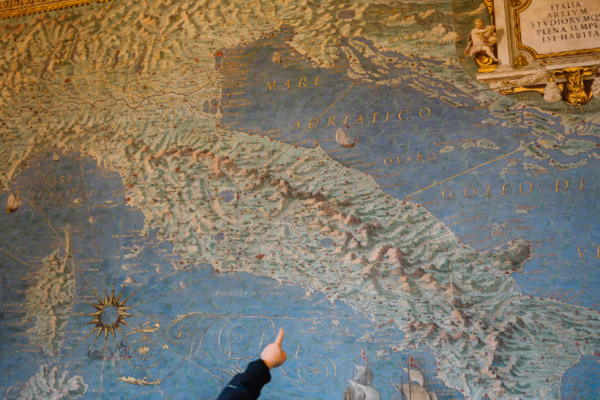 Italy in the Gallery of Maps in the Vatican Museum (fazon – stock.adobe.com)

Even though Italy has a history of integration, the people of Italy also identify themselves with the place of their birth, whether it be region or city.

This sense of identity can be understood by looking at earlier civilizations.  The Hebrews, for instance, believed that God was tied to their country Israel.  Thus, when they entered the Babylonian Exile, they mourned for loss of their God.  When one nation conquered another, the loser was almost always looked down on due to their place of birth.

Integration, however, has also been a part of Italian culture since the Roman Empire.  The Roman Empire was inclusive in its ruling of people.  Allowing all to participate in its administration.  “Provincials (non-Romans) could become judges, senators, generals, emperors.  There were no barriers of color or religion.”  Later St. Benedict wrote his Rule for monks which was flexible in its use and, therefore, adaptable.

The balance seen in Italy between the sense of identity and a sense of integration allows people to not only feel as if they belong, but also maintains their individuality.  It was in the Italian moderation between integration and identity that many Catholic saints were born or fostered.

This is the first post of our Saints of Italy Pilgrimage Blog series.  Throughout the year, we will highlight some of these great Italian Saints.