St. Margaret of Scotland: In Scotland 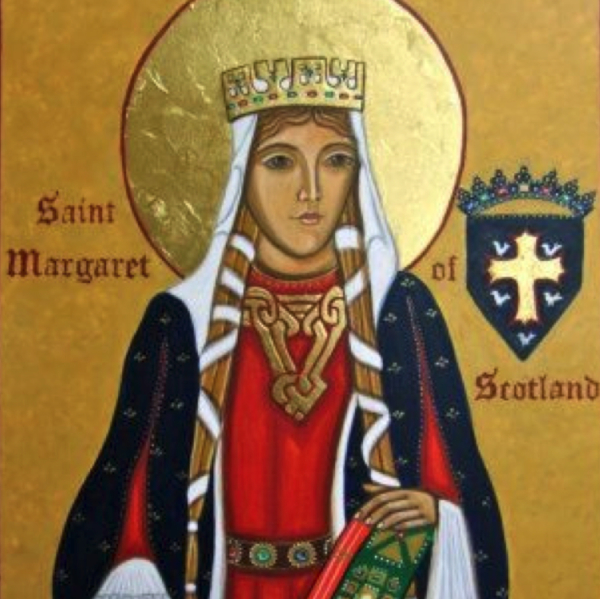 icon of St. Margaret of Scotland

King Malcolm met Margaret when her ship docked at what is now called St. Margaret’s Hope near North Queensferry.  Malcolm fell in love with the beautiful lady.  Margaret eventually agreed to marry him out of duty and because he could speak English.  They were married at a church that would later become Dunfermline Abbey.

Dunfermline at the time was the capital city.  Margaret, having noticed that the Celtic Christians had been largely cut off from the Papacy, was determined to create a more uniform rite.  The Celtics were disorganized.  So Margaret began organizing the Christianity of Scotland with Benedictine monks.  She invited the monks to build an abbey in Dunfermline.  Though St. Margaret desired to bring them closer to European mold, she was not opposed to Celtic monasticism.  St. Margaret supported at least two Celtic communities and, with the help of her husband, rebuilt the abbey of Iona.  Though she thought Celtic spirituality should become more Roman, St. Margaret respected the authentic form of spirituality which she encountered in the Celts.

St. Margaret would administer to the poor herself, giving them food, clothing, whatever they needed.

King Malcolm and Queen Margaret had eight children.  The first of which, Edward, would die with his father in the Battle of Alnwick.  Edmund was their second son.  Ethelred, their third child, would become abbot of Dunkeld, Perth and Kinross, Scotland.  Edgar would rule Scotland from 1097 – 1107.  Edgar would be succeeded by his brother Alexander I, who would reign from 1107 – 1124.  Their sister Edith would be renamed Matilda and become Queen of England. Mary would become the countess of Boulogne.  And the youngest, David I, would be King of Scotland from 1124 – 1153.

Resources: our Virtual Pilgrimage In the Footsteps of St. Margaret of Scotland (watch on YouTube here)