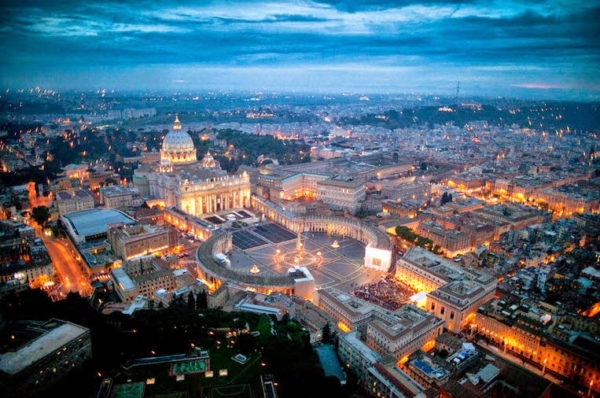 Latium (Lazio) – The region of Latium is in central Italy on the western side of the peninsula.  The area is best known for the capital city of Rome, but it is very diverse both geographically and culturally.  The western border is formed by the Tyrrhenian Sea that gives way to the flat coastal plains.  The plains continue past Rome, and are transformed into the rolling topography of Tuscany and Umbria in the north, and the hills and extinct volcanic mountains of Campania in the south.  The Apennine Mountains occupy the eastern edge of the region and the Tiber River enters the plains from the northern valleys and flows through Rome to the sea. (Heater, 68)

He who desires aught else but God deceives himself utterly.

Philip Neri was born July 21, 1515.  At the age of eighteen, the young saint moved in with his rich uncle near the Benedictine abbey of Monte Cassino in the hopes of a successful career.  Spending much of his time in prayer and contemplation, Philip would go into the quiet places about the area.  While in “quiet seclusion” he “experienced a ‘conversion’ and decided to leave the prospect of wealth for a spiritual life in Rome.” (Heater, 90-91)

He moved to Rome and began to study and later to preach.  Philip Neri enjoyed silent prayer and visiting the Basilica of San Sebastiano, “where he would go down into the catacombs and enter into silent communion with God.”  (Heater, 91). It was amidst the catacombs where he first experienced the fire of the Holy Spirit in his mouth and heart.

Having been in Rome for fifteen years, the future saint and a group of laymen began helping pilgrims.  Their success brought Philip some fame, and so he was advised to become a priest in order to better aid those who were in his care.  St. Philip Neri was ordained in 1551.

Later, the group of laymen who met for prayer and spiritual discussion, led by Philip Neri, became known as the Oratory.  At first they had no formal place of meeting, but after an incident, were given Santa Maria in Vallicella to gather.  St. Philip wanted to retain the informal fellowship in which the group had begun, and so, did not seek to become an official order of the church.

The last days of St. Philip Neri were healthy for the most part.  Having fallen ill in April 1594, he was miraculously cured by a vision of the Madonna; but fell sick once again a year later.  Philip Neri died peacefully on May 25, 1595.

St. Philip Neri is the patron saint of humor and joy.