Life of St. Rita of Cascia 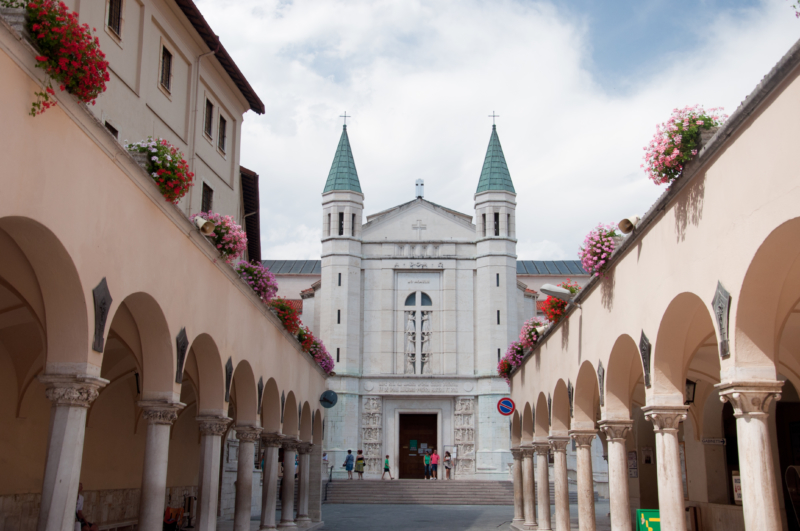 Basilica of St. Rita of Cascia

Cascia – This small town that lies east of Spoleto in rural southeast Umbria began as a medieval village, growing up around an ancient castle in the Corno Valley.  Little of the original settlement survived, having been destroyed by frequent earthquakes or remodeled into modern facilities.  What remains are two quality medieval churches: San Francesco and San Antonio.

The modern Sanctuary of St. Rita, built between 1937 and 1947, is the primary attraction of the town, drawing thousands of pilgrims each year to this remote area to celebrate the life of the saint.  The older parts of the town are charming in a typically rural Italian way.  Roccaporena, the birthplace of St. Rita, is located 4 miles (6 km) west of Cascia, at the end of a narrow meandering road that winds its way through the ragged hills and sharp peaks of the area, culminating in the tiny picturesque village.

Sisters, I am not afraid to die.  I know already what it is to die.  It is to close the eyes to the world and open them to God.

Rita lived the first part of her life in the world and for those around her who needed her.  First, her parents who were old and required their daughter to care for them as well as marry well enough to do so.  Next, her husband and two sons.  The former being a violent man was often unemployed.  St. Rita prayed for her husband, who, under her influence, repented.  Shortly following his conversion, Rita’s husband was murdered by bandits.  The two sons sought revenge for their father’s murder, and Rita prayed for them as well, that they may not incur God’s anger.  Again, her prayers were answered and her sons died within the year.

After all this, St. Rita of Cascia was free to devote her life to God and sought to join the monastery of Saint Mary Magdalene.  She was refused three times.  Then, as she prayed for God’s help, she fell asleep and dreamed Sts. Augustine, Nicolaus of Tolentino, and John the Baptist escorted her into the convent.  The nuns of the monastery found her within the walls the next morning and admitted her into their order, where she became a great example for her sisters.

St. Rita experienced many miracles including her share in Christ’s Passion in a thorn on her forehead and a rose blooming in the middle of winter.

Rita of Cascia died in 1446 at the age of seventy-six.  Her feast is celebrated on May 22nd. She is the patroness of impossible causes.