On August 15, 1652, the deaf and mute shepherdess, Jeanne Courtel, then aged 12, was tending her father’s flock when Our Lady appeared to her. Jeanne was healed of her afflictions immediately.  Our Lady asked Jeanne to have a chapel built for her veneration. The conversation continued and she asked Jeanne for one of her lambs, to which Jeanne replied, “These sheep are not  mine, they are my father’s.” Our Lady offered to care for the sheep while Jeanne left to obtain permission from her father to give Our Lady one of his sheep.

In the days that followed, Our Lady appeared several more times always asking that a chapel be built.  She even also said: “To prove that the message that comes from heaven’s command, I tell you that you will discover a few steps from the fountain of Saint-Gal … an image that was honored in ancient times.”  A thousand years earlier in 610, St. Gall came to the area and built a hermitage.  He also sculpted a statue of the Blessed Virgin Mary.  On August 20, 1652, the statue was located in the pond and found in excellent condition even though it had been submerged for centuries. (Photo, left of statue from The Miracle Hunter website)

A month later, the local bishop visited the area to make his investigation.  He formally recognized the validity of the apparitions and blessed the first stone laid as the foundation for the chapel. It was completed four years later.  Jeanne Cortel died at the age of 63 in 1703 and was entombed in the shrine at the apparition site.  In 1779, the chapel was enlarged due to the growing crowds of pilgrims that came to visit.  In 1950, over 20,000 pilgrims attended a coronation of the statue at the site.  [1][2][3]

Benoite Rencurel, a poor shepherdess, was born in 1647. The Virgin Mary started appearing to her in 1664 and continued visiting her throughout the rest of her life, at least once a month for 54 years!  When Mary first appeared to her, Benoite was only 14 years old and could neither read nor write. Our Lady taught her what she would need to know to carry out all the Our Lady asked of her.

During the apparitions, the Blessed Mother asked for a church and a house for priests to be built, with the intension of drawing people to greater conversion, especially through the sacrament of penance. During the winter of 1664-1665, Benoit went up to Laus frequently, each time receiving a vision of the Blessed Mother, who told her to “pray continuously for sinners.” News of the apparitions spread throughout the entire region.  The thousands of pilgrims came to the little thatched chapel in Laus with a great number of healings and conversions.

Fr. Gaillard arrived seeking graces and received them. But Laus was  not in his diocese so he contacted the appropriate Vicar General, Fr. Lambert. Initial Fr. Lambert was suspicious of the apparitions, but after some intense investigations, he finally approved them upon witnessing the healing miracle of a young crippled woman during a Mass he was celebrating in the small little chapel.  Her nerve contraction disorder was well documented by two surgeons. On October 7, 1666, Fr. Gaillard laid the first stone for the church on the  Feast Day of the Holy Rosary. It was also the day that Benoit became a Dominican Tertiary.  (Photo, below right, image of Benoit during construction of the church. Photo from the official website of the Sanctuary of Laus.) 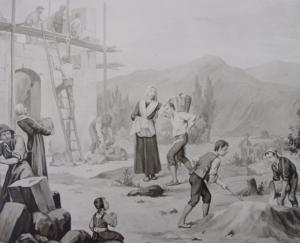 The church was completed in four years.  The earliest historians reported a sweet heavenly smell coming from the church that permeated the valley. For years, flowers were not permitted in the church so that all that entered could experience the fragrance. The phenomenon is still experienced today. 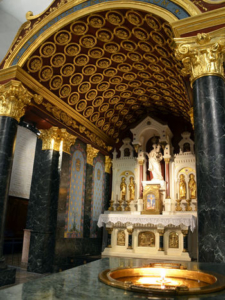 During the winter of 1665, Our Lady also instructed Benoite to invite those with illnesses to take oil from the sanctuary lamp and apply it to themselves while asking for Our Lady’s intercession and having great faith and belief, they would be healed. Many physical, moral and emotional healings have been reported from this action. (Photo left is “Oil of the Sanctuary”, photo from the official website, Sanctuary of Laus.)

Some messages of Laus:

Benoit also had appearances of Christ and received the stigmata of his passion. She lived as a hermit in the place of the apparitions and became a teacher of spiritual life for all. Until the end of her life she continued to have apparitions of Mary and died in the odor of sanctity in 1718. She was bestowed the title Servant of God by Pope Pius IX. On April 3, 2009, Benedict XVI declared Benoîte “Venerable”. [4][8]

A few saints with a particular devotion to Our Lady of Laus: include St. Eugene De Mazenod (1782–1861), founder of the Oblates of Mary Immaculate; and St Peter Julian  Eymard (1811–1868), founder of the Blessed Sacrament Fathers and Servants. When Saint Peter Julian was eleven years old he made a sixty-kilometer pilgrimage on foot in order to pray for nine days at the shrine while preparing for his First Communion. Later he wrote, “That is where I first came to know and love Mary.” [8]

St. Margaret Mary Alocoque is best known for having a vision in 1675 of Jesus revealing His Sacred Heart ablaze with love and calling for return of love from all of humanity.  She also had an early great devotion to the Blessed Virgin Mary, who appeared to Margaret and helped her prepare for the work Our Lord had planned for her.

Margaret was born on July 25, 1947 at Janots, a small town in Burgundy. She was the fifth of seven children of a prosperous family. Age age 4, she made a vow of chastity to Our Lord although admitting later that she had no idea what the words vow or chastity meant.  At age 8, her father died and she was sent to live with the Urbanist nuns of Chartolle and she found value in their way of life. From ages 9 through 15, Margaret was afflicted with a rheumatic fever that kept her bedridden. She finally returned to her home where other family members had come to help the family. She was seriously ill and found comfort in the Blessed Virgin Mary, making a vow to become one of her daughters.  As soon as she made this vow, she was cured. 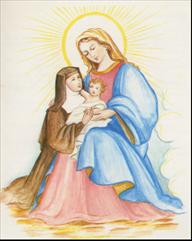 Aside from obtaining her health, this vow accomplished in Margaret a deep sense of union with the Blessed Virgin Mary. However, her road to sanctity was not free of detours. “On recovering my health,” she later confessed, “I thought only of seeking pleasure in the enjoyment of my liberty, without concerning myself much about the fulfillment of my promise. I gave myself up to vanity and the affection of creatures, flattering myself that the tenderness which my mother and brothers had for me would allow me to amuse and enjoy myself as much as I liked…”

The Blessed Mother reprimanded her when she saw her almost yielding to the terrible struggle that she felt within herself. On one occasion, while seated and reciting the Holy Rosary, Our Lady appeared to her and gave her the following reprimand, which she never forgot: “I am surprised, my daughter,” she said, “that you serve me so negligently!” These words left such an impression on her soul that they served her as warning for her whole life.

But our Blessed Virgin is also tender and consoling. One day, she told Margaret: “Do not fear anything; you will be my true daughter, and I will always be your good mother.” (Photo, right of the Blessed Virgin Mary and Margaret, from the piercedhearts.org website)

Saint Margaret made another vow to Our Lady: to fast every Saturday and to recite her Office of the Immaculate Conception. Seeing her ardent desire of total consecration, the Blessed Mother helped her reach her goal.

As life proceeded, things at home became very difficult for Margaret and her mother, being treated as servants in their home by the family members that had moved in.  Margaret was drawn even more to adoration of the Blessed Sacrament deepening her relationship with Jesus. Jesus said to her: “I have chosen thee to be My spouse, and we pledged each other fidelity when thou didst make thy vow of chastity. It was I who urged thee to make it, before the world had any share in thy heart, because I wished to have it quite pure… And then I confided thee to the care of my Holy Mother, that she might fashion thee according to My designs.”

Margaret entered the Visitation Monastery on June 12, 1671 and she received three weapons from Our Lord: a delicate conscious, Holy Obedience and Her Holy Cross. In 1675 the first of several revelations of the Sacred Heart of Jesus were made to Margaret Mary. There were four revelations made to Margaret and she experienced numerous supernatural interventions. She died October 17, 1690 after 18 years of religious service.

Promises of the Sacred Heart of Jesus 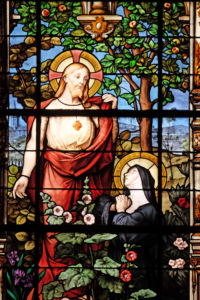 Of the many promises Our Lord Jesus Christ revealed to Saint Margaret Mary in favor of souls devoted to His Sacred Heart the principal ones are as follows:

1. I will give them all the graces necessary for their state of life.
2. I will give peace in their families.
3. I will console them in all their troubles.
4. I will be their refuge in life and especially in death.
5. I will abundantly bless all their undertakings.
6. Sinners shall find in my Heart the source and infinite ocean of mercy.
7. Tepid souls shall become fervent.
8. Fervent souls shall rise speedily to great perfection.
9. I will bless those places wherein the image of My Sacred Heart shall be exposed and venerated.
10. I will give to priests the power to touch the most hardened hearts.
11. Persons who propagate this devotion shall have their names eternally written in my Heart.
12. In the excess of the mercy of my Heart, I promise you that my all powerful love will grant to all those who will receive Communion on the First Fridays, for nine consecutive months, the grace of final repentance: they will not die in my displeasure, nor without receiving the sacraments; and my Heart will be their secure refuge in that last hour. [10]

For a more detailed description of the life of St. Margaret Mary, the Apostle and Love for the Sacred Heart of Jesus, follow the link in Resource Item number 10 below.