Above: Shrine of Our Lady of Guadalupe.  Tilma (original paint), Mexico City, Mexico

After the Spanish conquest of Mexico in the 16th century, Franciscan missionaries seeking to convert the Aztecs to Christianity destroyed their temples and idols. The missionaries claimed they were acting in the interest of the people’s spiritual wellbeing, but the death of their gods left them with a sense of hopelessness.

Other Spaniards enslaved the indigenous people, whom they considered less than human.

“If God does not provide a remedy from His hand, this land is about to be lost,” Mexico’s first bishop, Franciscan Friar Juan de Zumárraga, wrote in a letter to the king of Spain.

On Dec. 9, 1531, Juan Diego Cuauhtlatoatzin, an indigenous Catholic convert, was walking to the city of Tlaltelolco in central Mexico to attend Mass. As he approached a hill called Tepeyac, a rainbow appeared amidst shimmery white clouds and he heard a woman calling his name.

“Her dress shone as the sun, as if vibrating, and the stone where She stood, as if shooting rays,” according to the “Nican Mopohua,” one of the earliest written accounts of the Guadalupe apparitions. “Her splendor was like precious stones, like a jewel, everything that is most beautiful, She was. The ground dazzled with resplendence of the rainbow in the fog. The mesquites and the cacti and all the other plants that usually grow there looked like emeralds, the foliage like turquoises, and their stems and thorns shone like gold.” 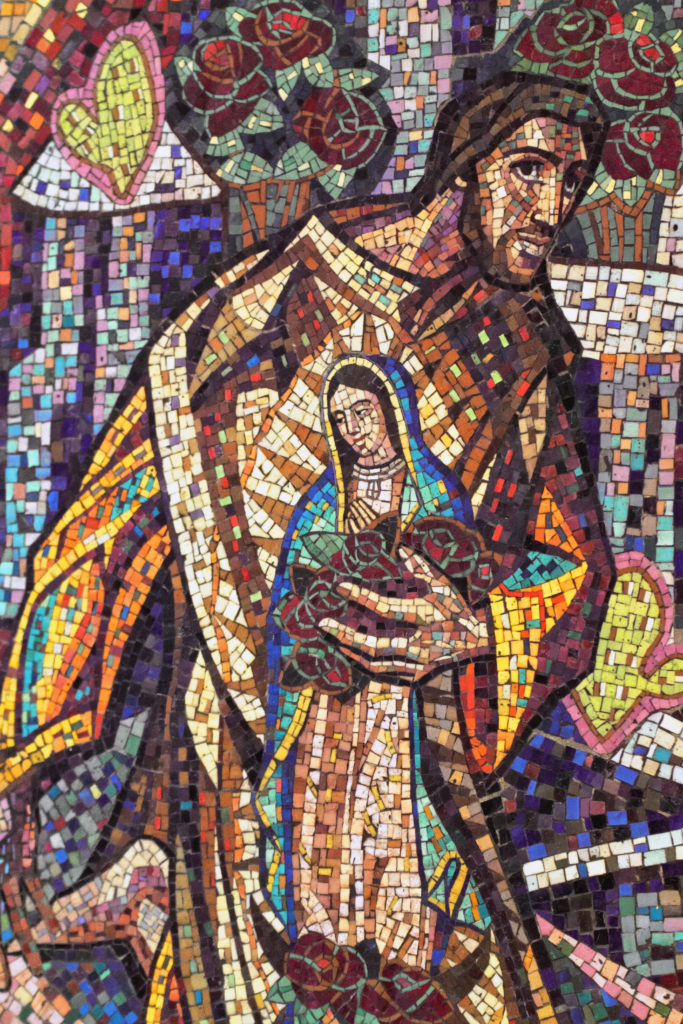 Speaking in the local language, Nahuatl, the dark-complected woman identified herself as Mary, the Mother of God. She instructed Juan Diego to tell the bishop that she would like a “sacred house” to be built in her honor on the hilltop.

The skeptical bishop asked Juan Diego to return with proof that what he was saying was true.

Again Mary appeared to Juan Diego, asking him to gather some flowers growing on the normally barren hillside. She wrapped the flowers in Juan Diego’s “tilma,” or cloak.

When Juan Diego opened his tilma to present the flowers to the bishop, the men were astonished to find the Virgin’s image miraculously imprinted on the fabric.

As word of the miracle spread, people flocked to the site to venerate the image, which the Franciscans named after the dark-skinned Virgin of Guadalupe in Extremadura, Spain. Soon thousands of indigenous people sought to be baptized.

The very fact that the image has lasted nearly 500 years could itself be considered a miracle, according to some experts who have studied the tilma.

Over time, humidity and salt buildup eroded the stonework of the church where the tilma was first housed, but the tilma, made of a delicate plant fiber, remains remarkably well-preserved to this day.

For 116 years the unprotected image was exposed to the elements until 1647, when it was put behind glass. During that time, countless people touched the tilma and burned candles and incense near it.

Acid was once spilled on the tilma and a bomb detonated beneath it, but still it has survived.

Today it is displayed in Mexico City’s Basilica of St. Mary of Guadalupe, one of the world’s most visited Catholic shrines.

Pope John Paul II proclaimed Juan Diego a saint on July 31, 2002. He also declared Our Lady of Guadalupe “Queen of All America.” Her feast day is Dec. 12.

Information in this article is derived from “Our Lady of Guadalupe and Saint Juan Diego: The Historical Evidence” by Eduardo Chávez, postulator for the canonization cause of Juan Diego. [1]

For more information about Our Lady of Guadalupe, including a timeline, discussion of symbols, images and videos, visit The Miracle Hunter online LINK