Pope Francis prays inside the Sanctuary of the Holy House on the feast of the Annunciation in Loreto, Italy, March 25, 2019. (CNS photo/Vatican Media)

Our Lady of Loreto and the Holy House of Loreto

We are including this site in the history of Marian apparitions as tradition holds this is the actual house of Nazareth, where the Virgin Mary was born, raised and greeted by the Angel Gabriel. Tradition further holds that the Holy House arrived in Loreto on Dec. 10, 1294 after a miraculous rescue from the Holy Land as the Crusaders were driven out of Palestine at the end of the 13th century. The following is from a blog posting by Catholic News Agency in December of 2018:

What do Galileo, Mozart, Descartes, Cervantes, and St. Therese of Lisieux have in common? They all traveled hundreds of miles to step inside the Virgin Mary’s house, which is preserved inside a basilica in the small Italian town of Loreto. Catholic pilgrims have flocked to the Holy House of Loreto since the 14th century to stand inside the walls.

In other words, if it is actually the house of Nazareth, it is where the “Word became Flesh” at the Annunciation, a point on which the history of the humanity turned.

There is an often repeated story that angels carried the Holy House from Palestine to Italy. While modern listeners may doubt the legend’s veracity, historic documents have vindicated the beliefs of pious pilgrims over the centuries – with an ironic twist.

In 1900, the pope’s physician, Joseph Lapponi, discovered documents in the Vatican archive, stating that in the 13th century a noble Byzantine family, the Angeli family, rescued “materials” from “Our Lady’s House” from Muslim invaders and then had them transported to Italy for the building of a shrine.

The name Angeli means “angels” in both Greek and Latin.

Further historic diplomatic correspondences, not published until 1985, discuss the “holy stones taken away from the House of Our Lady, Mother of God.” In the fall of 1294, “holy stones” were included in the dowry of Ithamar Angeli for her marriage to Philip II of Anjou, son of King Charles II of Naples.

A coin minted by a member of the Angeli family was also found in the foundation of the house in Loreto. In Italy, coins were often inserted into a building’s foundation to indicate who was responsible for its construction.

Excavations in both Nazareth and Loreto found similar materials at both sites. The stones that make up the lower part of the walls of the Holy House in Loreto appear to have been finished with a technique particular to the Nabataeans, which was also widespread in Palestine. There are inscriptions in syncopated Greek characters with contiguous Hebrew letters that read “O Jesus Christ, Son of God,” written in the same style inscribed in the Grotto in Nazareth.

Archaeologists also confirmed a tradition of Loreto that third century Christians had transformed Mary’s house in Nazareth into a place of worship by building a synagogue-style church around the house. A 7th century bishop who traveled to Nazareth noted a church built at the house where Annunciation took place. 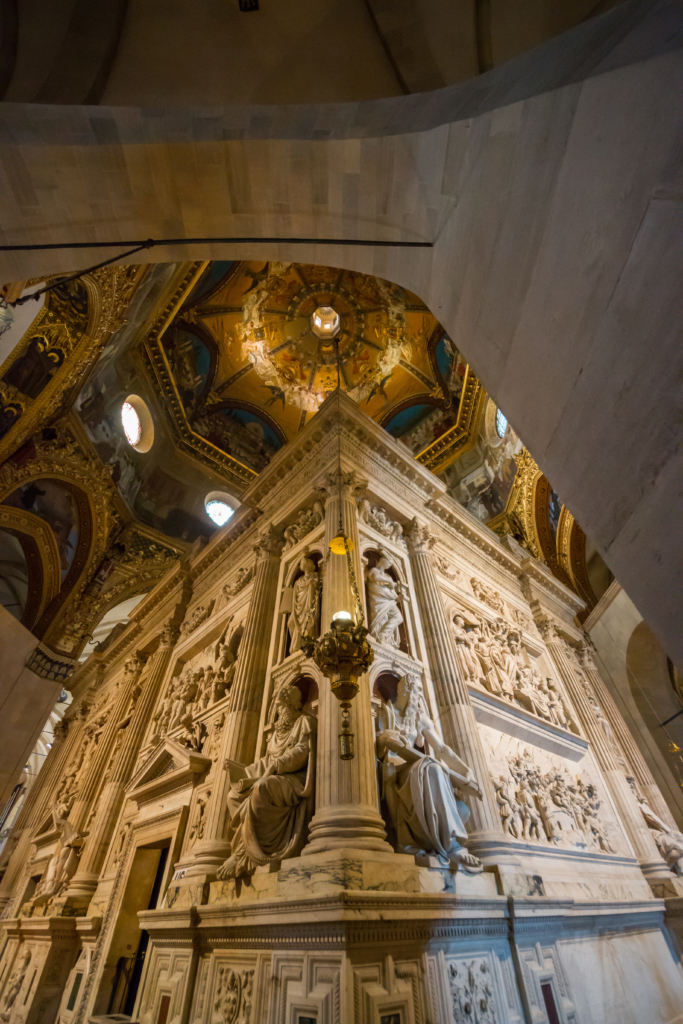 Interior view of the Shrine of Loreto, detail of the Holy House, Loreto, Italy

From St. Francis de Sales to St. Louis de Montfort, many saints visited the Holy House of Loreto over the centuries. St. Charles Borromeo made four pilgrimages in 1566, 1572, 1579, and 1583.

St. John Paul II called the Holy House of Loreto the “foremost shrine of international import dedicated to the Blessed Virgin” in 1993.

The victory over the Turks at Lepanto was attributed to the Virgin of Loreto by St. Pius V, leading both General Marcantonio Colonna and John of Austria to make pilgrimages to the shrine in 1571 and 1576 respectively.

Christopher Columbus made a vow to the Madonna of Loreto in 1493 when he and his crew were caught in a storm during their return journey from the Americas. He later sent a sailor to Loreto on a pilgrimage of thanksgiving on behalf of the entire crew.

Queen Christina of Sweden offered her royal crown and sceptre to the Virgin Mary in Loreto in 1655 after her conversion from the Lutheran faith to Catholicism.

Napoleon plundered the shrine and its treasury on Feb. 13, 1797, taking with him precious jewels and other gifts offered to the Virgin Mary by European aristocracy, including several French monarchs, over the centuries. Yet, the object of real value in the eyes of pilgrims, the Holy House of Mary, was left unharmed.

In a homily in 1995, Saint Pope John Paul II called the Holy House of Loreto, “the house of all God’s adopted children.” He continued:

“The threads of the history of the whole of humankind are tied anew in that house. It is the Shrine of the House of Nazareth, to which the Church that is in Italy is tied by providence, that the latter rediscovers a quickening reminder of the mystery of the Incarnation, thanks to which each man is called to the dignity of the Son of God.”[1]

We will visit the Holy House of Loreto this upcoming May during our “Journey Toward the Face of Christ” Pilgrimage. For information about this pilgrimage, click HERE.