Miracles of St. Rita of Cascia 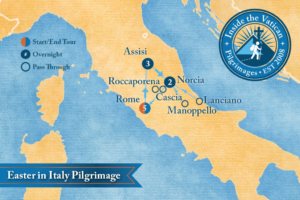 Map of our signature Easter pilgrimage

Last year, a blog post was presented giving a summary of the life of St. Rita on her feast day, which you can read here.  On this anniversary of the death of St. Rita, I would like to provide more details concerning some of the miracles associated with her.

A lesser known miracle of St. Rita happened on her deathbed, when one of her cousins came to visit her.  Rita asked her relative to bring her a rose from her home town of Roccaporena.  The cousin did not think the dying woman to be quite in her right mind, since the request was made in the middle of winter when roses do not grow.  However, upon returning to Roccaporena, one rose was blooming in the midst of the freezing snow, and Rita’s cousin quickly brought it to Cascia for her.  Again, the dying saint asked her relation to bring her figs from their family garden where the rose had been found.  This time the cousin did not doubt and brought the figs to her, and they were shared with the sisters.

Like St. Francis of Assisi, St. Rita was a stigmatic, but she only bore one wound.  Her forehead was pierced by one of the thorns from Our Lord’s crown, and the wound stayed with her until her death.  She had been listening to a Franciscan friar speak on the Passion and death of Jesus Christ, and retreated to a private place to pray.  “Absorbed in prayer and grief she declined, out of humility, to ask for the visible wounds of the stigmata as had been given to St. Francis, but asked instead for one of the thorns so that she could experience this suffering for love of our Saviour.”  If you see her incorrupt body, the wound is still visible.

When St. Rita died, she appeared as if asleep.  Joan quotes another author saying, “Her body had not the sign of a corpse… she did not appear to be a prey of death, but only sleeping peacefully.  She appeared years younger than she was, and her face was more beautiful in death than in life.”  Her incorrupt body is now kept in the Chapel of St. Rita in Cascia.

Resource: Mysteries, Marvels, Miracles in the Lives of the Saints by Joan Carroll Cruz (Tan Books and Publishers: Rockford, Ill), 1997.