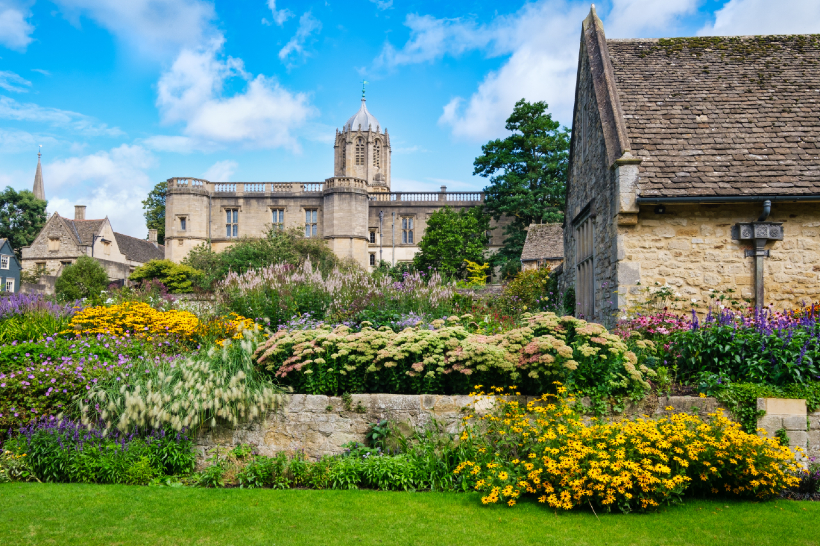 The Christ Church College and gardens at Oxford University

Born July 21, 1515, St. Philip Neri was a Florentine Italian who became known as the Second Apostle of Rome.  As a young man, he left the path his family had planned for him and went to live in Rome, later becoming a priest.  He began missionary work within Rome and became acquainted with St. Ignatius of Loyola.

In 1548, Philip Neri founded the Confraternity of the Holy Trinity of Pilgrims and Convalescents in order to aid the pilgrims who “flocked to Rome” and to relieve discharged hospital patients who were not yet able to work.  Three years later, St. Philip Neri was ordained a priest.

He is also associated with the Seven Churches Walk, as wikipedia states:

Philip sometimes led “excursions” to other churches, often with music and a picnic on the way.  In 1553, Neri started the tradition of making a one-day pilgrimage to seven churches, starting from St. Peter’s Basilica and ending at the Basilica di Santa Maria Maggiore. He and a few friends would gather before dawn and set out on their “Seven Churches Walk”. The street which links Basilica of Saint Paul Outside the Walls with San Sebastiano fuori le mura is still called “Via delle Sette Chiese” (Seven Churches Walk). These pilgrimages were designed to be a counterpoint to the raucous behavior of Carnival.  The Walks became very popular and began to attract others.

What St. Philip Neri is most noted for, however, is his Congregation of the Oratory, which began in 1556.  The members would gather in a hall and have prayers, readings from various sources, and hymns generally followed by lecture or discussion on the topic of the day.  As the Congregation grew, many of the members themselves became Roman missionaries, following St. Philip’s example.

On the Feast of Corpus Christi, May 26, 1595, Philip Neri died and is remembered as a patron of laughter, humor, and joy.  In Rome’s Cheisa Nuova,  you can go visit and venerate his body.

Almost three centuries after St. Philip Neri’s death, St. John Henry Newman brought Neri’s Congregation of the Oratory to London.  You can go and visit on our Mary’s Dowry Pilgrimage to England.