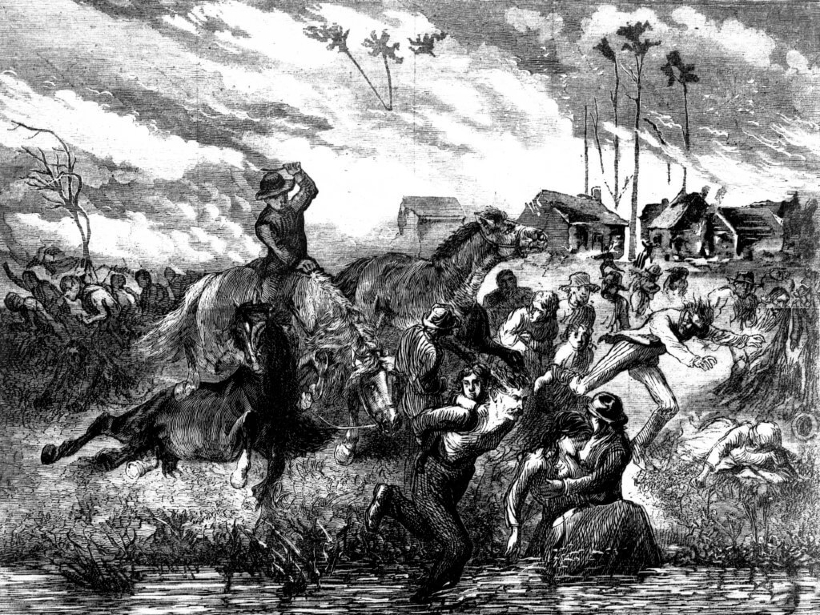 Protection from the Deadly Peshtigo Fire

On October 8, 1871, the same day as the Great Chicago Fire, a less-known but far more deadly fire spread the northeastern Wisconsin in what would come to be called the Peshtigo Fire, consuming 1.2 million acres of forest and farmland and claiming more than 2,000 lives, making it the deadliest wildfire in recorded U.S. history.

As smoke and ash filled the sky, families and local friends brought their children and animals to the Shrine grounds, which over the years had grown into a five-acre campus with a boarding school and expanded chapel.  Throughout the night, the faithful processed with Adele around the Shrine’s perimeter, chanting litanies, praying the Rosary, and bearing a statue of Mary.  The fire came no further than the fence posts marking the property when in the morning, rainfall extinguished the raging flames.  All who had come to the Shrine that night were protected, but in the surrounding region the farmland was destroyed and an estimated 1,200-1,400 people perished in the wildfire.

“[It was] an emerald isle that shone out amid a sea of ash,” said Fr. Peter Pernin, the pastor at St. Mary Church in Peshtigo, Wisconsin. This priest and a few others had survived the fire by submerging themselves in the Peshtigo River. While there are those who will insist on natural reasons for the fire surrounding but not consuming the Shrine, those who survived the night would tell that they were protected through the intercession of the Blessed Mother who had heard their prayers and spared them.

After the events of the Peshtigo Fire, the number of those seeking healing and protection from the Blessed Mother increased.

The deadliest fire in American history, the Great Peshtigo Fire