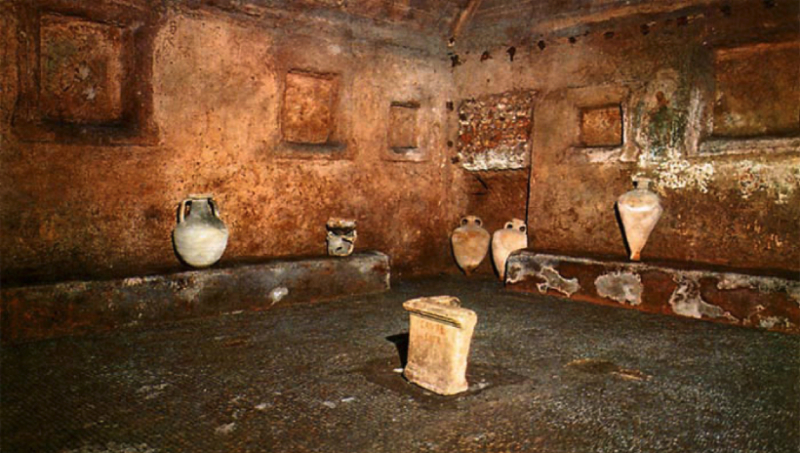 Across the passageway dividing the Clementine mansion from the Roman apartment complex on the other side, still deep beneath the pavements of the modern city, emerge the shadowy images of Corinthian columns, roman bas-reliefs and the fragments of large granite pots. There are the remains of a small Mithraic temple, dated to the end of the second or early third century AD, which was built into the first-century insula. The visitor first comes upon the temple antechamber, with stone seating for the initiated, thick pilasters supporting the vestibule arches, and a stucco ceiling with geometric and floral patterns. On the other side, the triclinium, or banquet hall, is an artificial cave with stone benches on two sides. What was probably the altar, a marble block between the benches, has a classical bas-relief portraying Mithras in his Phrygian cap, plunging his dagger into a bull. At the end of a corridor leading from the triclinium and vestibule, another room has been identified as the probable instruction room. There are seven niches here (taken to represent the seven-stage Mithraic initiation), a black and white mosaic floor, and a faded wall portrait of a bearded and scarlet-cloaked Roman.

In Mithraic dogma, the god Mithras was born of a rock to be the bearer of life and fertility to the world. At Apollo’s command, Mithras slew the bull from whose blood all good forms of life emerged, evil ensuing from a scorpion’s sly theft of some of the blood. Cult members celebrated a ritual banquet commemorating Mithras’ victory feast with Apollo, before the two ascended into heaven in the sun god’s chariot. Introduced to Rome during the time of Pompey (67BC), Mithraism became popular among the Roman legions in Asia Minor and spread rapidly throughout the Empire. The cult reached its peak in the late second century, when even the Emperor Commodus (180-92) converted, and was finally outlawed in the late fourth century.

On the second level of S. Clemente the air is less dank and the sound of water is fainter, but an atmosphere of mystery still prevails. For this is a fourth-century church, which was filled in, abandoned and forgotten for eight long centuries until an amateur nineteenth-century archaeologist dug his way through hundreds of years of rubble and refuse.

Four long, shadowy hallways of varying widths are separated by thick walls and square pilasters supporting the more recent basilica above. Here and there wide-eyed Byzantine figures peer out from the crumbling frescoed walls. The visitor is, in fact, looking at the nave, narthex, and north and south aisles of the early Christian church, with a modern altar on the spot of the ancient presbytery.

With Constantine’s victory and the Edict of Milan in 313 the Christian Church in Rome could expand confidently. In the pontificate of Pope Siricius (384-99) the clergy attached to the small titular church of the Clemens family acquired the adjoining apartment complexes. They filled in the rooms and courtyards, constructed a central nave over the large area of early Christian worship, and extended an apse over the former Mithraic temple. The new church, mentioned by St. Jerome as early as 392, was dedicated to Pope St. Clement, a contemporary of the Roman Consul Clemens.

As the centuries passed S. Clemente became one of Rome’s best loved and most adorned churches. In the sixth century, Justinian’s wife, the Byzantine Empress Theodora (d. 548) had her portrait painted in a niche in the north aisle. (In the ninth century a throne and infant were added, converting the portrait into a Madonna and Child.)

In the eleventh century large areas of the city were laid to waste by the Normans under Robert Guiscard, and many churches were burned to the ground. S. Clemente may have been among these. At any rate, several years later the gutted rooms were filled with rubble to provide foundations for a new building, and the original structure lay utterly forgotten for eight centuries.

Now, wandering through the rows of squat supports for the basilica above, we can imagine the wonder that Father Joseph Mullooly, S. Clemente’s Irish Dominican Prior, must have felt in 1857. Acting on intuition, and armed with little more than pick and shovel, he broke through tons of rubble to discover the abandoned fourth-century church below – and eventually the Roman house church and Mithraeum as well. Mullooly found many long-forgotten treasures: a Roman pagan sarcophagus later used for Christian burial, the tomb of the ninth-century Slav missionary St. Cyril, and some charming frescoes depicting the life of St. Clement, as well as the Byzantine mosaics of the ninth century.