(Photo: The Calling of St. Matthew painted by Caravaggio, Church of Saint Louis of the French, Rome, Italy)

“Jesus therefore sees the tax collector, and since he sees by having mercy and by choosing, he says to him, “follow me.”-Homily by Saint Bede

As explained in an article in 2015 written by Servants of the Lord and the Virgin of Matara: The phrase, (having mercy and choosing) is hard to translate since it penetrates the manner in which Christ looked at St. Matthew…a two-step condition for calling him: “having mercy” and “choosing”. Yet it also captures a truth of every vocation, the fact that the call is always the Lord’s complete initiative and that no one merits the vocation. Rather every vocation is a divine work of mercy reflecting our reality before God, and His love despite our sinfulness. [2]

In 1953, on the feast of Saint Matthew, another man was called to follow Jesus.  The young Jorge Bergoglio (Pope Francis), at the age of 17, experienced, in a very special and intimate way, the loving presence of God in his life. He went to confession and felt his heart touched by the mercy of God. It changed his life. At that moment, he also felt God’s call to the priesthood and religious life as a Jesuit.  In memory of that holy event in his life, Pope Francis chose as his episcopal (and later papal) motto the words miserando atque eligendo (“having mercy and choosing”).

In an interview, Pope Francis spoke of that event in these words: “In that confession, something very rare happened to me. I don’t know what it was, but it changed my life. I would say that I was caught with my guard down… It was a surprise, the astonishment of an encounter. I realized that God was waiting for me. From that moment, for me, God has been the one who precedes (to guide me)… We want to meet Him, but He meets us first.”[1] 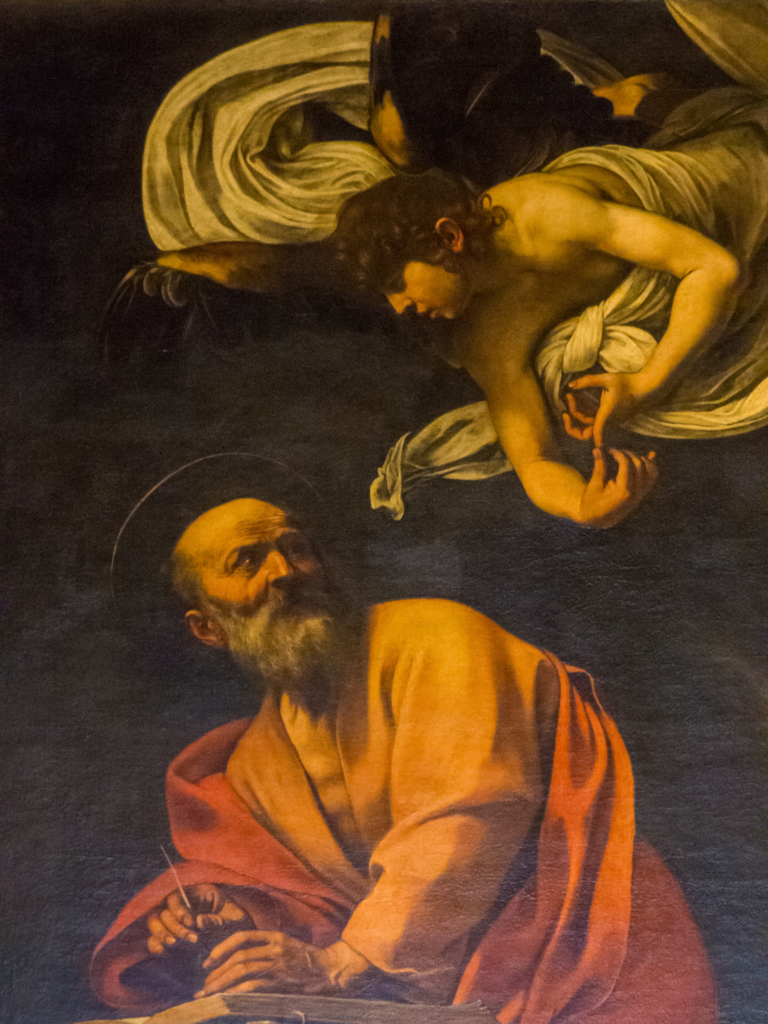 (Photo: The Inspiration of  St. Matthew, painting by Caravaggio, Church of Saint Louis of the French, Rome, Italy)

After his election as Pope, he held the Year of Mercy as mercy was to be the central theme of his pontificate. In 2016, in an ongoing series of Wednesday catechesis on mercy, Pope Francis spoke about the calling of St. Matthew and had this to say,

Jesus not only invites a tax-collector, a public sinner, to be his disciple, but also sits at table with him, thus scandalizing the Pharisees.  The Lord then explains that he has come to call not the righteous but sinners. The calling of Matthew reminds us that when Christ makes us  his disciples, he does not look to our past but to the future. We need but respond to his call with a humble and sincere heart. Jesus invites us to sit with him at the table of the Eucharist, in which he purifies us by the power of his word and by the sacrament unites us ever more deeply to himself. Citing the prophet Hosea, he tells us that what God desires is “mercy, not sacrifice”, true conversion of heart and not merely formal acts of religion. May all of us, acknowledging our sins, respond more generously to the Lord’s invitation to sit at table with him, and with one another, with immense gratitude for his infinite mercy and saving love. [3]

In his first book published as Pope, and in conjunction with the Extraordinary Jubilee of Mercy, Pope Francis here invites all humanity to an intimate and personal dialogue on the subject closest to his heart—mercy—which has long been the cornerstone of his faith and is now the central teaching of his papacy.

In this conversation with Vatican reporter Andrea Tornielli, Francis explains—through memories from his youth and moving anecdotes from his experiences as a pastor—why “mercy is the first attribute of God.” God “does not want anyone to be lost. His mercy is infinitely greater than our sins,” he writes. As well, the Church cannot close the door on anyone, Francis asserts—on the contrary, its duty is to go out into the world to find its way into the consciousness of people so that they can assume responsibility for, and move away from, the bad things they have done.

The first Jesuit and the first South American to be elected Bishop of Rome, Pope Francis has traveled around the world spreading God’s message of mercy to the largest crowds in papal history. Clear and profound, The Name of God Is Mercy resonates with this desire to reach all those who are looking for meaning in life, a road to peace and reconciliation, and the healing of physical and spiritual wounds. It is being published in more than eighty countries around the world.

“The name of God is mercy. There are no situations we cannot get out of, we are not condemned to sink into quicksand.”—Pope Francis [4] 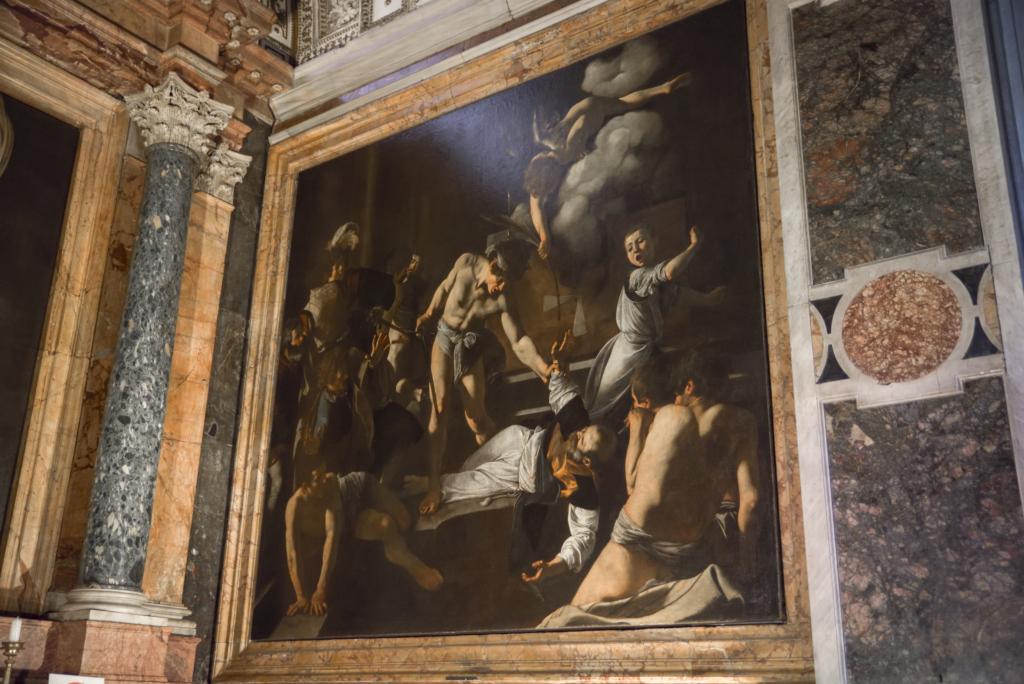 (Photo:  The Martyrdom of St. Matthew, painting by Caravaggio, Church of Saint Louis of the French, Rome, Italy

Whenever the Pope returns to Rome he goes to the church of San Luis die Francese or Church of Saint Louis of the French, and stands in front of a series of Caravaggio paintings depicting three important moments in the life of St. Matthew, The Calling of  St. Matthew, The Inspiration of St. Matthew and The Martyrdom of St. Matthew.  During our October pilgrimage in Italy, Women  Saints Through the Centuries, we will visit this church and view the paintings and perhaps contemplate our own calling to follow Christ and the vocations we have either chosen or are still discerning.

The relics of St. Matthew are believe to be buried in the crypt at the Salerno Cathedral in Southern Italy. 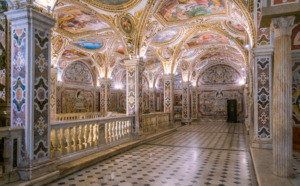 Click HERE for more information about our Women Saints Through the Centuries Pilgrimage or click HERE to view all our upcoming pilgrimages!