(Photo above: Flight to Egypt fresco in Basilica di Sant Agostino)
The Church dedicates the month of September to Our Lady of Sorrows. This devotion recalls the Blessed Virgin Mary’s spiritual martyrdom in virtue of her perfect union with the Passion of Christ.  This was her role in salvation history, and what merited her place as the spiritual Mother of all Christians. The Seven Sorrows of Mary are a popular Roman Catholic devotion. In common religious Catholic imagery, the Virgin Mary is portrayed in a sorrowful and lacrimating (secretion of tears) affect, with seven long knives or daggers piercing her heart, often bleeding. Devotional prayers that consist of meditation began to elaborate on her Seven Sorrows based on the prophecy of Simeon. Common examples of piety under this title are Servite rosary, or the Chaplet of the Seven Sorrows of Our Lady and the Seven Joys of Mary and more recently, “Sorrowful and Immaculate Heart of Mary”. 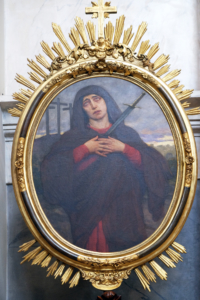 The Seven Sorrows are events in the life of the Blessed Virgin Mary that are a popular devotion and are frequently depicted in art.  They should not be confused with the five Sorrowful Mysteries of the Rosary.

It is a common practice for Catholics to say daily one Our Father and seven Hail Marys for each.

The Feast of Our Lady of Sorrows (celebrated on September 15) grew in popularity in the 12th century, although under various titles. Some writings would place its roots in the eleventh century, especially among the Benedictine monks. The first altar to the Mater Dolorosa was set up in 1221 at the Cistercian monastery of Schonau. 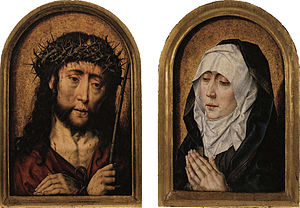 There are also the corresponding Seven Joys of Mary celebrated within the octave of the feast of her Immaculate Heart. The Seven Joys of Our Lady are:

(follow link to Wikipedia for the history of this Diptych) 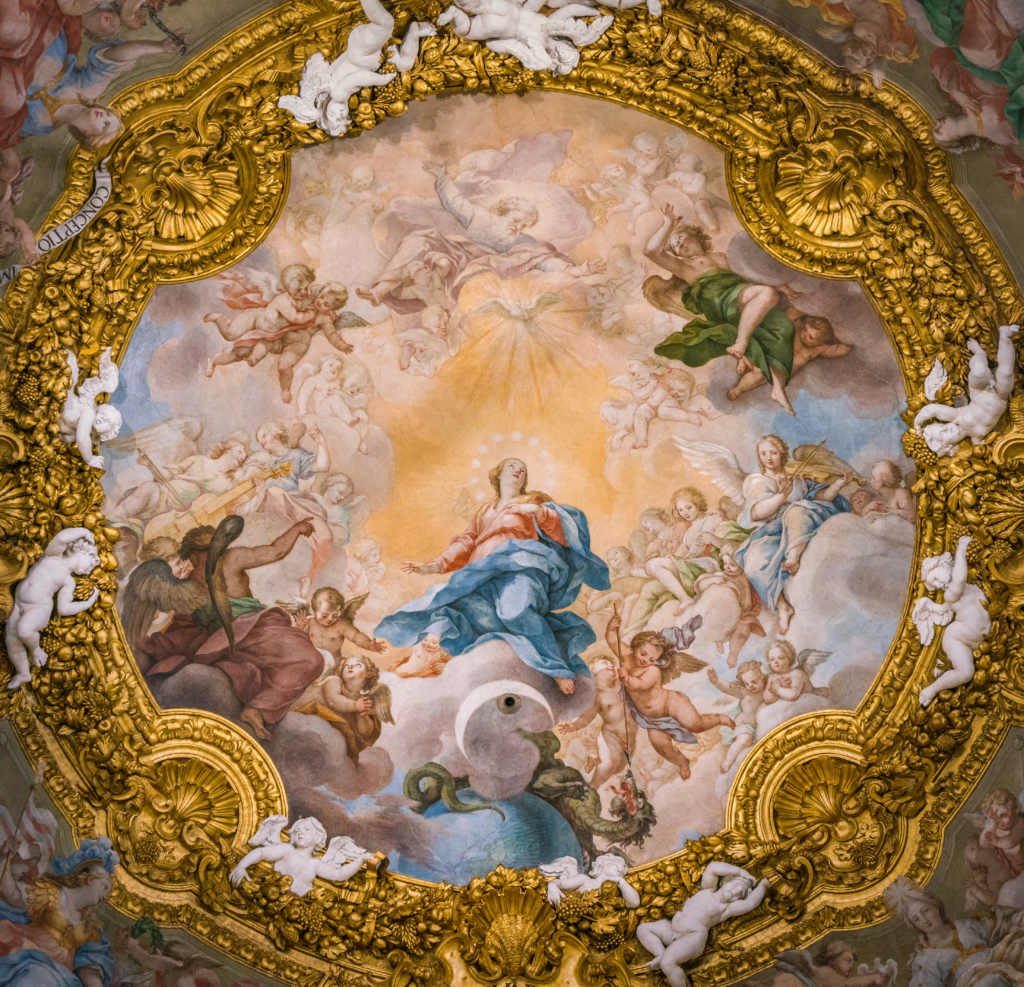 (Photo above of the fresco of Assumption of Mary, Church of Santa Maria dell’Orto, Rome, Italy)

The feast of The Seven Joys of Our Lady is a very special feast of the Franciscan Order and they recite in its honor the Franciscan Crown, which consists of a seven-decade rosary — seven Our Fathers and seventy Hail Marys, to which are added two Hail Marys because Our Lady was seventy-two when she died and was assumed into Heaven.

Another beautiful but lesser known practice is a corresponding devotion that ponders the seven powerful moments in St. Joseph’s life.

The origin of the practice of meditating on St. Joseph’s Seven Joys and Sorrows comes from a miraculous event involving two Franciscan Fathers:

“Two Fathers of the Franciscan order were sailing along the coast of Flanders, when a terrible tempest arose, which sank the vessel, with its three hundred passengers. The two Fathers had sufficient presence of mind to seize hold of a plank, upon which they were tossed to and fro upon the waves, for three days and nights. In their danger and affliction, their whole recourse was to St. Joseph, begging his assistance in their sad condition.

The Saint, thus invoked, appeared in the habit of a young man of beautiful features, encouraged them to confide in his assistance, and, as their pilot, conducted them into a safe harbor. They, desirous to know who their benefactor was asked his name, that they might gratefully acknowledge so great a blessing and favor. He told them he was St. Joseph, and advised them daily to recite the Our Father and Hail Mary seven times, in memory of his seven dolors or griefs, and of his seven joys, and then disappeared.”

Joseph’s seven joys and sorrows, which come from Sacred Scripture, dive into the hidden details, emotions, and actions of his silent Gospel presence.

It is traditional to pray an Our Father, Hail Mary, and Glory Be after reflecting on each of the seven moments. 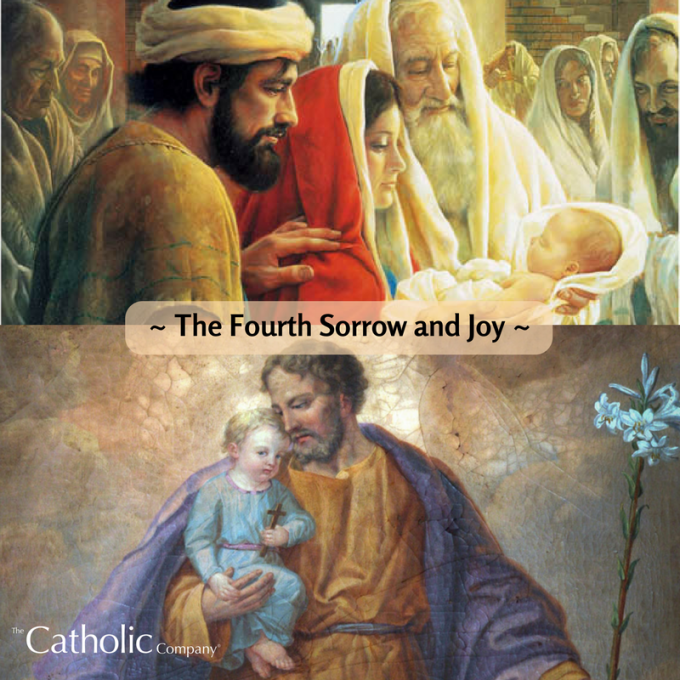 5.  The burden of being told to flee to Egypt to escape Herod’s massacre of the Bethlehem infants, and the honor of bringing the Living God to crush the Egyptian idols.

6. The fear of Archelaus in Judea when returning from Egypt, and the wonder of seeing Moses’s prophesy fulfilled when the angel directs the Holy Family to Nazareth.

7. The terror of losing Jesus in Jerusalem for three days, and the relief of finding Him in the Temple.

One of the most striking aspects of these devotions is the fact that each event begins as a sorrow, and then transforms into a joy. With the help of grace, (and sometimes a message from an angel!) perplexity turns to awe, worry to wonder, and fear to peace.  Much is the same in our lives.  Pilgrimaging to sacred sites, encountering the “living stones of faith” or just taking time for spiritual contemplation and prayer seeking Christ can aid us in transforming our own sufferings to joys.

In development now is a pilgrimage following the Holy Family’s flight to Egypt that includes a visit to a coptic church that is the site of a Marian Apparition.

CLICK HERE for a listing of our upcoming pilgrimages or CLICK HERE to contact us with interest in the  pilgrimage following the Holy Family’s flight to Egypt.

Sources for this blog posting: