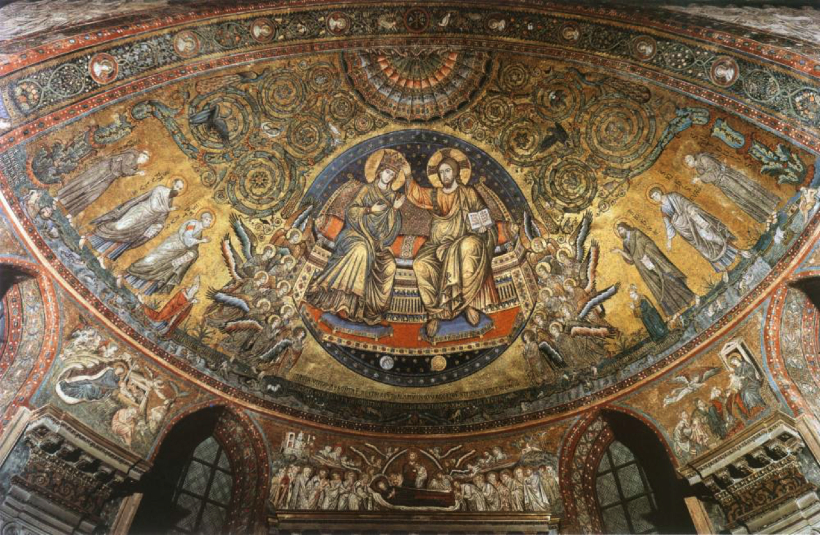 apse mosaic in the Basilica of St. Mary Major

One of the first things you may notice is that this apse mosaic, like all other apse mosaics, has the golden background signifying heaven.  In the heavens, there are the plant and animals of the heavenly Eden as well as the saints.  The garden pattern in this mosaic is reminiscent of the dome fresco in San Clemente.  It has the same swirling plant pattern with the animals.  Instead of having the cross at the center as the one tree from which all others come, the center is filled with the throne of Jesus.

The garden surrounds the throne above and the saints and angels surround the throne on the bottom.  Depicted here in the mosaic, we have on the left St. Francis of Assisi, St. Paul, St. Peter, and a tiny Pope Sixtus III.  Sixtus III is shown here since he was the Pope at the time the mosaic was made.  Then, on the other side heading inwards, we have St. Anthony of Padua, St. John the Evangelist, St. John the Baptist, and another tiny person who is the Cardinal who paid for the mosaic.

Where the throne sits, you will notice, is not on the golden background.  It sits in a blue circle filled with stars and a tiny sun and moon hid underneath.  This blue area with stars is meant as a falling away of the wall and an opening to the universe, because God is not only the King of Heaven.  He rules the whole universe.

The action at the center of the whole mosaic is the Coronation of Mary, Queen of Heaven.  Jesus is crowning Mary and sharing his throne with her.  This shows that even though Mary is not equal to God (Jesus gives her the crown), her place is still unique and close to God (she sits on his throne).

Resources: our Virtual Pilgrimage to the Basilica of St. Mary Major (watch on YouTube here)