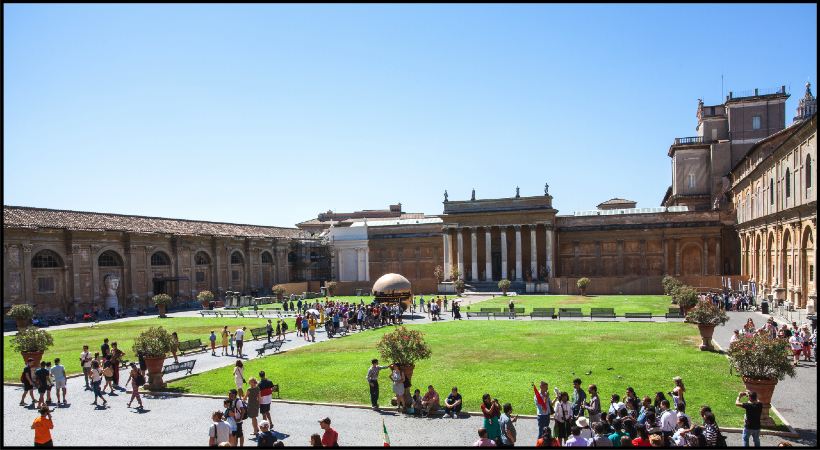 photo of the Pinecone Courtyard

The Pinecone Courtyard, or the Cortile della Pigna, was the center of the museums when Raphael lived there.  During Raphael’s time, around 15th or 16th century, many artists lodged with the Pope as long as they were patronized by the Pope. At this time, the courtyard itself was part of the Papal Palace, which Pope Nicolas II started construction in 1277.  Following Nicolas II’s reign, subsequent Popes continued to add to what is now the Vatican Museums from their own personal funds.  They were able to do this because the majority of them were nobles.  These Popes hired artists and made excavations in Rome to find more Classical artifacts. 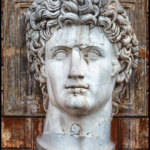 When Raphael and Michelangelo were working for the Pope, the Cortile della Pigna was filled with statues from excavations and commissions.  Among them was the gigantic Face of Augustus statue (photo left), which is the head piece of a giant statue.  The statue itself was of Caesar Augustus, who was the successor of Julius Caesar.  Why is this giant head of Caesar Augustus being displayed in the Vatican Museum today?  Because under Augustus, the Roman Empire had their Pax Augustus, or Golden Era.  This was the era in which the first Christmas happened and Christianity spread.  This Pax Augustus allowed people to think about the afterlife.  It also meant that it was safe to travel throughout the Empire, which effectively brought about the spread of Christianity. 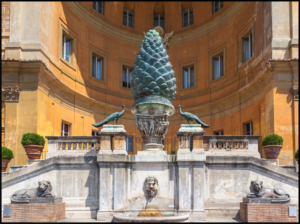 photo of the Pinecone

Stepping back and looking at the Pinecone Courtyard, one may wonder, “Why is it called the Pinecone Courtyard?”  This courtyard is named for the large pinecone statue at one end of the yard (photo right).  This statue was once a fountain, so all the “petals” or “scales” have holes for water. This pinecone is important because the cone itself, as well as the peacocks that adorn it, are symbols of eternal life.  The lions at the base of the structure are Egyptian.  They are the remnants of the first Egyptian museum in the world, which was owned by the Pope.  The Papal collection was downsized when Napoleon sacked Rome.

Resources: the second part of our Virtual Pilgrimage to the Vatican Museums (watch on YouTube here)