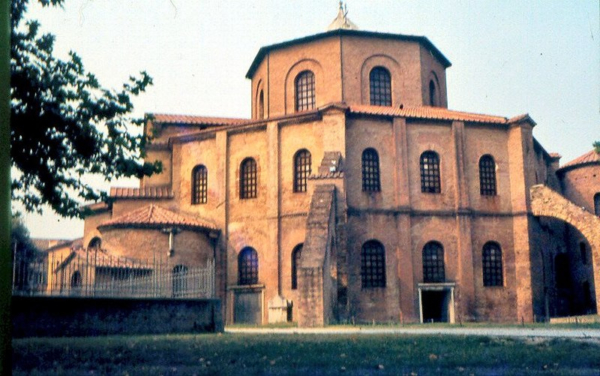 Ravenna – Ravenna made an impact as a city as far back as the first century.  Its perfect location was invaluable to the Romans–it had a seaport and was easily accessible from Rome.  The Emperor Tiberius established naval bases here in AD 23, to be able to launch military campaigns and control the Adriatic.  Later, under Emperor Claudius, the grand Porta Aurea was constructed in his honor.  Also during Claudius’s reign, Christianity came to Ravenna through the ministry of St. Apollinare.  People arrived from the east and stayed in Ravenna, and many passed through on traditional trade routes.

From the beginning of the fifth century, Ravenna became the capital of the Western Roman Empire, establishing itself as a place of wisdom, law, dogma, art, and cultural interchange.  Ravenna survived many wars and invasions and remained the intersection point between Byzantium and the West up to the seventh century.

Much more recently, in June 2002, this meeting of East and West was further enforced by the visit of Bartholomew I (ecumenical patriarch of Constantinople) who officiated at a divine liturgy in St. Apollinare in Classe.  This signified closer ties between the Eastern Orthodox Church and the Holy See of Rome. (Vardey, 221-222).

Vitale is usually portrayed in the mosaics as a young soldier (because of his intercession in defending Ravenna after his death), although what we know of him in life is that he was a servant of a rich man.  Born in the fourth century, he worked for a prominent citizen from Bologna called Agricola.  A confirmed Christian, Vitale was advised by many of his friends to denounce Christ, but he was firmly resolved in his faith, so much so that he was tortured and crucified in the presence of his employer.  Agricola was so overcome by the faith and courage of Vitale that he, too, converted to Christianity and went to his death in the same way.  Both men were buried in a Jewish cemetery, which has led historians to believe that they were Jewish because capital punishment for a Roman citizen was decapitation, not crucifixion.

Vitale’s feast day is April 28, and though considered a Roman martyr, he became particularly connected with Ravenna in the fifth century due to a noblewoman called Galla Placidia.  Daughter of Theodosio the Great, Galla represented her imperial family and moved to Ravenna from Constantinople in AD 409.  she lived there for twenty-five years, bringing with her peace and religious devotion.  She gained permission from Ambrose, bishop of Milan, to have relics of St. Vitale’s remains brought to Ravenna from their original burial place in Bologna.  As a result, popular devotion to St. Vitale grew among the Ravenna townsfolk, who buitl the famous basilica that bears his name.