St. Bonaventure and a California Mission…. 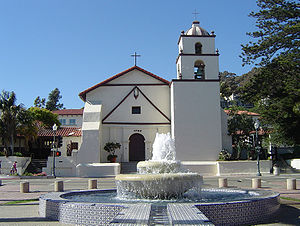 Photo left is of San Buenaventura Mission, a  Spanish Mission located in Ventura, California.  It is the ninth and last mission established by St. Junipera  Serra, a Franciscan priest whose missionary work and life is the theme of our California Missions Pilgrimage as discussed in a prior blog post [Click HERE to read about St. Junipera Serra]

This mission was named for St. Bonaventure, another Franciscan priest and Doctor of the Church, whose feast day is today. FranciscanMedia [Click this LINK to read more on their website] describes his life as follows:

Perhaps not a household name for most people, Saint Bonaventure, nevertheless, played an important role in both the medieval Church and the history of the Franciscan Order. A senior faculty member at the University of Paris, Saint Bonaventure certainly captured the hearts of his students through his academic skills and insights. But more importantly, he captured their hearts through his Franciscan love for Jesus and the Church. Like his model, Saint Francis, Jesus was the center of everything—his teaching, his administration, his writing, and his life. So much so, that he was given the title “Seraphic Doctor.”

Born in Bagnorea in 1221, Saint Bonaventure was baptized John, but received the name Bonaventure when he became a Franciscan at the age of 22. Little is known about his childhood, but we do know that his parents were Giovanni di Fidanza and Maria Ritell. It seems that his father was a physician and a man of means. While Saint Francis died about five years after the saint’s birth, he is credited with healing Bonaventure as a boy of a serious illness.

Saint Bonaventure’s teaching career came to a halt when the Friars elected him to serve as their General Minister. His 17 years of service were not easy as the Order was embroiled in conflicts over the interpretation of poverty. Some friars even ended up in heresy saying that St. Francis and his community were inaugurating the era of the Holy Spirit which was to replace Jesus, the Church, and Scripture. But because he was a man of prayer and a good administrator, Saint Bonaventure managed to structure the Order through effective legislation. But more importantly, he offered the Friars an organized spirituality based on the vision and insights of Saint Francis. Always a Franciscan at heart and a mystical writer, Bonaventure managed to unite the pastoral, practical aspects of life with the doctrines of the Church. Thus, there is a noticeable warmth to his teachings and writings that make him very appealing. 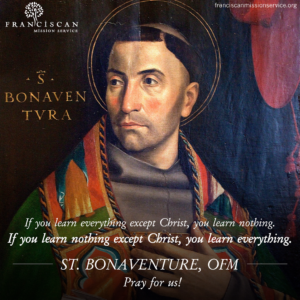 Shortly before he ended his service as General Minister, Pope Gregory X created him a Cardinal and appointed him bishop of Albano. But a little over a year later, while participating in the Second Council of Lyon, Saint Bonaventure suddenly died on July 15, 1274. There is a theory that he was poisoned.

Saint Bonaventure left behind a structured and renewed Franciscan Order and a body of work all of which glorifies his major love—Jesus.

A more detailed and extensive chronology of his life can be found at NewAdvent Catholic Encyclopedia. Click HERE to read more.

Explore the mission named for him and it’s unique history while pilgrimaging with us through California next March!  Click HERE for more information about the California Missions pilgrimage.