Saint Simon Stock was born to a very illustrious family in Kent County, England (c. 1165), of which his father was governor. His mother was devoted to the Virgin Mary, and Simon was not yet one year old when he was heard clearly articulating the Angelic salutation several times. When he was twelve, Simon began to live as a hermit in the hollow of a trunk of an oak, where he got the nickname “stock” or “trunk”. Within this wilderness retreat, his continual prayers ascended to heaven and he spent twenty years in the most complete solitude, feeding his soul with the celestial delights of contemplation.

Having voluntarily chosen to deprive himself of human conversation, he was favoured with that of the Blessed Virgin Mary and the angels who urged him to persevere in his life of sacrifice and love. The Queen of Heaven told him that some hermits from Palestine would soon land in England, adding that he should join those men whom she considered as her servants.

Indeed, Lord John Vesoy and Lord Richard Gray of Codnor returned from the Holy Land, bringing with them several hermits from Mount Carmel. Simon Stock joined them in 1212 and was elected Vicar General of the Carmelite Order in 1215. He begged the Virgin Mary by fervent prayers and tears to defend this Order, which was devoted to her, and she appeared in a dream to Pope Honorius III, so the pope finally confirmed the Rule of Carmelites in 1226.

Another time the Mother of God appeared to Simon, surrounded by a dazzling light and accompanied by a large number of blessed spirits, with the scapular of the order in her hand. This scapular she gave him with the words: “Hoc erit tibi et cunctis Carmelitis privilegium, in hoc habitu moriens salvabitur” – This shall be the privilege for you and for all the Carmelites, that anyone wearing this habit shall be saved.

Through Saint Simon Stock the devotion of the scapular spread throughout the world, not only among the people, but also among kings and princes who found themselves very honoured to wear the sign of the servants of the Blessed Virgin. Stock breathed his last in the city of Bordeaux while visiting monasteries, in the 20th year of his office as Vicar General. The Church added his last words to the Angelic salutation: “Holy Mary, Mother of God, pray for us sinners now and at the hour of our death.”

MARY’S PROMISE TO THOSE WHO WEAR THE SCAPULAR

Our Lady gave St. Simon a scapular for the Carmelites with the following promise, saying : Receive, My beloved son, this habit of thy order: this shall be to thee and to all Carmelites a privilege, that whosoever dies clothed in this shall never suffer eternal fire …. It shall be a sign of salvation, a protection in danger, and a pledge of peace.

Another important aspect of wearing the Scapular is the Sabbatine Privilege. This concerns a promise made by Our Lady to Pope John XXII. In a papal letter he issued, he recounted a vision that he had had. He stated that the Blessed Virgin had said to him in this vision, concerning those who wear the Brown Scapular: “I, the Mother of Grace, shall descend on the Saturday after their death and whomsoever I shall find in Purgatory, I shall free, so that I may lead them to the holy mountain of life everlasting.”

CONDITIONS AND RITUALS ATTACHED TO THE SCAPULAR

According to Church tradition, there are three conditions necessary to participate in this Privilege and share in the other spiritual benefits of the Scapular: wear the Brown Scapular, observe chastity according to your state in life, and pray the Rosary. In addition to the Sabbatine Privilege, enrollment in the Brown Scapular also makes a person part of the Carmelite family throughout the world. They therefore share in all of the prayers and good works of the Carmelite Orders. Participation in the Carmelite family also, of course, places you in a special relationship with the Carmelite saints, especially St. Elijah, St. Teresa of Avila, St. John of the Cross, St. Therese of Lisieux, and, most importantly, Our Lady of Mount Carmel.

VALUE AND MEANING OF THE SCAPULAR

Many popes and saints have strongly recommended wearing, the Brown Scapular to the Catholic Faithful, including St. Robert Bellarmine, Pope John XXII, Pope Pius Xl, and Pope Benedict XV. For example, St. Alphonsus said: “Just as men take pride in having others wear their livery, so the Most Holy Mary is pleased when Her servants wear Her Scapular as a mark that they have dedicated themselves to Her service, and are members of the Family of the Mother of God.”

Pope Pius XII went so far as to say: “The Scapular is a practice of piety which by its very simplicity is suited to everyone, and has spread widely among the faithful of Christ to their spiritual profit.” In our own times, Pope Paul VI said: “Let the faithful hold in high esteem the practices and devotions to the Blessed Virgin … the Rosary and the Scapular of Carmel” and in another place referred to the Scapular as: “so highly recommended by our illustrious predecessors.”

A modern day look at the Brown Scapular was written about by a Carmelite sister , Sr. Helena, at the blog, Mount Carmel, on July 20, 2018:

The Brown Scapular is a miniature form of the habit worn by Carmelites. The significance of the Scapular to Carmelites is very much tied up to the place of Mary in the Order. It summarizes Marian devotions and piety. The Scapular does not have any value or meaning, if it is not contemplated in relation to Mary. This is because this sacramental of the Church came to us through the initiative of Mary. To understand Mary’s role and place in our modern day existence is to understand well the significance of the Brown Scapular of Carmel in our lives and the world. 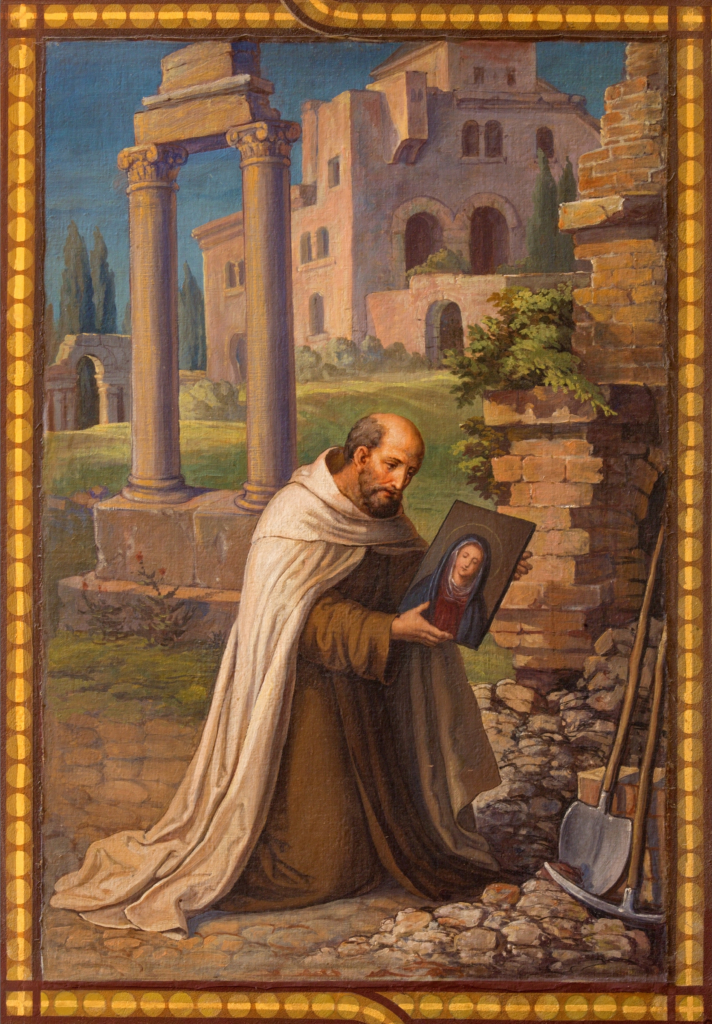 What does this tiny, brown piece of cloth, have anything to do with our Christian life?

The Brown Scapular embodies Mary’s spirit. In our world of noise and frenzied activities, the Scapular invites us to remember our origin and roots as Carmelites. Anyone who wears the Brown Scapular implicitly ties him or herself to the spirit and life of Carmel. We should remember that we were founded in the caves of Mount Carmel, in the spirit of Elias, to contemplate God “in whose presence we stand.” The Brown Scapular calls us to silence and contemplation and intimacy with God. This intimacy must be sought not just by the “contemplatives” of the Order but by anyone who wears the Carmelite scapular.

In our world of consumerism and materialism, the Brown Scapular reminds us of the simplicity of Mary in Nazareth, content with what God had to offer. The simple brown cloth worn as an apron should remind us of the Gospel call to service and humility. At the Last Supper, our Lord put on an apron and began to wash the apostles feet. It should be a constant reminder to us of an interior disposition to make ourselves available in any way we are called upon to serve. The brown color of the Scapular reminds us of earth from which we were formed in creation and a reminder that it is through our frail humanity that we ascend to God. The Scapular, which is worn over the shoulder, is a “yoke” that we put on. Once we put on this yoke, we freely commit ourselves to a “way of life” that will lead us to the mountain of Carmel which is Christ. I emphasize “way of life” because the Brown Scapular should signify a life- changing commitment. We try to re-orient our life and gear it to the Gospel ideals embodied by the Scapular, daily, and with determination. It is not just the act of wearing it but a firmness of purpose to live out the challenge. It is entering into a covenant.

The Brown Scapular, being totally Marian, symbolizes the virtue of chastity. We are “clothed in the habit of our Lady”, as St. Teresa of Avila loved to remind her nuns. How can we worthily wear the Scapular of Mary Most Pure, if we don’t shun impurity in all shapes and forms? In this modern culture glamorizing sex and the idolatrous worship of the body, we have the work cut out for us. We do not mean to be prudish here since we acknowledge the fact that we are not angels but endowed with a human body, with all of its normal operations, desires and processes. But the virtue of chastity is first of all born in the will. “It is not what enters a man’s heart from the outside which renders him impure, but rather what comes out of him,” as Jesus wisely stated. We must try to shun occasions against the virtue of chastity but it may happen that a situation beyond our control presents itself. We must simply turn our heart away from it and invoke Mary’s help to keep us pleasing to God, and remain at peace. Temptations against chastity are often better dealt with flight than fight. It is not worth our time fighting it in its face but to simply ignore it and to elevate our intentions to a higher level.

In our modern age, there is a growing fascination with different schools of spirituality. More and more people show a growing thirst for spiritual things. I believe that there is a richness to be re-discovered in the Brown Scapular. There is a growing awareness , even within the Order, of the great treasure we have in the Scapular of Our Lady of Mount Carmel. A final document pertaining to this topic was published by the Order. This document is named “The Official Teaching of the Church and of Carmel on the Scapular Devotion.” This document was released by the Congregation for Worship in Rome and was published in “Carmel in the World,” a publication of the Order.

And lastly, the Brown Scapular is a constant reminder to us of our heavenly Mother’s companionship and attentiveness to our needs. She is the Mother for all generations. She is the one who comes to our aid in times of trouble. She did it to Saint Simon Stock over 750 years ago and she still does it to you and me in our day. [2]

We visit Aylesford, England, where St. Simon Stock received the Brown Scapular from Our Lady during the pilgrimage, Mary’s Dowry. The next pilgrimage is planned for August 2020.  Follow the link below for information about this and our other pilgrimages.