Photo above: aeriel view of Monastery of Montserrat (home of Black Madonna) in Catalonia, Spain. Panoramic view from the top of the mountain. 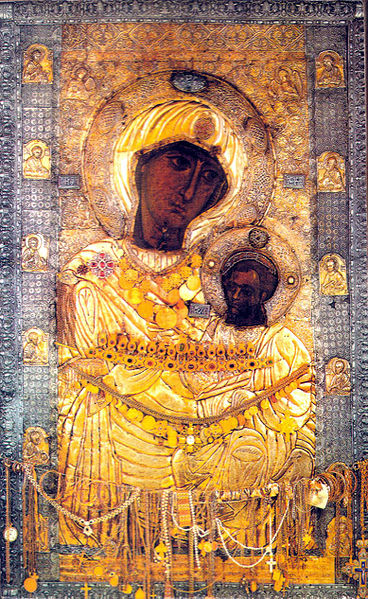 In 963, St. Athanasius, the Athonite, establishes a monastery dedicated to the Mother of God on Mt. Athos peninsula in Greece.  Here the original Icon to Our Lady of Iveron  (photo, left) hangs over the monastery gates. The icon is believed to have been painted by St. Luke and belongs to a family of images of the Theotokos known as Hodegetria  (Greek: Όδηγήτρια, “she who leads the way”) after the prototype from Constantinople. In these icons, the  Christ Child sits on his mother’s left arm and she is depicted pointing to Christ with her right hand.

A unique characteristic of this icon is what appears to be a scar on the Virgin Mary’s right cheek or her chin. A number of different traditions exist to explain this, but the one most commonly held by Orthodox Christians is that the icon was stabbed by a soldier in Nicaea during the period of  Byzantine iconoclasm under the Emporer Theophilus  (829–842). According to tradition, when the icon was stabbed, blood miraculously flowed out of the wound.

The original in Iveron is encased in a chased riza of silver and gold covering almost all the image except the face, as is common with the most venerated icons.

According to the Orthodox Church’s Sacred Tradition the icon was at one time in the possession of a widow in Nicaea. Not wanting the icon to be seized and destroyed by the iconoclasts, she spent all night in prayer and then cast the icon into the Mediterranean Sea. The widow’s son later went to Mount Athos, where he became a monk and recounted the miracle of the bleeding wound, and how the icon had been placed in the sea. Much later (c. 1004) the icon was recovered from the sea by a Georgian monk named Gabriel (later canonized a saint in the Orthodox Church), who was laboring at the Iveron Monastery on Mount Athos. This occurred on Tuesday of Bright Week (Easter Week), and is commemorated annually on that day (as well as the fixed date of March 31). The icon was taken to the katholikon (main church) of the monastery from which the icon gets its name.

The tradition goes on to say that the following day, when the monks entered the church they could not find the icon. After searching they discovered the icon hanging on the gates of the monastery. This occurrence was repeated several times, until St. Gabriel reported that he had seen a vision of the Theotokos, wherein she revealed that she did not want her icon to be guarded by the monks, but rather she intended to be their Protectress. After this, the icon was permanently installed above the monastery gates, where it remains to this day. Because of this, the icon came to be called Portaitissa or “Gate-Keeper”. This title was not new for the Virgin Mary, but comes from a verse of the Akathist to the Mother of God: “Rejoice, O Blessed Gate-Keeper who opens the gates of Paradise to the righteous.” Orthodox monks and nuns throughout the world will often place an icon of the Theotokos Iverskaya on the monastery gates. It is also common in Orthodox temples (church buildings) to place an icon of the Theotokos Portaitissa on the inside of the iconostasis above the Holy Doors, looking towards the Holy Table (altar table).

In 975, Montserrat Abbey (photo above) in Spain was founded which later becomes the shrine with a Black Madonna.  Montserrat, whose name means ‘serrated mountain’, is ideally located to play an important role in the cultural and spiritual life of Catalonia. It is Catalonia’s most important religious retreat and groups of young people from Barcelona and all over Catalonia make overnight hikes at least once in their lives to watch the sunrise from the heights of Montserrat. The Virgin of Montserrat is Catalonia’s favorite saint, and is located in the sanctuary of the Mare de Déu de Montserrat, next to the Benedictine monastery nestling in the towers and crags of the mountain. The Escolonia, Montserrat’s Boys’ Choir, is one of the oldest in Europe, and performs during religious ceremonies and communal prayers in the basilica.

The basilica houses a museum with works of art by many prominent painters. The Publicacions de l’Abadia de Montserrat, a publishing house, one of the oldest presses in the world still running, with its first book published in 1499. 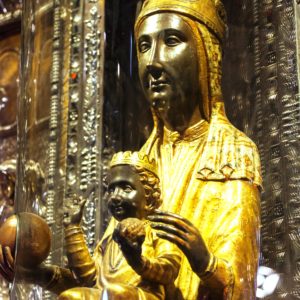 The wooden statue of the Black Madonna with Child in her arms in the Montserrat monastery, Catalonia, Spain

The image of Our Lady of Montserrat, popularly known as La Moreneta (the Dark One), due to the dark color of Her skin, is a truly beautiful 12th-century Romanesque polychrome carving. Pope Leo XIII proclaimed Our Lady of Montserrat to be Patron Saint of Catalonia in 1881. In 1947, the image was enthroned in a silver altarpiece, paid for by popular subscription and installed in the upper section of the basilica apse.  Artistically, the image imitates a popular model, that of Our Lady Majesty, with a wholly frontal attitude and Baby Jesus on Her lap in the centre. Both Mother and Child are wearing crowns. The figure of Our Lady stretches out Her right hand, which holds the globe, symbolizing the cosmos. Our Lady nearly rests Her left hand on the Child’s shoulder, indicating that this omnipotent king is Her Son. With His right hand, the Child gives a blessing, whilst His left hand holds a pinecone, symbol of fertility and everlasting life.

The first text which makes reference to the legend dates from 1239, a fact which demonstrates that Montserrat has been a holy place for many many years, due to both the presence of the Image of the Holy Mother of God and the pilgrims coming to worship it. The legend tells that in the year 880, on a Saturday night when the sun was going down over Montserrat, some boy shepherds saw a bright light coming down from the sky, accompanied by beautiful music. The following Saturday they returned with their parents. And the vision came to them again. On the following four Saturdays, the Rector of Olesa went with them. And everyone saw the vision.  The icon of a Madonna with her son sitting on her lap was eventually found in a small cave in Montserrat. Legend again tells that people tried to move it to the village, but it was so terribly heavy that the mission was impossible to accomplish. It was decided to leave the icon there and build a sanctuary to worship it. The place became a place of pilgrimage. This small sanctuary is what it’s nowadays known as the Holy Cave and is one of the highlights of the visit to Montserrat.

It is believed that the image was first known as La Jerosolimitana (the native of Jerusalem), since it was thought to have been carved there in the early days of the Church. The statue was eventually given to St. Etereo, Bishop of Barcelona, who brought it to Spain.

In the seventh century, when Saracen infidels invaded Spain, the Christians of Barcelona heroically defended it for three years until defeat appeared imminent. Knowing that they could hold out no longer, they decided to take their treasured image of Our Lady to a secret, safe place. Quietly, with the knowledge of the Bishop and the Governor of the city, a group brought the statue to Montserrat, placing it in a small cave, April 22, 718. A complete account  of the origin of the miraculous image, the cause of its removal and the place of its hidden security were recorded and  in the archives of Barcelona. Even though the location of the statue was eventually forgotten, the people of Barcelona never forgot the holy image for almost 200 years. Then, in 890, shepherd boys from Monistrol, a village at the foot of Montserrat, were sent unbeknown to them to be the source of the discovery of the treasure.