Our Lady of Fatima and Her Immaculate Heart part 6 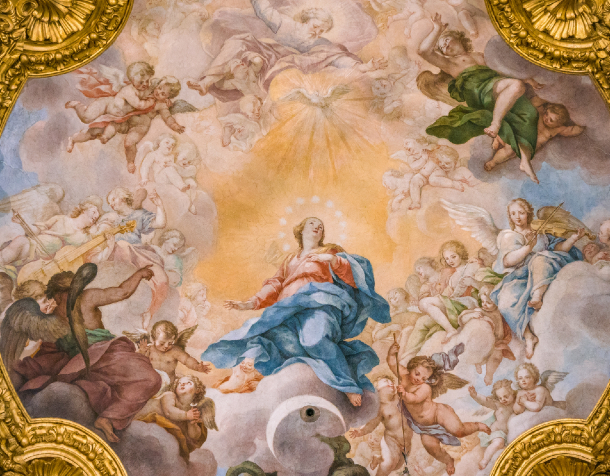 During this final major apparition at Fatima, Our Lady displayed the well-known Miracle of the Sun to the crowds.  First, she spoke to the three children and told them to build a church dedicated to her as Our Lady of the Rosary at the Cova.  She said to them, “Continue always to pray the rosary every day.”  Our Lady told them that “the war” (World War I) would end.  Our Lady implores us, “Do not offend the Lord our God any more, because He is already so much offended.”

Then she stretched out her hands and rays of light went toward the sun.  Thus began the famous miracle of the sun.  The sun now seemed to be a silver disk and the multitudes could look straight into it without shading their eyes.  Suddenly it started shooting off different colored rays in all directions and then spinning on its axis.  and then just as suddenly it seemed to be hurtling toward the earth.  The terrified onlookers dropped to their knees, convinced that the end had come and many sought forgiveness for their sins.  Just when it seemed that there would be a cataclysmic collision, the sun returned to its normal position and everything was as before.  Miraculously, drenched clothes had dried up and there was neither water nor mud to be seen anywhere.  The miracle of the sun was witnessed not just by those in the Cova but by people thirty miles away (thus ruling out the possibility of mass hysteria).  While the crowds were gazing at the solar phenomena, the visionaries were witnessing various scenes in the heavens: Jesus in a red costume blessing the crowds, then Jesus as an infant with Mary and Joseph, and finally Mary in the brown robes of Our Lady of Mount Carmel.