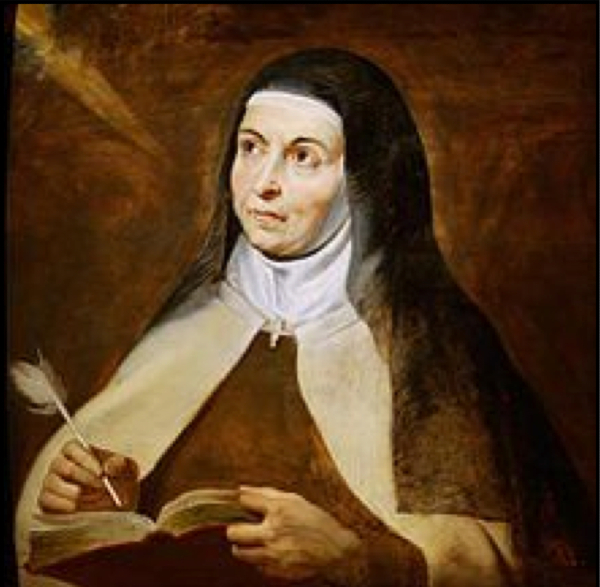 portrait of St. Teresa of Avila

St. Teresa of Avila started life as one with great desires.  She desired to proclaim the Gospels and become a martyr so much that she ran away with her brother.  The pair of children did not get far before they were caught by their uncle and brought back to Avila.  As she grew older, Teresa’s desires became more worldly.  She enjoyed pleasing the people around her and to be noticed by them.  And so, the young saint’s conversion became slow, though it remained always constant.

Our Lord made himself known to and through Teresa of Jesus in various ways.  When Teresa fell ill, having been the convent for two years, the convent could not take care of her.  So her father brought St. Teresa to her uncle’s house, where she stayed until she was well.  It is often in sickness that God draws us closer to him.  Her uncle shows her a book called The Third Spiritual Alphabet, which introduced her to the prayer of recollection.   This knowledge changed her and opened up for Teresa a deeper spiritual world within herself.

One day, her convent brought a statue of wounded Jesus into the oratory.  St. Teresa saw this statue of the Ecce Homo and was changed.  She saw our Lord with new eyes.  St. Teresa of Avila realized that these wounds were for her, for each of us.  “For love of us, He was shredded and diminished.”

Resources: our Saint of the Week Virtual Pilgrimage on St. Teresa of Avila (watch on YouTube here)