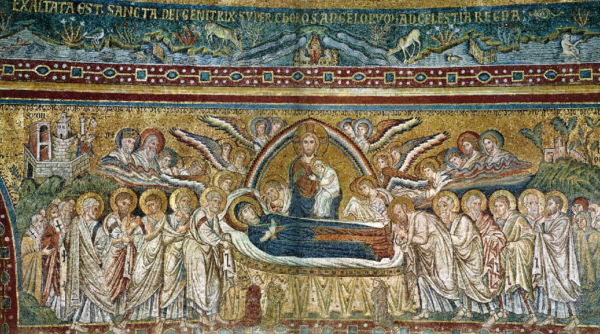 Mosaic of the Dormition of Mary

Honouring the Mother of God – San Maria Maggiore is widely believed to be the most important church dedicated to Mary in Western Christendom. This explains the basilica’s name – St. Mary Major.

A CHURCH FOR THE MOTHER OF GOD

Pope Liberius’ basilica fell into ruin and disappeared. The St. Mary Major we see today took shape in 432, when Pope Sixtus III (432–440) decided to build a new and more magnificent structure near the site of Liberius’ former Marian church.

the time was ripe for Sixtus to forcefully reaffirm the Marian cult. In the late Empire a temple to the Roman mother goddess Juno Lucina was flourishing on the Esquiline Hill and was frequented by many Roman matrons approaching childbirth. It is highly likely that a church to the Virgin Mother of God was erected to supplant the enduring pagan cult of Juno Lucina. In fact, some of St. Mary Major’s marble columns probably came from the Juno Lucina temple, which was located, according to archaeological findings, about 300 metres from the basilica’s present site.

Sixtus III had an additional incentive for the construction of his new church. In 431 the Church Council of Ephesus had condemned the Nestorian heresy, which denied the unity of the divine and human natures in the person of Christ. The Council affirmed that the person of Jesus possessed both divine and human natures, and was thus truly God and truly man. Mary, being the mother of the divine person Jesus, was also the Mother of God.

It was Sixtus’ intention, realized in a series of mosaics (Annunciation, Adoration of the Magi, Flight to Egypt, etc.) in the triumphal arch over the altar, to invite the faithful to meditate on the divinity of Christ and the Virgin’s divine motherhood. In one touching panel, Joseph looks perplexed as an angel takes him aside to explain his role in the impending Nativity.

Another series of mosaic panels around the nave architrave depicts scenes from the Old Testament, emphasizing the link between Christ’s birth and the Messianic prophecies. These are high up and very difficult to see in detail, but can be appreciated for their colouring and delicate composition.

In the Middle Ages, Nicholas IV (1288–92) replaced Sixtus III’s apsidal mosaics with an even more splendid portrayal of the Virgin in Glory. A glittering gold and gem-coloured mosaic, The Coronation of the Virgin, executed by the Franciscan friar Jacopo Torriti around 1295, became the aesthetic focal point of the entire basilica. Pope Nicholas changed Sixtus’ earlier representation of The Madonna and Child to a portrayal of the Virgin as crowned and bejewelled Byzantine bride, enthroned side by side with Christ. This Marian iconography had first made its appearance a century earlier in Santa Maria in Trastevere and coincided with the rapid spread of the Marian cult throughout twelfth- and thirteenth-century Europe.

Other mosaics in the band below recount events in the life of the Virgin (Annunciation, Nativity, Dormition, etc.). Nicholas IV and Jacopo Torriti had worked together on the apse mosaic in San Giovanni in Laterano; the Pope’s diminutive figure appears to the left, along with the equally tiny brother-Cardinals Pietro and Giacomo Colonna. The same donors, whose munificence must have been extensive and sustained, are also portrayed in somewhat later ‘loggia mosaics’.

We will be going to visit the Basilica of St. Mary Major in our upcoming Journey Toward the Face of Christ pilgrimage this coming May/June 2022.