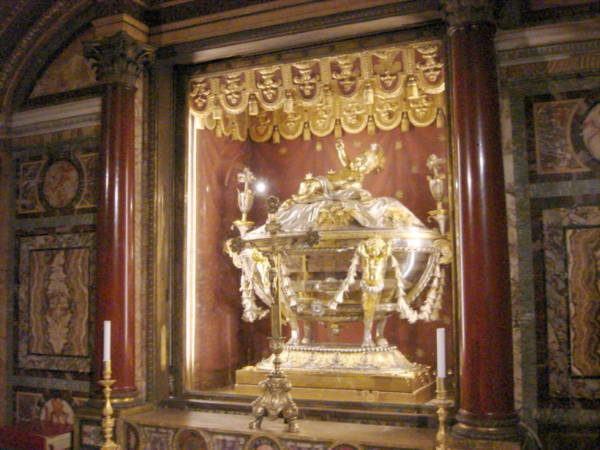 Image of the reliquary of the Presepio

Honouring the Mother of God – San Maria Maggiore is widely believed to be the most important church dedicated to Mary in Western Christendom. This explains the basilica’s name – St. Mary Major.

A precious wooden relic, believed to be part of the Sacred Crib (presepio) and allegedly brought from Bethlehem by St. Jerome in the fourth century, has been associated with St. Mary Major from early times. In fact, an oratory reproducing the Bethlehem grotto may have housed the relic from the days of Sixtus III. First documented in the reign of Pope Theodore I (642–9), the chapel stood outside the basilica and was visited by pilgrims throughout the Middle Ages. Successive Popes endowed the oratory with a golden altar, jewelled statues, and silver gates. Towards the end of the thirteenth century, Arnolfo di Cambio (1245–1303) decorated the grotto with his world-famous Nativity statues.

Unfortunately, Sixtus V decided to transfer the presepio oratory to his own newly-designed chapel inside the basilica. in the process the whole construction caved in and fell apart. The relic of the Sacred Crib, encased in a nineteenth-century reliquary, is now located under the main altar. Some of Arnolfo’s statues (the original Madonna and Child have been replaced by sixteenth-century figures) can be seen in a subterranean room inside Sixtus V’s chapel.

THE SISTINE AND PAULINE CHAPELS

The Sistine Chapel in St. Mary Major’s right transept is like a miniature church with its own large cupola, and is filled with marbles, gilded statues, and Mannerist paintings. It was commissioned by Sixtus V when he was still a Cardinal, designed by his favourite architect Domenico Fontana (1543–1607), and contains Sixtus a Cardinal, and a chapel with the remains of St. Jerome (341–420).

Across from Sixtus V’s chapel, Pope Paul V built his own to match in 1611. The chapel hosts Paul V’s tomb and that of Clement VIII (1592–1605, who made Paul a Cardinal), but the real purpose was to house a sacred icon of the Madonna and Child. All the famous artists of the day – goldworkers, architects, painters and sculptors – worked to realize the flamboyant spirit of the seventeenth century. We are overwhelmed by larger-than-life statues, contorted marble angels, and the contrasting shades of amethyst, agate and lapis lazuli.

According to a seventh-century tradition, the Madonna icon, said to have been painted by the Evangelist Luke (but dated by scholars to somewhere between the fifth and ninth centuries), was carried through the streets of Rome by Pope St. Gregory the Great in the year 594, to pray for deliverance from a terrible pestilence. When the plague miraculously ceased, the grateful Roman population gave the icon the appellation of Salus Popoli Romani (Salvation of the Roman People), and its veneration as such continues to this day.

Today St. Mary Major has an eighteenth-century facade designed and executed by Ferdinando Fuga (1699–1781) on the orders of Benedict XIV (1740–58). Fuga also gave a classical regularity and symmetry to the interior by making all of the columns uniform – paring, shortening and adding on, and providing all with Ionic bases and capitals. Even today St. Mary Major’s interior gives the impression of a classical basilica of the early Church. The ‘cosmatesque’ pavement dates from the thirteenth century.

The gold coffered ceiling over the nave was commissioned by the Borgia Pope Alexander VI (1492–1503), whose coat-of-arms is prominently displayed. Supposedly, Alexander used the first gold brought from America, a gift from Ferdinand and Isabella of Spain, as gilding for the ceiling. The Baroque artist Gianlorenzo Bernini is buried in St. Mary Major, to the right of the main altar, along with his father Pietro, who worked as a sculptor in some of the chapels. Another chapel commemorates the descendants – who are supposed to be buried here – of Pope Liberius’ first generous ‘sponsor’, the patrician Giovanni.

We will be going to visit the Basilica of St. Mary Major in our upcoming Journey Toward the Face of Christ pilgrimage this coming May/June 2022.