The Basilica of St. Paul’s Outside the Walls part 1 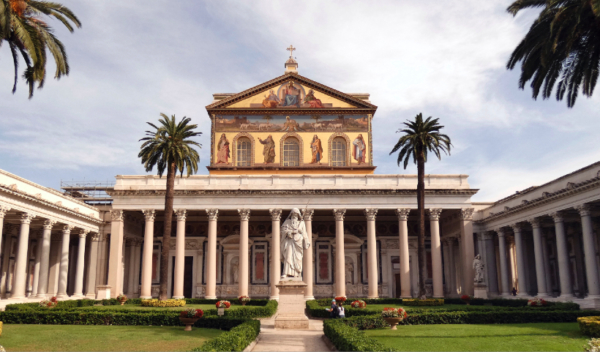 St. Paul’s Outside the Walls

A Marytyred Apostle’s Shrine – The basilica of St. Paul Outside the Walls was built over the tomb of the missionary Apostle Paul, founder – along with St. Peter – of the Roman Church. His memory has been honoured in this basilica as St. Peter’s in his – throughout two millennia of Christian history.

Two very Oriental palm trees stand in the courtyard before the basilica of St. Paul Outside the Walls. This exotic suggestion – as palm fronds in medieval mosaics evoked far-away Jerusalem – eases the pilgrim beyond the initial disappointment to a hint of the modern building’s origins in the early days of Christian martyrdom. For the basilica was originally constructed in 324, upon the express desire of the first Christian Emperor, Constantine, to commemorate the burial place of the martyred Apostle St. Paul.

We know much about Paul (Saul), a Jew born in Tarsus and trained as a Pharisee, from the Acts of the Apostles and from his own Epistles. Intense and ambitious, he first persecuted Christians with fanatic determination, and even participated in the stoning of St. Stephen in Palestine. Later, after his conversion on the road to Damascus, the new Apostle (by virtue of his personal vision of and ‘calling’ by Christ, as he himself wrote) pursued his worldwide evangelizing mission with the same boundless energy with which he had hunted down Christians. Less appealing than the fallible, lovable Peter, Paul’s tireless missionary efforts and great theological contributions nevertheless gave Christianity its universal momentum.

Paul arrived in Rome under a type of ‘house arrest’ (for his revolutionary activities), preached for about two years, and was finally executed outside the Roman walls on the Ostian Way. Since he inherited Roman citizenship from his father (the Acts do not say how or why), he was beheaded rather than crucified. Legend holds that three fountains sprang up where the Apostle’s head bounced three times as it was cut off, and the area, where a Trappist monastery now stands, has since been called the Tre Fontane (Three Fountains).

According to tradition, St. Paul was buried by the pious matron Lucina in her family vineyard-cemetery on the Ostian Way. There, from the first century, a cella memoriae (grave memorial) was venerated by early Christians and was even mentioned along with St. Peter’s ‘trophy’, by the presbyter Gaius around AD 200. In fact, during excavations in the nineteenth century, archaeologists found a typical first-century grave surrounded by many pagan and Christian tombs, similar to the necropolis unearthed under St. Peter’s Basilica.

We will be going to visit the Basilica of St. Paul Outside the Walls in our upcoming Journey Toward the Face of Christ pilgrimage this coming May/June 2022.