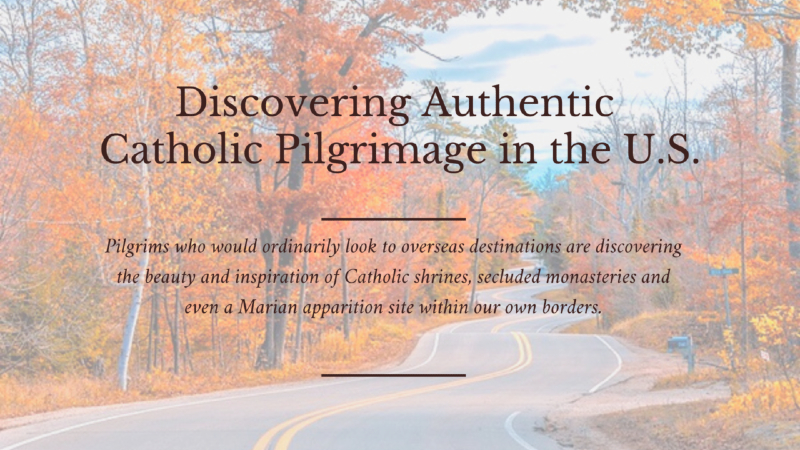 In October 2021, Inside the Vatican Pilgrimages hosted, for the first time, a spiritual journey within the United States, bringing pilgrims to Virginia for The Shenandoah Valley Experience.  This year, we will be offering our first-ever pilgrimage to Wisconsin: Discovering Mary in the Heartland during the glorious autumn days of September.  We hope that these extraordinary new pilgrimages will mark a renewal of authentic pilgrimage within the United States and offer an opportunity to encounter the riches of our Catholic heritage here in our own homeland.

Follow our blog to learn more about our upcoming pilgrimages in the United States.  In today and next week’s posts we will focus on Wisconsin and the unique culture of pilgrimage that has been growing in the Badger State over just this past decade.

Discovering Mary in the Heartland: An authentic Catholic pilgrimage in the U.S.

When most Catholics think of the word “pilgrimage,” they think of places like the Holy Land, or Rome. Some have experienced the Camino de Santiago in Spain; others have ventured to Marian shrines like Fatima and Lourdes.

The pilgrimage route informally known as the “Wisconsin Way” in eastern Wisconsin harbors a wealth of spiritual riches that were, up until recently, little known outside their immediate area.

Covid and its travel restrictions over the past two years have had a hand in changing that.

Now pilgrims who would ordinarily look to overseas destinations are discovering the beauty and inspiration of Catholic shrines, secluded monasteries and even a Marian apparition site within our own borders.

The U.S. does not have a native history or culture of pilgrimage. In fact, predominantly Protestant, and therefore iconoclastic, Americans never really embraced the Catholic idea of pilgrimage to holy sites. Catholicism’s reverence for the material world and tangible manifestations of faith has even been considered “superstitious” by some.

Further, the “Protestant work ethic,” solidified by the Industrial Revolution, has left our culture with the legacy of the “vacation.” People who are required by the prevailing work culture to spend most of their waking hours in the harried pursuit of income are left with only a modicum of time for recreation – literally, “re-creation”: resting and rebuilding their energy and strength for the next round of daily work.