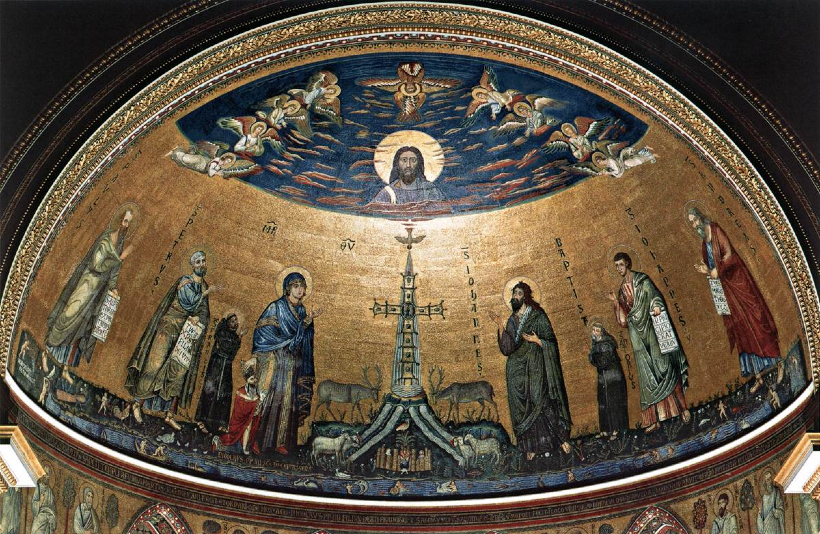 As with the other apse artwork in the major basilicas of Rome, the apse in the Lateran Basilica is a mosaic, not a painting.  This is due to the resistances of mosaics to weathering and aging.

Once again we see, in the photo above, the golden background, representing heaven, with the saints in the heavens.  The saints represented on the left are: St. Paul, St. Peter, a slightly smaller St. Francis of Assisi, and the Blessed Virgin Mother.  There is also a small Pope standing next to the Blessed Virgin, whom the Our Lady is patting on the head.  This tiny pope is Pope Nicolaus IV.  Then, on the right, there are St. John the Baptist, a small St. Anthony of Padua, St. John the Evangelist, and St. Andrew.  Above, the heavens open with cherubim encircling Jesus.

Going downward through the center, just below Jesus is the Holy Spirit with the rays of grace.  There is a cross and four rivers where the sheep, which represent the faithful, come as a source of life.

This cross is different from what we normally see because it is made of compartments with stones, gems, inside.  This is called a Croce Gemmata, or a gemmed/stoned cross.  It would have been such a reliquary of the true cross which St. Helena brought back from Jerusalem during the time of Emperor Constantine.  During Lent, we veil the cross with purple cloth due to its beauty and glory.  Since, on Passion Friday through Holy Saturday, Jesus is dead and hidden from us, we also hide the glory of the cross during the time of sacrifice.

Resource: our Virtual Pilgrimage to the Lateran Basilica (watch on YouTube here)