The Seat of the Bishop of Rome 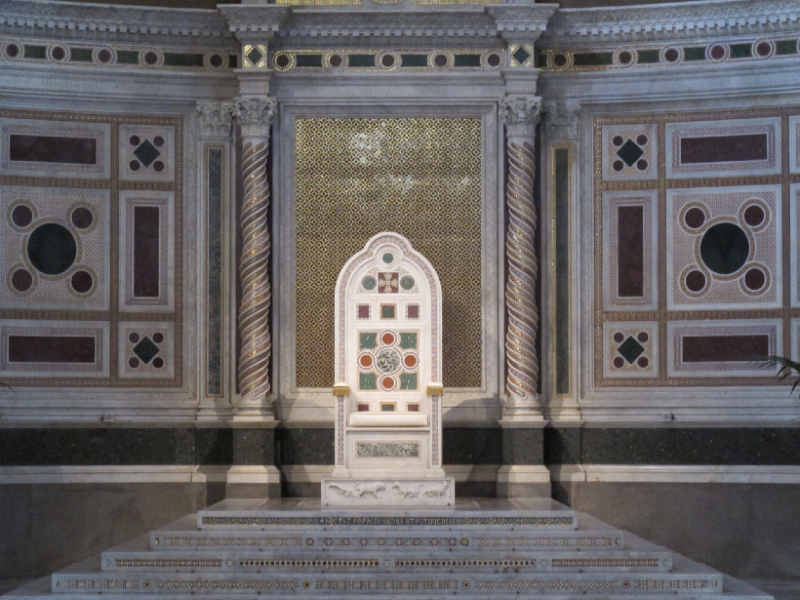 The Papal Throne in the Lateran Basilica

When one hears the term “Papal Throne,” these days most people immediately think of the throne in St. Peter’s Basilica.  The throne in St. Peter’s, however, is not the official Papal Throne.  Even though St. Peter’s gets more attention and is more extravagant, the Lateran Basilica is the actual official Cathedral of Rome.  The whole point of the Lateran Basilica is the chair, or cathedra, of the Bishop of Rome, and, therefore, holds the official seat of the Pope as the Bishop of Rome.

Since the Pope lives in St. Peter’s, it is rare to find him in the Lateran.  Still, the Pope celebrates Mass in his Cathedral most notably on Holy Thursday for the washing of the feet.

The word “cathedral” comes from “cathedra” meaning chair or seat of the teacher.  As the building is named for this furniture, the chair is the most important part of the cathedral.  In the photo above, the importance of the throne is demonstrated by the golden background which, as has been stated in earlier posts, represents heaven.  This background for the Papal Seat reminds onlookers of the divine authority which appoints the Pope as the vicar of Christ. The chair is the center of attention. The stage upon which it is elevated and the columns on either side draws the focus toward the chair.